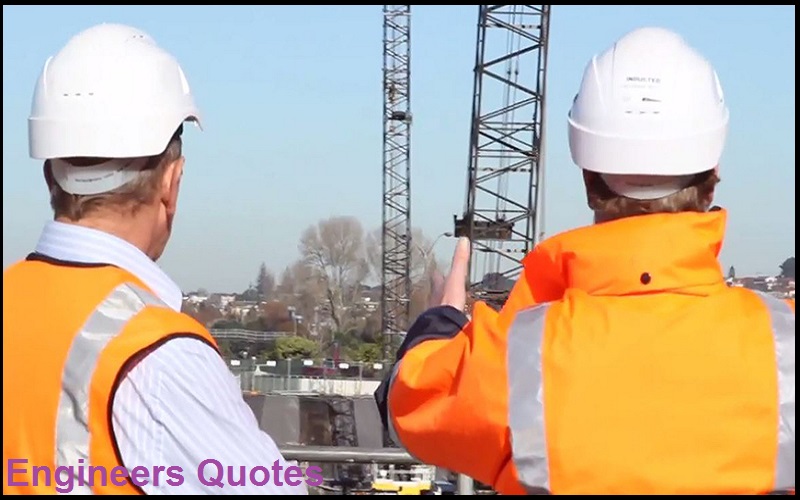 Engineers Quotes:- Engineers, as practitioners of engineering, are professionals who invent, design, analyze, build, and test machines, systems, structures, and materials to fulfill objectives and requirements while considering the limitations imposed by practicality, regulation, safety, and cost.

The word engineer (Latin inventor) is derived from the Latin words ingeniare (“to create, generate, contrive, devise”) and Ingenium (“cleverness”).

“Engineers like to solve problems. If there are no problems handily available, they will create their own problems.”-Scott Adams 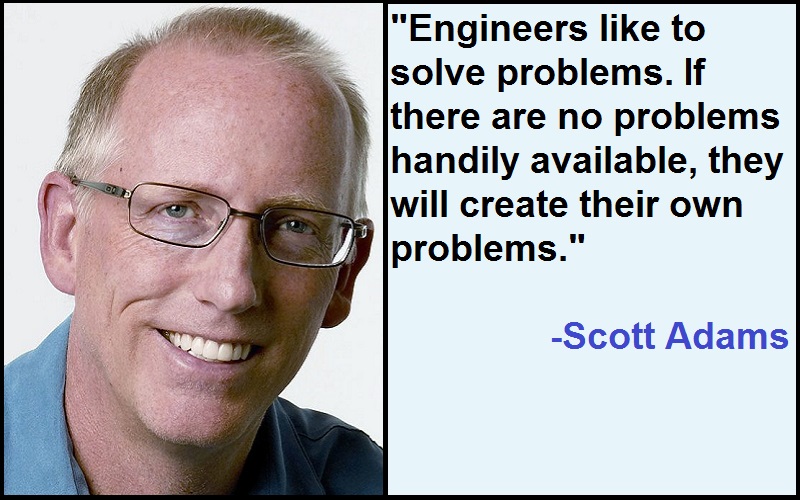 “As engineers, we were going to be in a position to change the world – not just study it.”-Henry Petroski

“Engineers are often defined by their output.”-Dinesh Paliwal

“One has to look out for engineers – they begin with sewing machines and end up with the atomic bomb.”-Marcel Pagnol

“We will employ almost every strategy and hustle in any possible way to recruit top engineers to our team.”-Charles Best

“People keep inventing all these new machines, and producers and recording engineers keep wanting to use them.”-John Prine

“The scientist and engineers who are building the future need the poets to make sense of it.”-Jason Silva

“Engineers have shown to embody a tremendous amount of leadership skills through the collaborative educational environment.”-Dinesh Paliwal

“Growth hackers are typically computer engineers that build great marketing ideas into the product during the development process.”-Ryan Holiday

“More than ever, the world needs good engineers. However, the pool of talent is shrinking not growing.”Dean Kamen

“It will be hard work. It’s always hard work, and hard work from everybody within the team – technical director, mechanics, drivers, engineers – everyone in the team.”-David Leslie

“Silicon Valley has some of the smartest engineers and technology business people in the world.”-Elon Musk

“Most students who take math classes aren’t going to be mathematicians. They’re going to be engineers, statisticians – in many ways, that’s the more important mission of math education.”-Terence Tao

“Somehow we must reintegrate the scientific with the popular and reconnect the future to the present. This is less a job for scientists, engineers, bureaucrats, and administrators and more a job for novelists, moviemakers, popularizers, and politicians.”-Newt Gingrich

“Whether it’s with my engineers in the team, my home life, or my friends, I don’t like things to get complicated – and one good example would be the steering wheel in my Mercedes Formula 1 car.”-Lewis Hamilton

“I had a lot of trouble with engineers because their whole background is learning from a functional point of view, and then learning how to perform that function.”-Brian Eno

“Product management really is the fusion between technology, what engineers do – and the business side.”-Marissa Mayer

“You have students in America, in Britain, who do not want to be engineers. Perhaps it is the workload, I studied engineering, and I know what a grind it is.”-Azim Premji

“Colleges produce more sports therapists than engineers. Perhaps because America is a sporty country: a lot of outdoors.”-Azim Premji

“Ultimately Halcyon needs the greatest scientists and engineers in the world to succeed in its mission.”-Luke Nosek

“Many of the engineers I interviewed worked on reverse-engineering technology. It’s a hallmark of Area 51.”Annie Jacobsen

“I don’t drive by the seat of my pants and happen to win races. I work very hard to interpret the data and drive a certain way. My engineers have confidence in me, and more often than not, when I tell them what I need or what I am feeling with the car, it’s right.”-Lewis Hamilton

“The Startup Act should give all Americans, not just immigrants, a better shot at being tomorrow’s engineers and entrepreneurs. And that opportunity could begin at a young age with education in computer programming.”-Marvin Ammori

“Most kids are not dreaming of being programmers, scientists or engineers.”-will.i.am

“My freshman year in college, I got a job working security. This was a high-tech building in Santa Clara, engineers coming in and out all the time.”Khaled Hosseini

“Engineers are behind the cars we drive, the pills we pop and the way we power our homes.”-James Dyson

“I’ve actually found the image of Silicon Valley as a hotbed of money-grubbing tech people to be pretty false, but maybe that’s because the people I hang out with are all really engineers.”-Linus Torvalds

“I tell my engineers that they should not overload me with information.”-Max Verstappen

“Beaver does better work than the Corps of Engineers.”-Mike Todd

“The STEM-related positions that U.S. industry needs to fill are not just for biochemists, biophysicists, and engineers.”-Rex Tillerson

“Diversifying our tech talent pool is imperative for the tech sector. More diverse engineers and entrepreneurs will bring about a new type of innovation that Silicon Valley has yet to see.”-Mitch Kapor

“Having a scriptable infrastructure requires upfront work but can pay huge dividends in bringing new engineers onto your infra team, as well as helping in disaster-recovery scenarios.”-Mike Krieger

“I love that our engineers are first and foremost ‘Instagram’ users.”-Mike Krieger

“Companies like I.B.M. have offered women scholarships to study engineering for years, and women engineers routinely get higher starting salaries than men.”-Warren Farrell