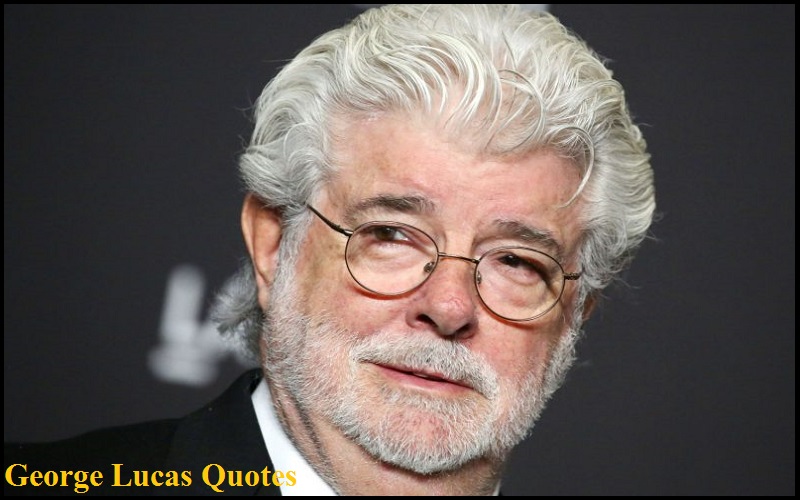 George Lucas Quotes:- George Lucas (born May 14, 1944) is an American filmmaker and entrepreneur. Lucas is known for creating the Star Wars and Indiana Jones franchises and founding Lucasfilm, LucasArts, and Industrial Light & Magic.

He served as chairman of Lucasfilm before selling it to The Walt Disney Company in 2012. After graduating from the University of Southern California in 1967, Lucas co-founded American Zoetrope with filmmaker Francis Ford Coppola.

“Everyone seems to think that digital technology devoids the medium of content, but that is not true at all. If anything, it broadens the content.”-George Lucas 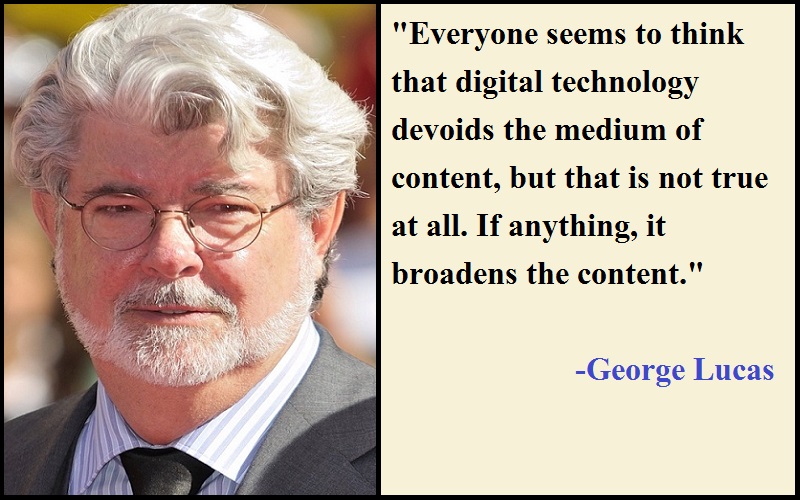 “A film is sort of binary – it either works or it doesn’t work. It has nothing to do with how good a job you do. If you bring it up to an adequate level where the audience goes with the movie, then it works, that is all.”-George Lucas

“One of the amazing things about ‘Seven Samurai’ is that there are a lot of characters. And considering you have so many, and they all have shaved heads, and you’ve got good guys and bad guys and peasants, you get to understand a lot of them without too much being said.”-George Lucas

“The secret is not to give up hope. It’s very hard not to because if you’re really doing something worthwhile I think you will be pushed to the brink of hopelessness before you come through the other side.”–George Lucas

“Whenever you do something, people try to re-do it and do a better version, especially if they’re in another country.”-George Lucas

“Everybody has talent, it’s just a matter of moving around until you’ve discovered what it is.”-George Lucas

“I live a reasonably simple life, off the beaten track.”-George Lucas

“You can’t do it unless you can imagine it.”-George Lucas

“Working hard is very important. You’re not going to get anywhere without working extremely hard.”-George Lucas

“Storytelling is about two things; it’s about character and plot.”-George Lucas

“American Graffiti’ was unpleasant because of the fact that there was no money, no time, and I was compromising myself to death.”-George Lucas

“Part of the issue of achievement is to be able to set realistic goals, but that’s one of the hardest things to do because you don’t always know exactly where you’re going, and you shouldn’t.”-George Lucas

“The story is told in ‘Star Wars’ is a classic one. Every few hundred years, the story is retold because we have a tendency to do the same things over and over again. Power corrupts, and when you’re in charge, you start doing things that you think are right, but they’re actually not.”-George Lucas

“If the boy and girl walk off into the sunset hand-in-hand in the last scene, it adds 10 million to the box office.”-George Lucas

“Good luck has its storms.”-George Lucas

“Football games are on TV, and it doesn’t affect stadium attendance at all. It’s the same with movies. People who really love movies and like to go out on a Saturday night will go to the movie theater.”-George Lucas

“One thing about ‘Star Wars’ that I’m really proud of is that it expands the imagination. That’s why I like ‘Star Wars’ toys.”-George Lucas

“I’ve come to the conclusion that mythology is really a form of archaeological psychology. Mythology gives you a sense of what people believe, what they fear.”-George Lucas

“Digital technology allows us a much larger scope to tell stories that were pretty much the grounds of the literary media.”-George Lucas

“I am simply trying to struggle through life; trying to do God’s bidding.”-George Lucas

“The technology keeps moving forward, which makes it easier for the artists to tell their stories and paint the pictures they want.”-George Lucas

“For ‘Star Wars’ I had to develop a whole new idea about special effects to give it the kind of kinetic energy I was looking for. I did it with motion-control photography.”-George Lucas

“A lot of people like to do certain things, but they’re not that good at it. Keep going through the things that you like to do until you find something that you actually seem to be extremely good at. It can be anything.”-George Lucas

“I was never interested in being powerful or famous. But once I got to film school and learned about movies, I just fell in love with it. I didn’t care what kind of movies I made.”-George Lucas

“Although I write screenplays, I don’t think I’m a very good writer.”-George Lucas

“Making a film is like putting out a fire with a sieve. There are so many elements, and it gets so complicated.”-George Lucas

“If you look at ‘Blade Runner,’ it’s been cut sixteen ways from Sunday, and there are all kinds of different versions of it.”-George Lucas

“When I was making ‘Star Wars,’ I wasn’t restrained by any kind of science. I simply said, ‘I’m going to create a world that’s fun and interesting, makes sense, and seems to have a reality to it.'”-George Lucas

“I started out in anthropology, so to me how society works, how people put themselves together and make things work, has always been a big interest.”-George Lucas

“There should be a point to movies. Sure, you’re giving people a diversion from the cold world for a bit, but at the same time, you pass on some facts and rules and maybe a little bit of wisdom.”-George Lucas

“I’ve always been a follower of silent movies. I see the film as a visual medium with a musical accompaniment, and dialogue is a raft that goes on with it.”-George Lucas

“I’m one of those people who says, ‘yes, cinema died when they invented sound.”-George Lucas

“I thought Star Wars was too wacky for the general public.”-George Lucas

“When you are a beginning filmmaker you are desperate to survive. The most important thing, in the end, is survival and being able to get to your next picture.”-George Lucas

“The film is not an easy occupation. There’s a lot of occupations that are difficult and the film is one of them.”-George Lucas

“To be renewed is everything. What more could one ask for than to have one’s youth back again?”-George Lucas

“It’s hard work making movies. It’s like being a doctor: you work long hours, very hard hours, and it’s emotional tense work. If you don’t really love it, then it ain’t worth it.”-George Lucas

“Changes are not unusual – I mean, most movies, when they release them, they make changes. But somehow, when I make the slightest change, everybody thinks it’s the end of the world.”-George Lucas

“I am a giant proponent of giant screens. But I accept the fact that most of my movies are going to be seen on phones.”-George Lucas

“I wanted to race cars. I didn’t like school, and all I wanted to do was work on cars. But right before I graduated, I got into a really bad car accident, and I spent that summer in the hospital thinking about where I was heading. I decided to take education more seriously and go to a community college.”-George Lucas

“There’s no difference between movies and television. None at all. Except in a lot of cases, television’s much better than movies.”-George Lucas

“I grew up in San Francisco. And so I’m informed in a certain kind of way about, you know, believing in democracy and believing in America. And I’m a very ardent patriot.”-George Lucas

“‘Young Indiana Jones’ was one of the happiest times I ever had, so I love television.”-George Lucas

“I realized why directors are such horrible people – in a way – because you want things to be right, and people will just not listen to you, and there is no time to be nice to people, no time to be delicate.”-George Lucas

“In 3-D filmmaking, I can take images and manipulate them infinitely, as opposed to taking still photographs and laying them one after the other. I move things in all directions. It’s such a liberating experience.”-George Lucas

“I was going to go to a four-year college and be an anthropologist or to an art school and be an illustrator when a friend convinced me to learn photography at the University of Southern California. Little did I know it was a school that taught you how to make movies! It had never occurred to me that I’d ever had any interest in filmmaking.”-George Lucas