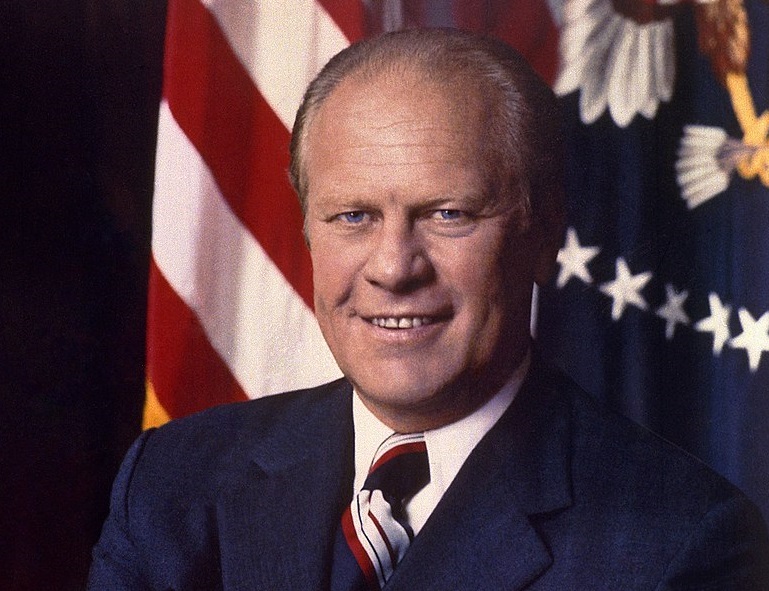 
Born in Omaha, Nebraska, and raised in Grand Rapids, Michigan, Ford attended the University of Michigan and Yale Law School. After the attack on Pearl Harbor, he enlisted in the U.S. Naval Reserve, serving from 1942 to 1946; he left as a lieutenant commander. Ford began his political career in 1949 as the U.S. representative from Michigan’s 5th congressional district. He served in this capacity for 25 years, the final nine of them as the House Minority Leader.

“A coalition of groups is waging a massive propaganda campaign against the president of the United States. an all-out attack. Their aim is a total victory for themselves and total defeat for him.”-Gerald R. Ford 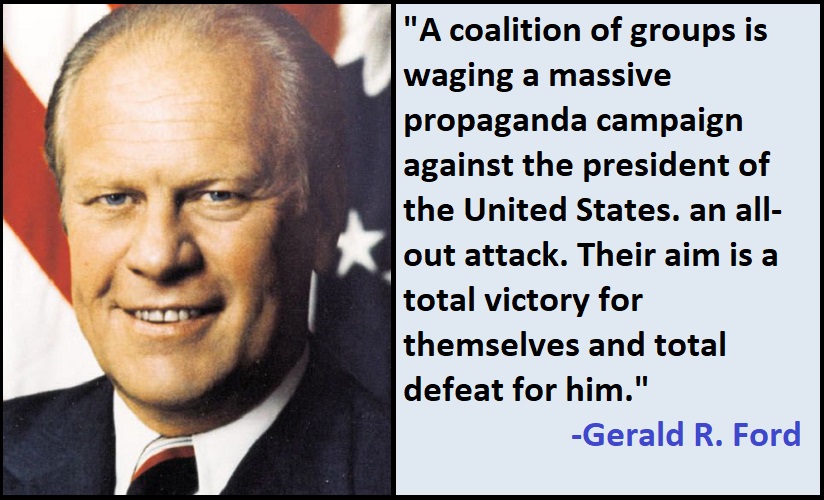 “All my children have spoken for themselves since they first learned to speak, and not always with my advance approval, and I expect that to continue in the future.”-Gerald R. Ford

“Even though this is late in an election year, there is no way we can go forward except together and no way anybody can win except by serving the people’s urgent needs. We cannot stand still or slip backward. We must go forward now together.”-Gerald R. Ford

“For millions of men and women, the church has been the hospital for the soul, the school for the mind and the safe depository for moral ideas.”-Gerald R. Ford

“History and experience tell us that moral progress comes not in comfortable and complacent times, but out of trial and confusion.”-Gerald R. Ford

“I am acutely aware that you have not elected me as your President by your ballots, so I ask you to confirm me with your prayers.”-Gerald R. Ford

“I cannot imagine any other country in the world where the opposition would seek, and the chief executive would allow, the dissemination of his most private and personal conversations with his staff, which, to be honest, do not exactly confer sainthood on anyone concerned.”-Gerald R. Ford

“I feel it is my first duty to make an unprecedented compact with my countrymen. Not an inaugural address, not a fireside chat, not a campaign speech – just a little straight talk among friends.”-Gerald R. Ford

“I had a lot of experience with people smarter than I am.”-Gerald R. Ford

“I had pro offers from the Detroit Lions and Green Bay Packers, who were pretty hard up for linemen in those days. If I had gone into professional football the name Jerry Ford might have been a household word today.”-Gerald R. Ford

“I have had a lot of adversaries in my political life, but no enemies that I can remember.”-Gerald R. Ford

“I know I am getting better at golf because I am hitting fewer spectators.”-Gerald R. Ford

“I love sports. Whenever I can, I always watch the Detroit Tigers on the radio.”-Gerald R. Ford

“I watch a lot of baseball on the radio.”-Gerald R. Ford

“I would hope that understanding and reconciliation are not limited to the 19th hole alone.”-Gerald R. Ford

“If Lincoln were alive today, he’d be turning over in his grave.”-Gerald R. Ford

“In all my public and private acts as your president, I expect to follow my instincts of openness and candor with full confidence that honesty is always the best policy in the end.”-Gerald R. Ford

“It’s the quality of the ordinary, the straight, the square, that accounts for the great stability and success of our nation. It’s a quality to be proud of. But it’s a quality that many people seem to have neglected.”-Gerald R. Ford

“May our former president, who brought peace to millions, find it for himself.”-Gerald R. Ford

“My commitment to the security and future of Israel is based upon basic morality as well as enlightened self-interest. Our role in supporting Israel honors our own heritage.”-Gerald R. Ford

“Our Constitution works; our great republic is a government of laws and not of men. Here, the people rule.”-Gerald R. Ford

“Tell the truth, work hard, and come to dinner on time.”-Gerald R. Ford

“The pat on the back, the arm around the shoulder, the praise for what was done right and the sympathetic nod for what wasn’t are as much a part of golf as life itself.”-Gerald R. Ford

“The political lesson of Watergate is this: Never again must America allow an arrogant, elite guard of political adolescents to by-pass the regular party organization and dictate the terms of a national election.”-Gerald R. Ford

“There are no adequate substitutes for father, mother, and children bound together in a loving commitment to nurture and protect. No government, no matter how well-intentioned, can take the place of the family in the scheme of things.”-Gerald R. Ford

“Things are more like today than they have ever been before.”-Gerald R. Ford

“Truth is the glue that holds the government together.”-Gerald R. Ford

“When a man is asked to make a speech, the first thing he has to decide is what to say.”-Gerald R. Ford