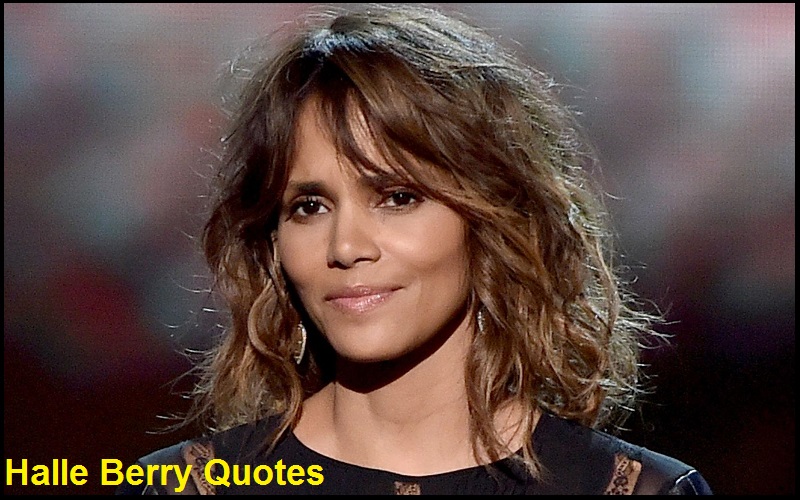 “The man for me is the cherry on the pie. But I’m the pie and my pie is good all by itself. Even if I don’t have a cherry.”-Halle Berry 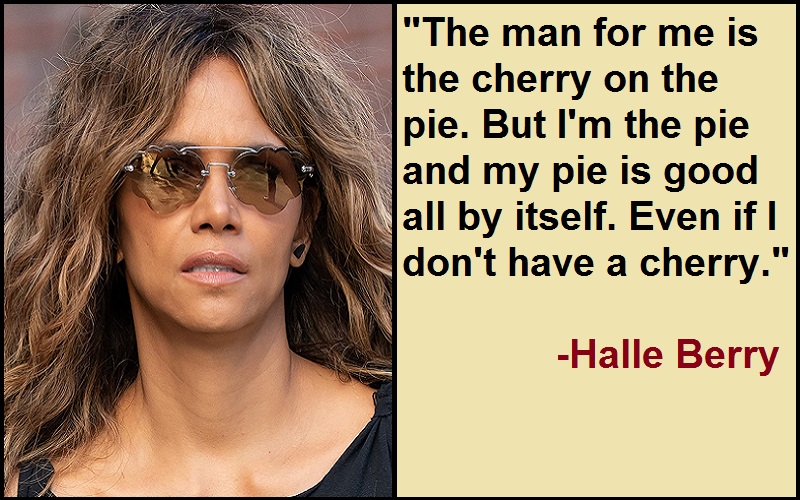 “The man for me is the cherry on the pie. But I’m the pie and my pie is good all by itself. Even if I don’t have a cherry.”-Halle Berry

“Let me tell you something – being thought of as a beautiful woman has spared me nothing in life. No heartache, no trouble. Love has been difficult. Beauty is essentially meaningless and it is always transitory.”-Halle Berry

“When I was a kid, my mother told me that if you could not be a good loser, then there’s no way you could be a good winner.”-Halle Berry

“If you set out to do something and you give it your all and it doesn’t work out, be willing to modify your goal slightly. Have the ability to look in another direction. A small shift could guide you to the real purposes of your life.”-Halle Berry

“The first step is clearly defining what it is you’re after because without knowing that, you’ll never get it.”-Halle Berry

“I won’t have a traditional marriage; I don’t find the value in that anymore. But I am such a hopeless romantic and I really want love and I want a committed relationship, so I am going to reinvent marriage for myself.”-Halle Berry

“In a perfect world, I would be a painter. I love working with my hands. I don’t get to do it as much as I like, but I am finding a way to make more time as life goes on because it’s a really great outlet for me to express myself.”-Halle Berry

“I never wanted to be a model. My modeling career was nothing but a stepping stone to my acting career and that’s all I ever saw it as. A pointless rock in the river that has to be stepped on in order to get to the meaningful oasis of acting.”-Halle Berry

“What’s the worst that can happen? If it doesn’t do well I can put on my big girl panties, deal with it and move on.”-Halle Berry

“I think I am at my best when my hair is short. It’s easier to take care of and more of who I am. Women are conditioned to think we need long hair.”-Halle Berry

“I know I’m only one human being and I’m only making one tiny contribution and it’s nothing more than that.”-Halle Berry

“You have to get the audience invested even if you’re doing something that they think is dumb, it’s kind of what these movies are all about.”-Halle Berry

“I don’t see a white woman. I see a black woman, even though my mother is white. Knowing that has made my life easier, I think.”-Halle Berry

“There’s a place in me that can really relate to being the underdog.”-Halle Berry

“In the X-Men, the women are so strong and sexy! We really kick some male butt!”-Halle Berry

“I’m learning to accept the lack of privacy as the real downer in my profession.”-Halle Berry

“By the time I left school, I had a lot of tenacity.”-Halle Berry

“After all, everybody has secrets and there are some things that nobody knows about you but only you, right?”-Halle Berry

“It is very hard to separate one’s self from a character. Sometimes the people closest to me have to be very understanding.”-Halle Berry

“I’m done with men… I’m going to be alone. I have no luck with relationships. I don’t think I’m made for marriage.”-Halle Berry

“Self-esteem comes from who you have in your life. How you were raised. What you struggled with as a child.”-Halle Berry

“I was black growing up in an all-white neighborhood, so I felt like I just didn’t fit in. Like I wasn’t as good as everybody else, or as smart, or whatever.”-Halle Berry

“I think we have become obsessed with beauty and personally, I’m really saddened by the way women mutilate their faces today in search of that.”-Halle Berry

“I see women in their 30s getting plastic surgery, pulling this up and tucking that back. It’s like a slippery slope – once you start you pull one thing one way and then you think, ‘Oh my God, I’ve got to do the other side.”-Halle Berry

“Every story about me is so heavy and dramatic. That’s not how I do life. But that’s the impression people have, and that’s what keeps getting reiterated. As if I’m still stuck in all the muck of the past. And I am so not.”-Halle Berry

“People win ‘Oscars’, and then it seems like they fall off the planet. And that’s partly because a huge expectation walks in the room and sits right down on top of your head.”-Halle Berry

“I don’t think I’m unlike a lot of people. I am just someone who is trying to find that mate, and I think it’s a really hard thing to do.”-Halle Berry

“Career is important, but nothing really supersedes my roles as a mother.”-Halle Berry

“You think you know what love is – until you have a child and discover that unconditional mother love.”-Halle Berry

“I’m not the girl for super high fashion because I don’t have the right body. When I want to get dressed up, I’m a Roberto Cavalli girl.”-Halle Berry