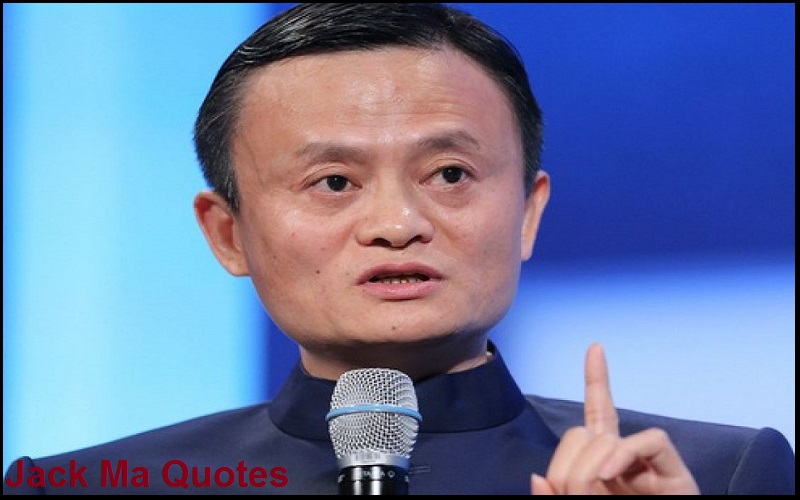 Jack Ma Quotes:- Jack Ma, or Ma Yun (born 10 September 1964), is a retired Chinese business magnate, investor, politician, and philanthropist. He is the co-founder and former executive chair of Alibaba Group, a multinational technology conglomerate. Ma is a strong proponent of an open and market-driven economy.

A prominent business figure, Ma is seen as a global ambassador for Chinese business and as such is frequently listed as one of the world’s most powerful people by Forbes. He also serves as a role model for startup businesses.

“Help young people. Help small guys. Because small guys will be big. Young people will have the seeds you bury in their minds, and when they grow up, they will change the world.”-Jack Ma 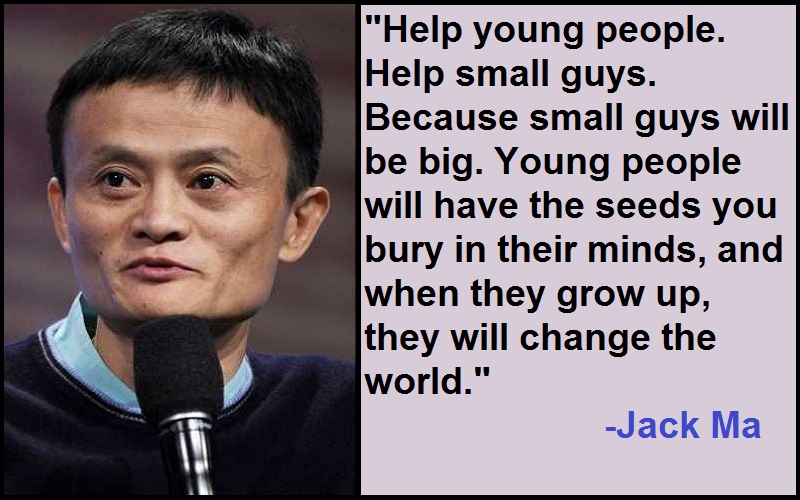 “We should keep on going along the path of globalization. Globalization is good… when trade stops, war comes.”-Jack Ma

“When I am myself, I am happy and have a good result.”-Jack Ma

“You should learn from your competitor but never copy. Copy and you die.”-Jack Ma

“Spending money is much more difficult than making money.”-Jack Ma

“As a business person, I want the world to share prosperity together.”-Jack Ma

“When I was 12 years old, I went swimming in a lake, and I almost died in that lake because the water was too deep – much deeper than I thought.”-Jack Ma

“There are big problems that change the world. If we are working together, that will make us understand each other, appreciate each other, help each other.”-Jack Ma

“The competition between me and Bill Gates, probably: Who can spend money more effectively that can do better philanthropy.”-Jack Ma

“Today the financial market is no good, but the money is there.”-Jack Ma

“My vision is to build an e-commerce ecosystem that allows consumers and businesses to do all aspects of business online.”-Jack Ma

“I like to play cards. I’m not very good, because I don’t want to calculate, I just play by instinct. But I’ve learned a lot of business philosophy by playing poker.”-Jack Ma

“My job is to help more people have jobs.”-Jack Ma

“I’m not a tech guy. I’m looking at the technology with the eyes of my customers, normal people’s eyes.”-Jack Ma

“When I was 12 years old, I got interested in learning English.”-Jack Ma

“The American multinational companies made millions and millions of dollars from globalization.”-Jack Ma

“I flunked my exam for university two times before I was accepted by what was considered my city’s worst university, Hangzhou Teachers University. I was studying to be a high school English teacher. In my university, I was elected student chairman and later became chairman of the city’s Students Federation.”-Jack Ma

“When I was starting out, I thought about how the Internet is global and that we should have a global name, a name that’s interesting. At that time, the best name was Yahoo! Suddenly I thought, ‘Alibaba is a good name.'”-Jack Ma

“I don’t care about revenues.”-Jack Ma

“The more I come to know about the outside world’s perception of China, the more I feel there are all sorts of misunderstandings, and to a certain extent, people do not get the full picture from the media. A lot of foreigners have few opportunities to visit China, and a lot of Chinese people do not have the chance to go to Europe or to the West.”-Jack Ma

“I want people to learn what democracy means.”-Jack Ma

“I believe the most important thing for the media is to be objective, fair, and balanced. We should not report a story with preconceptions or prejudice.”-Jack Ma

“You, American people, worry too much about the China economy. Every time you think China is a problem, we get better, but when you have a high expectation for China, China is always a problem.”-Jack Ma

“Alibaba is an ecosystem that helps small business to grow.”-Jack Ma

“China is still the fastest growing economy in the world, but we need to learn how to use money in a better way, and it’s about quality, not quantity.”-Jack Ma

“It’s not that other countries steal jobs from you guys. It’s your strategy. Distribute the money and things in a proper way.”-Jack Ma

“Asia is changing, and China is changing. ‘Post’ will have great opportunities. With its access to Alibaba’s resources, data, and all the relationships in our ecosystem, the ‘Post’ can report on Asia and China more accurately compared with other media that have no such access.”-Jack Ma

“A startup for entrepreneurs is like a baby, and I have five babies so far – experienced father.”-Jack Ma

“I respect Apple. It’s a great company that changed the world, especially the mobile time.”-Jack Ma

“If Alibaba cannot become a Microsoft or Wal-Mart, I will regret it for the rest of my life.”-Jack Ma

“People think, ‘Jack, you do too much.”-Jack Ma

“What kind of business world are we living in?”-Jack Ma

“I don’t shop online, but my wife buys everything at home. We buy sea crabs, fresh crabs, all kinds of things.”-Jack Ma

“I don’t want people in China to have deep pockets but shallow minds.”-Jack Ma

“I want to change history, do something important in my life, and influence individuals as we have with millions of small businesses on Alibaba. Then they love and respect you because you made their life important.”-Jack Ma

“eBay is a great company. There are a lot of good assets and good customers, and the U.S. people love it.”-Jack Ma

“If the ‘Post’ can play the role of a connector between the West and the East, I have confidence in the paper’s future success.”-Jack Ma

“Every government says they love small businesses, but what have they done for them? We should pull down all the barriers.”-Jack Ma

“Trade is a communication of cultures and values.”-Jack Ma

“The difference between Amazon and us is Amazon is more like an empire – everything they control themselves, buy and sell.”-Jack Ma

“Our philosophy is, using internet technology, we can make every company become Amazon.”-Jack Ma

“Helping to do business easier, we choose the name Alibaba because it is a global company. It is founded in China, but it was created for the world.”-Jack Ma

“A trade war would be a disaster for the world. It’s very easy to slip into a trade war.”-Jack Ma

“IBM, Microsoft, the profit they made was larger than the top four banks in China put together… But where did the money go?”-Jack Ma

“The name Jack was given by an American tourist.”-Jack Ma

“China’s government is so strong on investment, so strong on exporting, but they’re too weak on domestic consumption.”-Jack Ma

“Consumption is still going up on Alibaba. This is because when the economy goes down people look online to Alibaba to buy cheaper things.”-Jack Ma

“It’s impossible for China to keep 10 to 15% growth annually. The economy needed to slow down, and we have to learn to slow down.”-Jack Ma

“I think U.S. and Chinese businesses need a common language and dialogue.”-Jack Ma