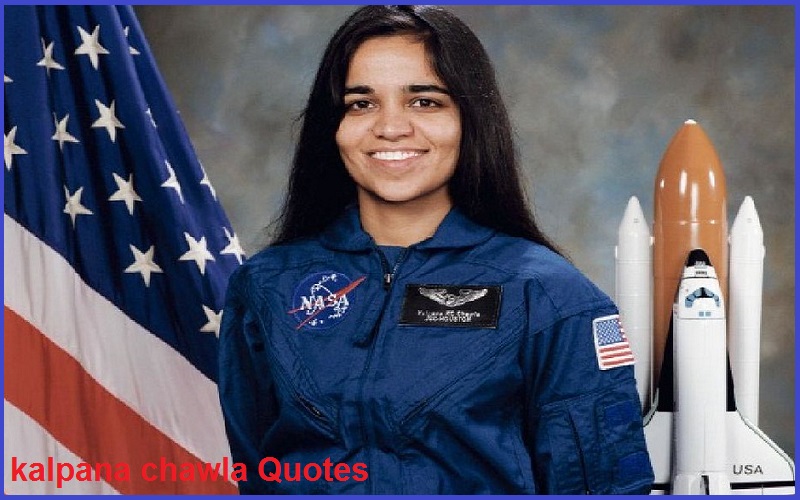 Kalpana Chawla Quote:- Kalpana Chawla (July 1, 1961 – February 1, 2003) was an American astronaut, engineer, and the first woman of Indian descent to go to space.

Chawla was posthumously awarded the Congressional Space Medal of Honor, and several streets, universities, and institutions have been named in her honor. The late astronaut is recognized as a national hero in India.

“Do something because you really want to do it. If you’re doing it just for the goal and don’t enjoy the path, then I think you’re cheating yourself.”-Kalpana Chawla 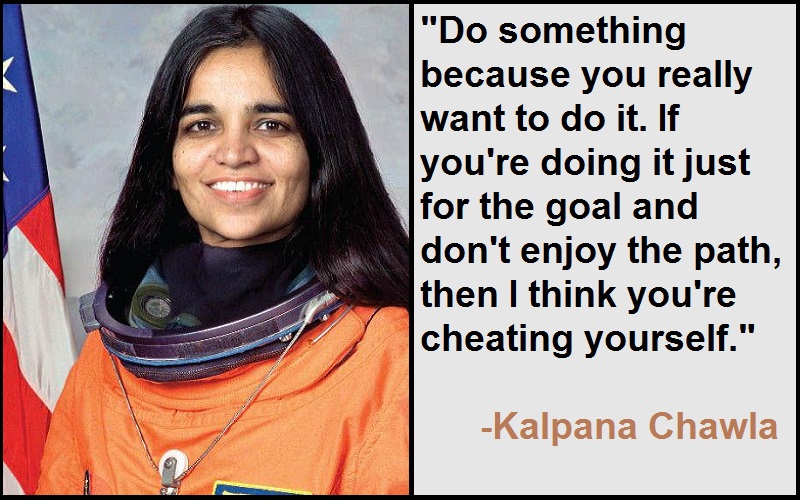 “The quickest way may not necessarily be the best.”-Kalpana Chawla

“You are just your intelligence.”-Kalpana Chawla

“The path from dreams to success does exist. May you have the vision to find it, the courage to get on to it, and the perseverance to follow it.”-Kalpana Chawla

“I was interested in aerospace and flying, and the U.S. is really the best place in the world for flying.”-Kalpana Chawla

“If you want to do something, what does it matter where you are ranked?”-Kalpana Chawla

“You must enjoy the journey because whether or not you get there, you must have fun on the way.”-Kalpana Chawla

“The journey matters as much as the goal.”-Kalpana Chawla

“I stopped thinking about it after trying to figure out what are the lessons learned, and there are so many. After I had basically sorted that out, I figured it’s time to really look at the future and not at the past.”-Kalpana Chawla

“When you look at the stars and the galaxy, you feel that you are not just from any particular piece of land, but from the solar system.”-Kalpana Chawla

“I don’t know why I always liked aerospace engineering. I was in the 10th grade when I figured that’s what I wanted to do.”-Kalpana Chawla

“We crossed the Himalayas in less than two minutes, and then you realize, ‘Oh My God, within an hour and a half, we have gone around the whole planet.”-Kalpana Chawla

“I would say if you have a dream, follow it. It doesn’t really matter whether you are a woman or from India or from wherever.”-Kalpana Chawla

“Every once in a while, we’d ask my dad if we could get a ride in one of these planes. And, he did take us to the flying club and get us a ride in the Pushpak and a glider that the flying club had.”-Kalpana Chawla

“The list of what I want to do is so long, I would need a few lifetimes to achieve them. For instance, I would like to fly small planes, maybe over the Ganges one day.”-Kalpana Chawla

“Material interests are not the only guiding light.”-Kalpana Chawla

“When you lift off, the pressure is supposed to be maximum. But actually, it was very benign. Very enjoyable. But as soon as the engines cut off and you get to zero gravity, you felt as if you were being pushed off your seat. You feel disoriented. You don’t feel aligned with anything. I felt for a few good hours that I was falling.”-Kalpana Chawla

“The first view of the Earth is magical. It is a very overpowering realization that the Earth is so small. It affected me. I could not get over the notion that in such a small planet, with such a small ribbon of life, so much goes on. It is as if the whole place is sacred.”-Kalpana Chawla