Keri Russell Quotes:- Keri Russell (born March 23, 1976) is an American actress and dancer. She came to fame for portraying the title role of Felicity Porter on the WB drama series Felicity (1998–2002), for which she won a Golden Globe Award.

Russell first appeared on television at age 15 as a cast member of the All-New Mickey Mouse Club variety show on the Disney Channel.

She was on the show from 1991 to 1994 (Seasons 4–6) and co-starred with future actor Ryan Gosling and future pop stars Christina Aguilera, Britney Spears, JC Chasez, Justin Timberlake, and Tony Lucca.

“Acting happened to me. If I had pursued it, I think it would have been like someone going to a bar, desperately looking for love and not finding anyone.“-Keri Russell 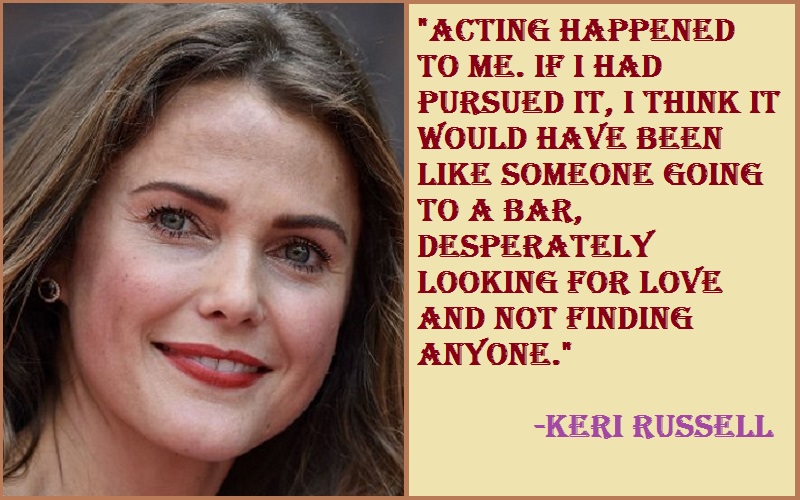 “Acting is a strange profession, and, yes, sometimes I struggle with its worth, its value in the world.”-Keri Russell

“Anything that opens you up emotionally is going to impact your acting. Parenthood, becoming a mom, certainly does that.”-Keri Russell

“Dance has helped me with everything. It was a great foundation for discipline, hard work and, unfortunately, the ever-elusive idea of perfection. It lends itself easily to fight choreography because that’s what it really is. Choreography. And knowing how to move with someone.”-Keri Russell

“Dance is definitely what I love doing much more than anything else.”-Keri Russell

“I am crazy for dessert. I eat everything. No one should be denied anything… just don’t eat the whole thing.”-Keri Russell

“I am literally the worst person at keeping secrets. I’d be the worst spy of all time.”-Keri Russell

“I am positive I was not a neglected child. I remember reading ‘The Jungle Book’ and ‘The Sleeping Beauty.”-Keri Russell

“I don’t have time for any special skin routines. Many a night I go to bed with the gloppy mascara and all.”-Keri Russell

“I don’t think I ate a green vegetable until I was 30. I didn’t grow up with a mom who enforced that at all.”-Keri Russell

“I love doing laundry! It’s so satisfying. I love the way it smells. I love doing the sheets.”-Keri Russell

“I think people like to be thrilled and excited. And a scary movie is a safe way to do that because you’re not actually doing it. It’s entertainment. You know that you’re in the confines of this two-hour space of safety in the movie house.”-Keri Russell

“I want to be able to raise my kid. I was totally being a martyr about it at first, thinking I could totally do it on my own, which I did for a while. I’ve hired a babysitter before, but as for a full-time caregiver… for a control freak like me, it ain’t gonna happen!”-Keri Russell

“I was a huge fan of ‘Arrested Development,’ and there’s just something it tickles in me and it’s bright and it’s hilarious.”-Keri Russell

“I would splurge on a great pair of high heels” because you can wear them to something fancy, but regular clothes? I’d rather go on a trip than spend $10,000 on clothes, and fly first class as a treat.”-Keri Russell

“I’m naturally thin, so I don’t have to work too hard at it. I love food, but I also love to work out. I think it makes everything work better.”-Keri Russell

“I’m not okay when I have to be around everyone all the time.”-Keri Russell

“It’s sad when girls think they don’t have anything going on except being pretty.”-Keri Russell

“People – not just in their teenage years – hold on to this fantasy of love when they’re not ready to have a real relationship.”-Keri Russell

“People expect all women to react the same to pregnancy. But anyone who’s been around pregnant women knows that it’s not all cutesy and sweet. You spaz out and you’re angry and you have tantrums.”-Keri Russell

“People still take it really personally. They come up to me at breakfast places like, ‘When are you growing your hair back?”-Keri Russell

“Personally, I’m a real wimp with scary movies. I get so scared.”-Keri Russell

“Sometimes it’s the smallest decisions that can change your life forever.”-Keri Russell

“When I was on the ‘Mickey Mouse Club,’ there was Britney Spears, Justin Timberlake, and Ryan Gosling and Christine Aguilera. But they were 12 and I was 17, so there was a bit of an age difference.”-Keri Russell

“Who knows? Maybe years from now I’ll be on a ranch in Colorado with 10 kids. The whole point of life is to experience a little bit of everything, and I think it’s better when there are a few surprises thrown in.”-Keri Russell

“Yeah, I like being on my own. I do. I tend to be a loner, so I’m okay. I’m not okay when I have to be around everyone all the time.”-Keri Russell