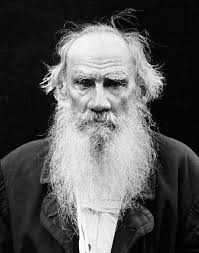 Leo Tolstoy Quotes:- Count Lev Nikolayevich Tolstoy, usually referred to in English as Leo Tolstoy, was a Russian writer who is regarded as one of the greatest authors of all time. Born to an aristocratic Russian family in 1828, he is best known for the novels War and Peace and Anna Karenina often cited as pinnacles of realist fiction.

9 September 1828, Leo Tolstoy was born in Tula Province, Russia. In the 1860s, he wrote his first great novel, War and Peace. In 1873, Tolstoy set to work on the second of his best-known novels, Anna Karenina. Tolstoy died on 20 November 1910 in Astapovo, Russia. 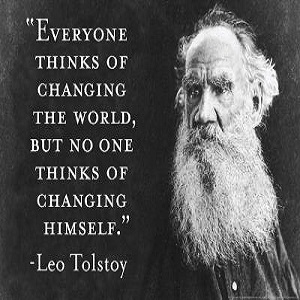 “A man can live and be healthy without killing animals for food; therefore, if he eats meat, he participates in taking animal life merely for the sake of his appetite.”-Leo Tolstoy

“All happy families resemble one another, each unhappy family is unhappy in its own way.”-Leo Tolstoy

“All violence consists of some people forcing others, under threat of suffering or death, to do what they do not want to do.”-Leo Tolstoy

“An arrogant person considers himself perfect. This is the chief harm of arrogance. It interferes with a person’s main task in life – becoming a better person.”-Leo Tolstoy

“And all people live, Not by reason of any care they have for themselves, But by the love for them that is in other people.”-Leo Tolstoy

“Art is not a handicraft, it is the transmission of feeling the artist has experienced.”-Leo Tolstoy

“Boredom: the desire for desires.”-Leo Tolstoy

“Even in the valley of the shadow of death, two and two do not make six.”-Leo Tolstoy

“Faith is the sense of life, that sense by virtue of which man does not destroy himself, but continues to live on. It is the force whereby we live.”-Leo Tolstoy

“Government is an association of men who do violence to the rest of us.”-Leo Tolstoy

“He never chooses an opinion; he just wears whatever happens to be in style.”-Leo Tolstoy

“Historians are like deaf people who go on answering questions that no one has asked them.”-Leo Tolstoy

“I sit on a man’s back, choking him and making him carry me, and yet assure myself and others that I am very sorry for him and wish to ease his lot by all possible means – except by getting off his back.”-Leo Tolstoy

“If so many men, so many minds, certainly so many hearts, so many kinds of love.”-Leo Tolstoy

“If there existed no external means for dimming their consciences, one-half of the men would at once shoot themselves, because to live contrary to one’s reason is a most intolerable state, and all men of our time are in such a state.”-Leo Tolstoy

“If you want to be happy, be.”-Leo Tolstoy

“In all history“, there is no war which was not hatched by the governments, the governments alone, independent of the interests of the people, to whom war is always pernicious even when successful.”-Leo Tolstoy

“In the name of God, stop a moment, cease your work, look around you.”-Leo Tolstoy

“It is amazing how complete is the delusion that beauty is goodness.”-Leo Tolstoy

“Joy can only be real if people look upon their life as a service and have a definite object in life outside themselves and their personal happiness.”-Leo Tolstoy

“Man lives consciously for himself, but is an unconscious instrument in the attainment of the historic, universal, aims of humanity.”-Leo Tolstoy

“Music is the shorthand of emotion.”-Leo Tolstoy

“One of the first conditions of happiness is that the link between Man and Nature shall not be broken.”-Leo Tolstoy

“Our body is a machine for living. It is organized for that, it is its nature. Let life go on in it unhindered and let it defend itself.”-Leo Tolstoy

“The changes in our life must come from the impossibility to live otherwise than according to the demands of our conscience not from our mental resolution to try a new form of life.”-Leo Tolstoy

“The chief difference between words and deeds is that words are always intended for men for their approbation, but deeds can be done only for God.”-Leo Tolstoy

“The greater the state, the more wrong and cruel its patriotism, and the greater is the sum of suffering upon which its power is founded.”-Leo Tolstoy

“The law condemns and punishes only actions within certain definite and narrow limits; it thereby justifies, in a way, all similar actions that lie outside those limits.”-Leo Tolstoy

“The sole meaning of life is to serve humanity.”-Leo Tolstoy

“The two most powerful warriors are patience and time.”-Leo Tolstoy

“There is no greatness where there is no simplicity, goodness, and” truth.”-Leo Tolstoy

“To say that a work of art is good, but incomprehensible to the majority of men, is the same as saying of some kind of food that it is very good but that most people can’t eat it.”-Leo Tolstoy

“Truth, like gold, is to be obtained not by its growth, but by washing away from it all that is not gold.”-Leo Tolstoy

“War is so unjust and ugly that all who wage it must try to stifle the voice of conscience within themselves.”-Leo Tolstoy

War, on the other hand,” is such a terrible thing, that no man, especially a Christian man, has the right to assume the responsibility of starting it.”-Leo Tolstoy

“We lost because we told ourselves we lost.”-Leo Tolstoy

“We must not only cease our present desire for the growth of the state, but we must desire its decrease, it is” weakening.”-Leo Tolstoy

“Without knowing what I am and why I am here, life is impossible.”-Leo Tolstoy