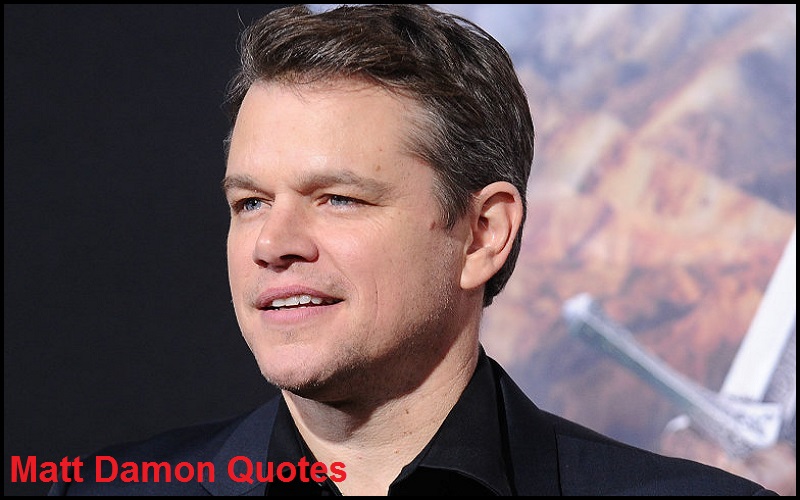 Matt Damon Quotes:- Matt Damon (born October 8, 1970) is an American actor, film producer, and screenwriter. He is ranked among Forbes magazine’s most bankable stars and is one of the highest-grossing actors of all time.

Damon has received various accolades, including an Academy Award from five nominations, two Golden Globe Awards from eight nominations, and has been nominated for three British Academy Film Awards and seven Emmy Awards.

“I’m not Brad Pitt or George Clooney. Those guys walk into a room and the room changes. I think there’s something more… not average, but everyman about me.”-Matt Damon 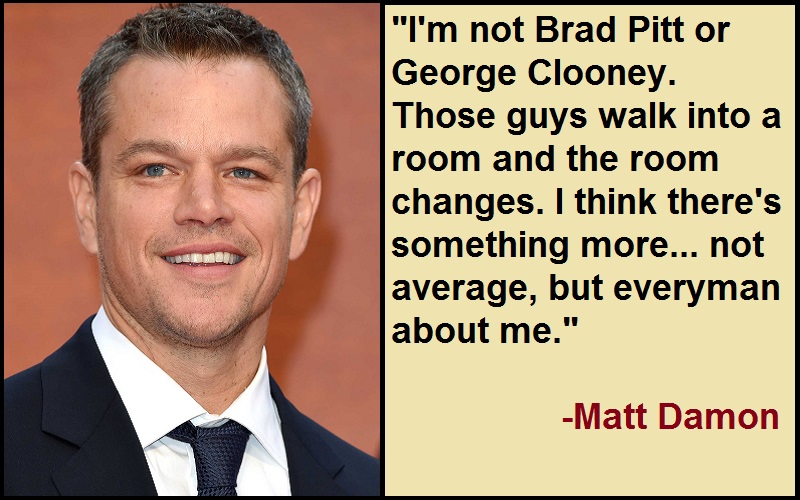 “I believe a solid, really strong middle-class is the key to making the country in the best way.”-Matt Damon

“My wife is my soul mate. I can’t imagine being without her.”-Matt Damon

“If anybody wanted to photograph my life, they’d get bored in a day.”-Matt Damon

“Eventually, stardom is going to go away from me. It goes away from everybody and all you have in the end is to be able to look back and like the choices you made.”-Matt Damon

“It’s better to be a fake somebody than a real nobody.”-Matt Damon

“I’ve been left alone, even by the paparazzi, because what sells is sex and scandal. Absent that, they really don’t have much interest in you. I’m still married, still working, still happy.”-Matt Damon

“Bond is part of the system. He’s an imperialist and a misogynist, and he laughs at killing people, and he sits there slugging martinis. It’ll never be the same thing as this because Bourne is a guy who is against the establishment, who is paranoid and on the run. I just think fundamentally they’re just very different things.”-Matt Damon

“Still, the change is nearly indescribable – going from total obscurity to walking down a street in New York and having everybody turn and look; to feel the temperature of a room change when I walked in.”-Matt Damon

“If anybody wanted to photograph my life, they’d get bored in a day. ‘Heres Matt at home learning his lines. Here’s Matt researching in aisle six of his local library’. A few hours of that and they’d go home.”-Matt Damon

“For Ripley, I learned to play some songs on the piano, and I never really played them again.”-Matt Damon

“I fell in love with a civilian. Not an actress and not a famous actress at that. Because then the attention doesn’t double – it grows exponentially. Because then suddenly everybody wants to be in your bedroom. But I don’t really give them anything.”-Matt Damon

“Success is not something I’ve wrapped my brain around. If people go to those movies, then yes, that’s true, big-time success. If not, it’s much ado about nothing.”-Matt Damon

“I never wanted to do the same kind of movies over and over anyway, so my theory on it all is I’m just gonna try and dodge the label and keep doing what I am doing.”-Matt Damon

“Right before ‘The Bourne Identity’ came out, I hadn’t been offered a movie in a year.”-Matt Damon

“Now I feel I have an unspoken deal with the paparazzi: ‘I won’t do anything publicly interesting if you agree not to follow me.”-Matt Damon

“I was never that much a focus of interest that I became a ‘thing’ at an earlier point in my career. I’m aware of having become a ‘thing’ now, which doesn’t give me a lot of pleasure.”-Matt Damon

“I honestly if I get a vacation I’m gonna go and sit on my couch in New York cause that’s the one place I haven’t been for a very long time.”-Matt Damon

“I found myself getting more publicly shy when the gala events and big crowds started. Some people embrace it. To me, it’s not worth enough to risk my private life being public.”-Matt Damon

“Now that I have kids, I’m probably more overprotective than I’ve ever been. My wife’s nickname for me is ‘red alert.’ I sometimes check just to see if the kids are breathing. But I try not to be a helicopter parent.”-Matt Damon

I’m always cautious about overstepping any boundaries. At the end of the day, it’s a director’s medium, and if they don’t want to hear from me I just step back.”-Matt Damon

“I love shooting when the character is interesting and the script is interesting, but the research beforehand is really fun. The whole process makes me anxious and restless, and I have trouble sleeping, just trying to figure out the character.”-Matt Damon

“As somebody who makes his living in the movie business and wants to contribute to it, I think that the best chance I have of doing that is just consistently working with great directors.”-Matt Damon