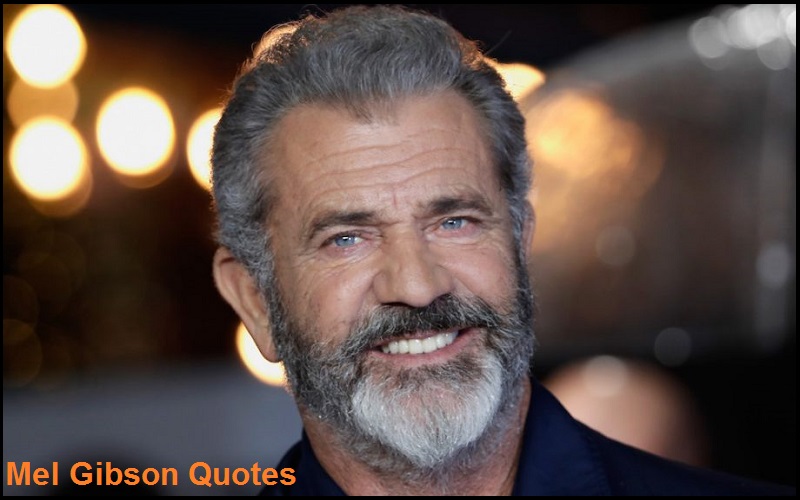 Mel Gibson Quotes:- Mel Gibson (born January 3, 1956) is an American actor and filmmaker. He is best known for his action hero roles, particularly his breakout role as Max Rockatansky in the first three films of the post-apocalyptic action series Mad Max and as Martin Riggs in the buddy cop film series Lethal Weapon.

“I am politically incorrect, that’s true. Political correctness to me is just intellectual terrorism. I find that really scary, and I won’t be intimidated into changing my mind. Everyone isn’t going to love you all the time.”-Mel Gibson 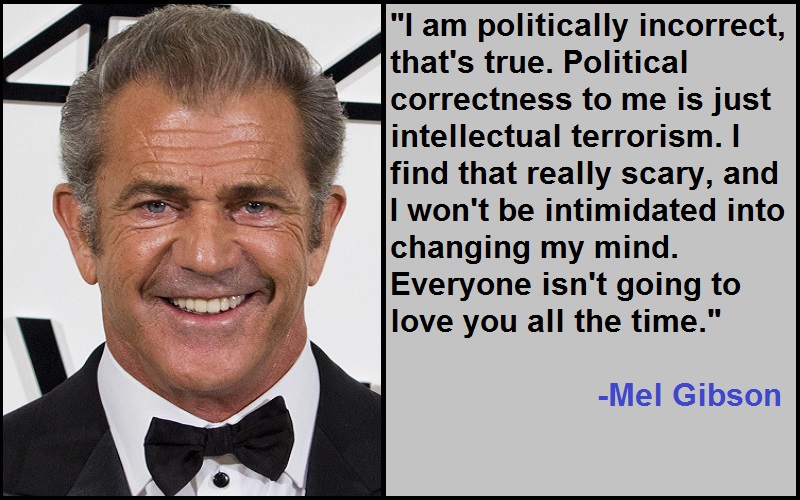 “My whole approach to wardrobe is, throw it in a suitcase and make sure they don’t press it, for Pete’s sake, so I can try to display some rumpled charm. Actually, I’m just a pig. I’ve got coffee stains on my pants. I think they’re coffee stains, anyway.”-Mel Gibson

“Hollywood is a factory. You have to realize that you are working in a factory and you’re part of the mechanism. If you break down, you’ll be replaced.”-Mel Gibson

“Boot Camp was great and very interesting. You got to use live rounds of ammunition and got to do a lot of crawling around with live rounds flying around you, so you really had to learn to keep your ass down – everything down for that matter.”-Mel Gibson

“I was spiritually bankrupt, and when that happens, it’s like spiritual cancer afflicts you.”-Mel Gibson

“Theatrical is fantastic. I don’t think anything will ever replace the big dark room, the screen, and the popcorn. You can kind of do it in your home if you have a nice screen, but it’s not the same thing.”-Mel Gibson

“It’s amazing how powerful a piece of work can be and how it can influence people and change. It’s pretty interesting.”-Mel Gibson

“Writing is a hard gig, and it’s hard to convey a lot. That’s why scripts tend to be a little bit overwritten.”-Mel Gibson

“The very first idea I ever had about making a film… my first thought about ever being a filmmaker was when I was sixteen years old and I wanted to make a Viking movie. And I wanted to make it in old Norse, which I was studying at the time. It’s odd because at that age that’s a stupidly ridiculous idea ’cause how will I ever be a filmmaker.”-Mel Gibson

“A woman should be home with the children, building that home and making sure there’s a secure family atmosphere.”-Mel Gibson

“It’s a wise man who understands that every day is a new beginning, because boy, how many mistakes do you make in a day? I don’t know about you, but I make plenty. You can’t turn the clock back, so you have to look ahead.”-Mel Gibson

“After about 20 years of marriage, I’m finally starting to scratch the surface of what women want. And I think the answer lies somewhere between conversation and chocolate.”-Mel Gibson

“I have learned that a bitter experience can make you stronger.”-Mel Gibson

“My biggest weakness is that I’m excessive. Fortunately for everyone concerned, I’m not as excessive as I used to be.”-Mel Gibson

“I’ll tell you what I did need to learn was tolerance, and I think I’ve been actually given a daily opportunity to practice that, and it’s – it’s – and I know that that sounds almost like a backhanded slap, and it is in a way because I haven’t been successful at it every day.”-Mel Gibson

“The thing we’re all looking for is happiness, and if we achieve just a modicum of that or even a little piece of serenity even for five minutes a day, we’re very lucky.”-Mel Gibson

“Acting feels different. I’m not sure exactly what that is, but it used to mean a lot more. Maybe that sounds like I’m throwing it away and I’m not, I’ll still do the best damn job I can, but it doesn’t mean the same thing. I’m going to get the answer for myself one of these days. It’s the male menopause, that’s what it is.”-Mel Gibson

“I got the acting bug back because I felt like all of a sudden maybe after all these years, maybe I might have something to offer again. I walked away from it after ‘Signs’ because I just felt I was a bit stale and it wasn’t ringing my bells, so I focused on directing, writing and producing.”-Mel Gibson

“Life is life, and one has experiences that are painful and some that are very pleasant, and one has reward and sacrifice and more reward and disappointment and joy and happiness, and it’s always going to be the same.”-Mel Gibson

“I have learned that a bitter experience can make you stronger. I now boastfully say that I have a hide like a rhinoceros… and I’m smiling. It’s an interesting thing.”-Mel Gibson

“Boy, there’s nothing more thrilling than a chase. I’d often thought, over the years, that someone should do a whole film where it’s nothing but a chase.”-Mel Gibson

“Marriage is marriage. Everybody has problems.”-Mel Gibson

“What I need to do to heal myself and to be assuring and allay the fears of others and to heal them if they had any heart wounds from something I may have said.”-Mel Gibson

“I think any kind of hiatus one takes in an artistic journey is going to make a huge difference. The pause will inform the choices that you make.”-Mel Gibson

“Change is always preceded by a little pain. Some people can change and they don’t have to go through so many painful things. But I think that I’m of a personality that I’m a little stubborn, so it’s tough for me.”-Mel Gibson

“People like scary stories. There’s a fascination with fear themes, and we want to face those things in a weird, subconscious way.”-Mel Gibson

“I think the ‘Lethal Weapon’ movies contain my favorite performances. It sounds really crummy, I know, but although the work doesn’t look hard, it’s difficult to create ‘effortless’ on screen.”-Mel Gibson

“I’m as vain as the next guy. I have a facade on right now. But you can’t see it, because it’s reality-based.”-Mel Gibson

“When you get to that point where you don’t want to live, and you don’t want to die, it’s a desperate, horrible place to be. And I just hit my knees. And I had to use ‘The Passion of the Christ’ to heal my wounds.”-Mel Gibson

“The Holy Ghost was working through me on this film, and I was just directing traffic.”-Mel Gibson

“I don’t think of myself as either American or Australian really, I’m a true hybrid. It’s a good thing for me because both of them are really good countries.”-Mel Gibson

“Well, if you look at the whole story, I mean there’s only Jews and Romans in the story. I mean I just wanted to flesh that character out and make that a drama about the people around Christ when he was going through this passion.”-Mel Gibson

“Above all, the film is a business… Independence is a really cool thing is you can be a bit bolder, and take a few more chances with what you do.”-Mel Gibson

“Well, I think any time you delve into this sort of religion, politics, as you well know, you’re going to, you know, touch a few nerves. I wasn’t – now – and this is the honest truth.”-Mel Gibson

“Religion and politics hit nerves. There’s a lot of anger about a lot of things. It’s not easily resolved. I guess that’s what wars are about. Wars are about prejudice and fear. Hit first before you get hit. Believe me, I know.”-Mel Gibson

“There has to be some kind of order and some moral code. I don’t know how people can function without a belief in a deity.”-Mel Gibson

“I think digital will displace film, yes. We’re talking about digital as a thing of the future, but I’m afraid that it’s here.”-Mel Gibson

“Life’s experiences, whether they be pleasant or unpleasant, torturous or excruciatingly wonderful and blissful, you know, the season you somehow and you learn from them.”-Mel Gibson

“Film is built for kinetic movement and crash and burn. It’s a great tool for spectacles. But if it’s not rooted to something a little higher, you’re just kicking your butt around the corner. You can only take so much of that. You have to have some sort of foundation to explode from.”-Mel Gibson