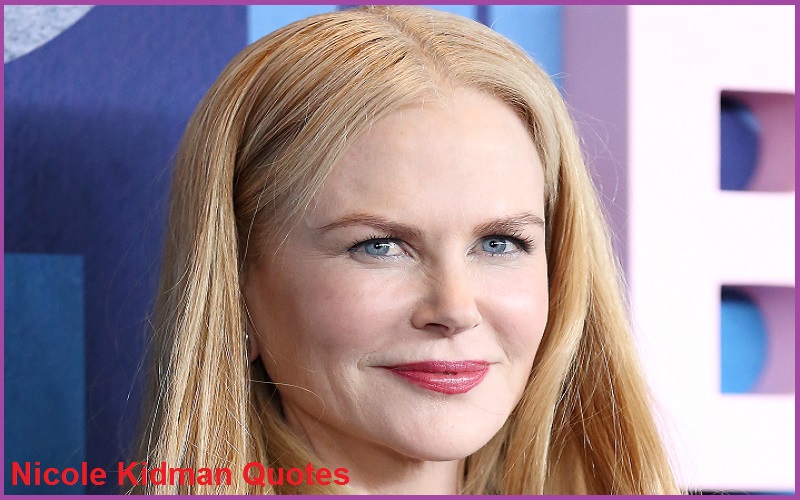 Nicole Kidman Quotes:- Nicole Kidman (born 20 June 1967) is an Australian-American actress and producer. She is the recipient of multiple awards, including an Academy Award, two Primetime Emmy Awards, and five Golden Globe Awards.

She was listed among the highest-paid actresses in the world in 2006 and in 2018, Time magazine named her one of the 100 most influential people in the world. Kidman began her acting career in Australia with the 1983 films Bush Christmas and BMX Bandits.

“I would describe myself as emotional and highly strung. If something upsets me, it really upsets me. If something makes me angry, I get really angry. But it’s all very upfront. I can’t hide it. I’m also loyal and I hope I’m fun.”-Nicole Kidman 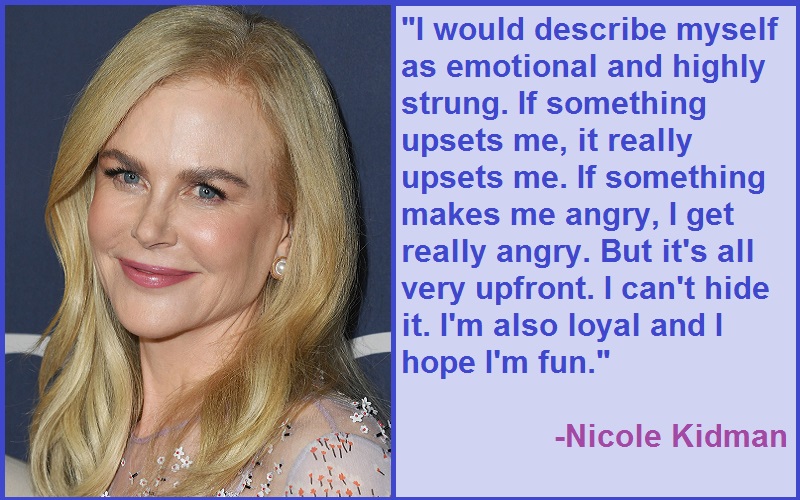 “I always wanted to get married with just candles! I think candlelight is the most beautiful light there is and there’s something very spiritual about it.”-Nicole Kidman

“Life has got all those twists and turns. You’ve got to hold on tight and off you go.”-Nicole Kidman

“I believe that as much as you take, you have to give back. It’s important not to focus on yourself too much.”-Nicole Kidman

“I love acting, but it’s much more fun taking the kids to the zoo.”-Nicole Kidman

“I find standing and posing for photos very awkward.”-Nicole Kidman

“That goes against what I believe morally. That’s adultery, and if I’m accused of that, no, that’s not right. I have two kids who see that and remember that and judge me. It didn’t happen, and it’s not to be reported that way.”-Nicole Kidman

“People can tell you what to do, but ultimately, we’re all going to die, so how do you want to live?”-Nicole Kidman

“I think when you’re in a relationship where you really care for the other person, when they achieve their dreams it’s better than when you do yourself.”-Nicole Kidman

“When you relinquish the desire to control your future, you can have more happiness.”-Nicole Kidman

“I think each role takes a little from you and circles around you for the rest of your life. I don’t think you ever abandon any of them.”-Nicole Kidman

“My life collapsed. People ran from me because suddenly it was ‘Oh my God! It’s over for her now!”-Nicole Kidman

“Cinema is a director’s medium, so you’re saying, ‘What do you want?’ Being an actor is about adapting – physically and emotionally. If that means you have to look great for it and they can make you look great, then thank you. And if you have to have everything washed away, then I’m willing to do that too.”-Nicole Kidman

“I never wore glasses except when I had to read a teleprompter at an awards show or drive, so I didn’t notice much. I could exist in my head. It was kind of my escape from the world and my protection.”-Nicole Kidman

“I have a little bit of a belly, a tiny bit of pooch. It’s the one thing I don’t want to lose. I just like having some softness. If I lose that, then Tom might leave me.”-Nicole Kidman