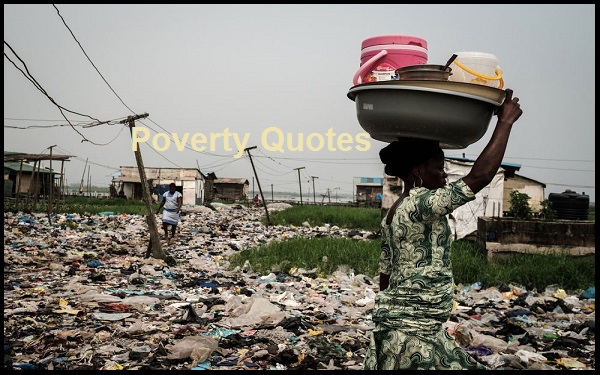 Poverty Quotes:- Poverty is not having enough material possessions or income for a person’s needs. Poverty may include social, economic, and political elements.

Absolute poverty is the complete lack of the means necessary to meet basic personal needs, such as food, clothing, and shelter. The threshold at which absolute poverty is defined is always about the same, independent of the person’s permanent location or era.

“Poverty is not a disgrace, but it’s terribly inconvenient.”-Milton Berle 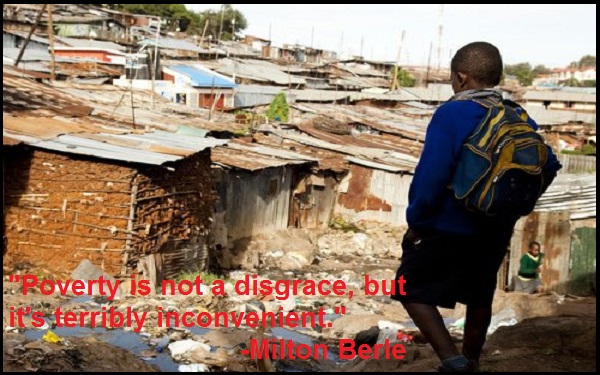 “As long as poverty, injustice and gross inequality persist in our world, none of us can truly rest.”-Nelson Mandela

“The real tragedy of the poor is the poverty of their aspirations.”-Adam Smith

“He is now rising from affluence to poverty.”-Mark Twain

“As you simplify your life, the laws of the universe will be simpler; solitude will not be solitude, poverty will not be poverty, nor weakness weakness.”-Henry David Thoreau

“Focusing your life solely on making a buck shows a certain poverty of ambition. It asks too little of yourself. Because it’s only when you hitch your wagon to something larger than yourself that you realize your true potential.”-Barack Obama

“We need to steer clear of this poverty of ambition, where people want to drive fancy cars and wear nice clothes and live in nice apartments but don’t want to work hard to accomplish these things. Everyone should try to realize their full potential.”-Barack Obama

“Poverty is the worst form of violence.”-Mahatma Gandhi

“Poverty is the mother of crime.”-Marcus Aurelius

“The problems we face now – poverty and violence at home, war and destruction abroad – will last only as long as we continue relying on the same politicians who created them in the first place.”-Donald Trump

“The community which has neither poverty nor riches will always have the noblest principles.”-Plato

“You are going to let the fear of poverty govern your life and your reward will be that you will eat, but you will not live.”-George Bernard Shaw

“Poverty is a veil that obscures the face of greatness. An appeal is a mask covering the face of tribulation.”-Khalil Gibran

“I worked my way up from nothing to a state of extreme poverty.”-Groucho Marx

“The common argument that crime is caused by poverty is a kind of slander on the poor.”-H. L. Mencken

“I grew up with the sea, and poverty for me was sumptuous; then I lost the sea and found all luxuries gray and poverty unbearable.”-Albert Camus

“Science can lift people out of poverty and cure disease. That, in turn, will reduce civil unrest.”-Stephen Hawking

“Love conquers all things except poverty and toothache.”-Mae West

“Yes, we’ve still got more work to do. More work to do for every American still in need of a good job or a raise paid leave or a decent retirement; for every child who needs a sturdier ladder out of poverty or a world-class education; for everyone who has not yet felt the progress of these past seven and a half years.”-Barack Obama

“I grew up in an era of pretty severe poverty. My parents weathered the Great Depression, and money was always a very big concern. I was weaned on a shortage mentality and placed in foster homes largely because there simply wasn’t enough money to take care of the most basic of needs.”-Wayne Dyer

“Our life of poverty is as necessary as the work itself. Only in heaven will we see how much we owe to the poor for helping us to love God better because of them.”-Mother Teresa

“There are many people in South Africa who are rich and who can share those riches with those not so fortunate who have not been able to conquer poverty.”-Nelson Mandela

“To say that any people are not fit for freedom is to make poverty their choice, and to say they had rather be loaded with taxes than not.”-Thomas Paine

“Poverty entails fear and stress and sometimes depression. It meets a thousand petty humiliations and hardships. Climbing out of poverty by your own efforts is something on which to pride yourself but poverty itself is romanticized by fools.”-J. K. Rowling

“Poverty wants some, luxury many, and avarice all things.”-Lucius Annaeus Seneca

“He who has made a fair compact with poverty is rich.”-Lucius Annaeus Seneca

“Grant me the treasure of sublime poverty: permit the distinctive sign of our order to be that it does not possess anything of its own beneath the sun, for the glory of your name, and that it has no other patrimony than begging.”-Francis of Assisi

“Holy poverty confounds cupidity and avarice and the cares of this world.”-Francis of Assisi