One of India’s highest-paid and most popular celebrities, Chopra has received numerous awards, including a National Film Award and five Filmfare Awards.

In 2016, the Government of India honored her with the Padma Shri, and Time named her one of the 100 most influential people in the world. In 2017 and 2018, Forbes listed her among the World’s 100 Most Powerful Women.

“When I became Miss World, I couldn’t believe I had won it. I used to sleep with my crown because I was scared someone would steal it. In a minute, the world changed for me.”-Priyanka Chopra 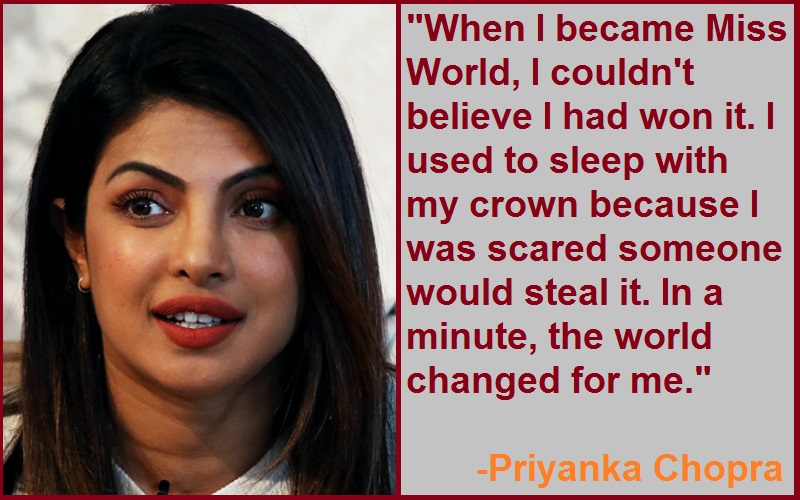 “Black, brown, white, yellow – why are we always talking about colors? I’m a girl. I believe in a global community.”-Priyanka Chopra

“My favorite memory about ‘Baywatch’ is the music. That was my favorite part. It was, like, my calling. And to watch everyone run in slow motion.”-Priyanka Chopra

“I am a very private person. No one ever knows anything about me as I don’t think it is necessary. I tell people as much as I want them to know about me.”-Priyanka Chopra 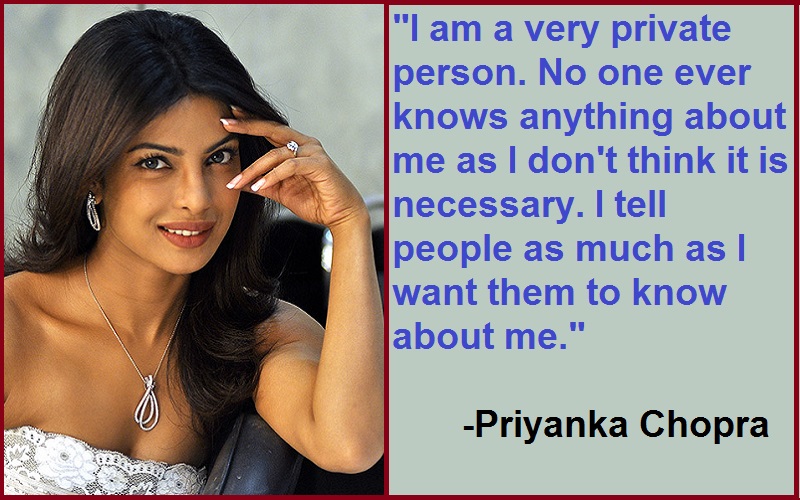 “You can be an absolute woman and also be smart and tough and not lose your femininity.”-Priyanka Chopra

“Financial independence is paramount. My mom always says that when a woman is financially independent, she has the ability to live life on her own terms. I think that was the soundest advice that I ever got. No matter where you go in life or who you get married to, you have to be financially independent – whether you use it or not.”-Priyanka Chopra

“My father is conservative but has always supported my decisions. He lets me make my own decisions. His only condition while allowing me to come to Mumbai was that my mother must accompany me.”-Priyanka Chopra

“When there is a ring on my finger, which is actually given to me, then I’ll tell the world. Till then, no one can claim me.”-Priyanka Chopra

“I think it’s great to be flawed. I am hugely flawed, and I like it this way. That’s the fun of life. You fall, get up, make mistakes, learn from them, be human and be you.”-Priyanka Chopra

“Don’t try to squeeze into a glass slipper. Instead, shatter the glass ceiling.”-Priyanka Chopra

“It’s a terrible thing to say, and I probably shouldn’t say it, but I’m a lazy person when it comes to physical exertion. I don’t like gyms unless I need to for a movie or a part of a show.”-Priyanka Chopra

“The acceptance of ‘Quantico’ so far has been really great. At the moment, I’m just straddling two continents far away from each other, with very active careers in both!”-Priyanka Chopra

“When I was 13, I would come to visit my aunt and uncle in New York. I decided I wanted to live with them after seeing my cousin’s school. Honestly, I just wanted to go to a school where I didn’t have to wear uniforms, and my mom said okay.”-Priyanka Chopra

“I believe in myself and my art so much. I’ve always trusted destiny. Wherever it takes me, I just work damn hard at the opportunity.”-Priyanka Chopra

“I taught myself confidence. When I’d walk into a room and feel scared to death, I’d tell myself, ‘I’m not afraid of anybody.’ And people believed me. You’ve got to teach yourself to take over the world.”-Priyanka Chopra

“It is in my nature to give the work I have all the discipline and due diligence that I am capable of.”-Priyanka Chopra

“Guess girls are normally blonde, blue-eyed bombshells. It was nice to be a brunette one.”-Priyanka Chopra

“In features, we’re languid: we shoot one or two scenes over, like, three days. In TV, the pace is so different. You’re shooting ten scenes a day, going way into the future or way back into the past. It’s complete madness, and I’m just trying to keep up with this really electric pace.”-Priyanka Chopra

“As a girl, I am this stupid, emotional, very loyal, sort of believe-in-values-and-principals sort of girl.”-Priyanka Chopra

“I’ve been used to being my own boss for a really long time, so I don’t take to authority very well.”-Priyanka Chopra

“In India, people love turmeric. They make turmeric milk, and sometimes I mix it with some cream or yogurt and turn it into a scrub. You’d be amazed at what it can take off your skin.”-Priyanka Chopra

“I hate the term ‘Bollywood,’ because we’re not a ‘me too’ of Hollywood. The Indian film industry is prolific.”-Priyanka Chopra

I have never had a plan when it comes to my career: America came to me with an opportunity.”-Priyanka Chopra

“I live with romance in my brain. I’m a true-blue Cancerian like that.”-Priyanka Chopra

“As an entertainer, I try to do projects that reflect a woman having the ability to stand up for herself.”-Priyanka Chopra