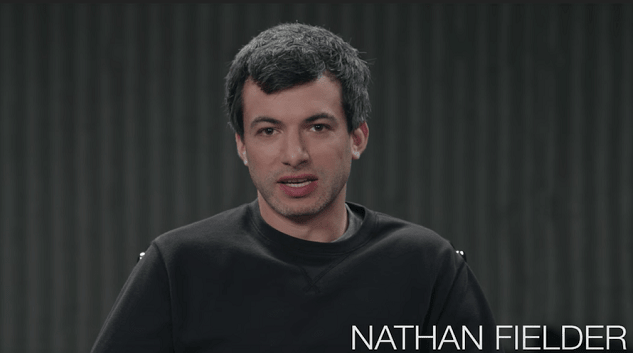 Nathan Fielder Quotes:- Nathan Joseph Fielder is a Canadian writer and comedian. He is best known for creating and starring in the Comedy Central show Nathan for You. Fielder was born on May 12, 1983. in Vancouver, British Columbia, to a Jewish family. His parents, Eric and Deb, were social workers. Fielder worked as a magician during his teenage years and is a member of The Magic Castle in Los Angeles, California. He attended Point Grey Secondary School, where he was a member of the school’s improv comedy group, which also included comedian Seth Rogen.


Fielder studied business at the University of Victoria, where he graduated with a Bachelor of Commerce in 2005. After university, Fielder moved to Toronto and enrolled in a comedy program at Humber College in 2006. After receiving the Tim Sims Encouragement Fund Award in 2006, Fielder worked as a writer on Canadian Idol, where he was noticed by Michael Donovan, an executive producer for the CBC comedy series This Hour Has 22 Minutes.

“A lot of the time, people think I’m really dumb or really uncomfortable talking to them, which is kind of a real thing.”-Nathan Fielder

“Dramas make me laugh. The other day, I saw ‘The Place Beyond the Pines,’ and I was giggling the whole time. I laugh when I’m uncomfortable.”-Nathan Fielder

“I auditioned for ‘The Office,’ and I don’t know if it was a role I could do, but I liked the character. You do one take, and you’re reading with a person who’s just sitting in a chair and not really… you’re not playing off someone, which is what I like to do. I like to play around and find the moment.”-Nathan Fielder

“I don’t like getting people upset, so that’s not my goal. But I like putting people in situations where how they respond says a lot about them.”-Nathan Fielder

“I have a business background. I have always wanted to open my own business.”-Nathan Fielder

Best Favorite Nathan Quotes For You

“I just don’t have this magnetic personality that everyone is drawn to. I don’t make friends easily… I’m just not one of those people.”-Nathan Fielder


“I used to trade stocks online, and I kind of felt gross, like, all I’m doing is making money off other people’s creativity, and I’m not creating anything myself.”-Nathan Fielder

“If I find something funny and make an older woman laugh, I love that for some reason.”-Nathan Fielder

“I’m not into things that feel like a sequel. There’s just something magical about when something happens for the first time.”-Nathan Fielder

“I’m very bad at ending sentences. A lot of times I just want to say, ‘That’s the end of my sentence. I have nothing more to say.”-Nathan Fielder

“In life, a lot of great ideas sound insane or absurd at first.”-Nathan Fielder

“It’s much funnier when the comedy can happen with me just trying my best to genuinely do a good thing.”-Nathan Fielder

“It’s weird. I don’t really have goals. I just try to make sure I’m enjoying what I’m doing. Once I start to get sick of it, the next thing becomes obvious.”-Nathan Fielder

“Once in a while, I do these things that would make the 10-year old version of my laugh. I don’t know why. You’ve got to do something a little bit immature. I’m surprised at how often those are my best ideas.”-Nathan Fielder

“Social interactions have always been a bit of a difficult thing for me. I think I have a natural tendency to make people not 100 percent super comfortable.”-Nathan Fielder

“The type of thing that one person would get mad at, another person would laugh at, is a good kind of zone to be in.”-Nathan Fielder