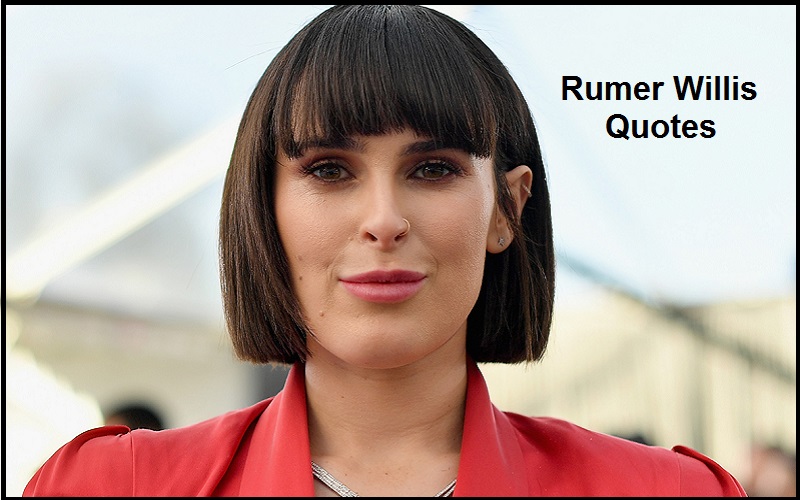 Rumer Willis Quotes:- Rumer Willis (born August 16, 1988) is an American actress and singer. She is the eldest daughter of actors Bruce Willis and Demi Moore.

Willis won season 20 of Dancing with the Stars. She went on to make her Broadway debut in Chicago as Roxie Hart on September 21, 2015. She had a recurring role in the third season and then became a series regular in the fourth season of the FOX musical-drama Empire.

“Love is the only unifier in the world. We’ve all felt exactly the same way. It’ll make you crazy, and it’ll make you ecstatic, and that’s true for everyone.”-Rumer Willis 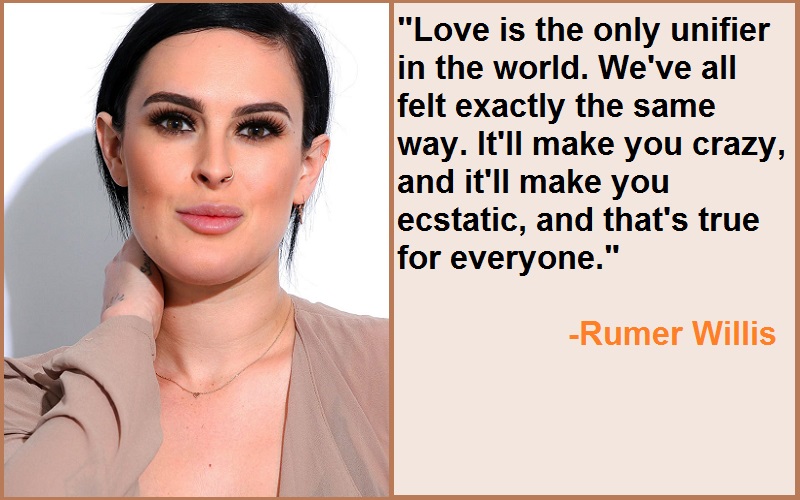 “The deepest gift you can learn in life is about self-love, and that’s not going to happen overnight.”–Rumer Willis

“Everybody is going to have an opinion on you; not everyone is going to like you. You can’t live your life based on other people’s opinions of you or let that change what you do or how you feel about yourself, because then you’re not living.”-Rumer Willis

“I would never want the responsibility of being the prettiest girl on screen; it’s too much.”-Rumer Willis

“You can’t become what you aren’t, or you will start feeling awful about yourself.”-Rumer Willis

“For a while, I thought about studying medicine at school and becoming a doctor because I’ve always been interested in psychology and how people’s minds operate. But I’m able to explore some of that as an actor and ultimately I think it seems more interesting.”-Rumer Willis

“Being stick skinny to the extent where you can see your bones through your skin is not a good look. You don’t need to be that to be beautiful or to be perfect or to fit in. Who you are is exactly who you should be. You can’t let other people dictate your life or how you feel about yourself because then you’re not living.”-Rumer Willis

“Education is very important to my parents and to me.”-Rumer Willis

“Everyone has opportunities and different doors that are opened to them in different ways. In the end, if you’re talented you’ll get work if you’re not, you won’t, so it doesn’t really matter who you know.”-Rumer Willis

“My parents always knew that I wanted to act, so it didn’t really come as a big surprise. The only thing they told me was that I had to wait until I was 18 so I could get my education out of the way first.”-Rumer Willis

“I’ve never wanted to just ride on coattails. I don’t know, if you don’t earn something then it doesn’t feel as good.”-Rumer Willis

“Just in general, no matter what you’re doing, be true to yourself. Never let anyone else dictate how you live your life.”-Rumer Willis

“As you get older, you realize your parents aren’t these superheroes. They’re actually people.”-Rumer Willis

“I think if you have any fear or shame, it’s really hard to want to express yourself.”-Rumer Willis

“Look, nobody is ever exactly the same as anybody else. You’re handed the cards you are for a particular reason, so you follow that path and see where it takes you.”-Rumer Willis

“Fear is such a huge thing that holds us back.”-Rumer Willis

“I have been very, very blessed with not having stage parents.”-Rumer Willis

“When I was growing up, I had a nanny who would always play ‘The Sound of Music’ and ‘Bye Bye Birdie,’ so I was always listening to that stuff.”-Rumer Willis

“My mom had me when she was 25, and I’m 28 now, and just to even imagine myself three years ago starting to have children and be married and have my career, it’s pretty trippy, and I’m so proud and kind of in awe of her.”-Rumer Willis

“If I could find the perfect career of doing television and movies where I could sing, that would be great.”-Rumer Willis

“My dad says I was an extra in ‘Die Hard.’ I think it’s true.”-Rumer Willis

“My sisters are my best friends and such incredible women.”-Rumer Willis

“Totally, if I wasn’t trying to be an actor, I would leave L.A. because you can’t really have that life here. There’s a lot of baggage that comes with being here, like the paparazzi, traffic, and all of it.”-Rumer Willis

“People have such an immediate judgment of me because I have tattoos or because my hair is sometimes crazy.”-Rumer Willis

“In high school, I had a much easier time interacting with adults than with my peers.”-Rumer Willis

“I’m all for equality.”-Rumer Willis

“When you grow up with parents that are known worldwide and having so much attention from media and all of the tabloid magazines, it’s really tough.”-Rumer Willis

“The only place you can really find the confidence and the love for yourself is within you, so that has to be what carries you: not all of these external things.”-Rumer Willis

“I just found such a love for dancing. If anybody would love to just feel great, not just physically, but you want to feel such confidence, just go and take a ballroom dancing class! I love it more than any kind of workout.”-Rumer Willis

“People would say I looked like a man or something called a ‘buttaface’, which means everything good but her face, or ‘potato head’ was the big term that everyone used a lot, basically making fun of the way I looked.”-Rumer Willis

“I have an inner drag queen. Or rather, I feel like I was a drag queen in a past life.”-Rumer Willis