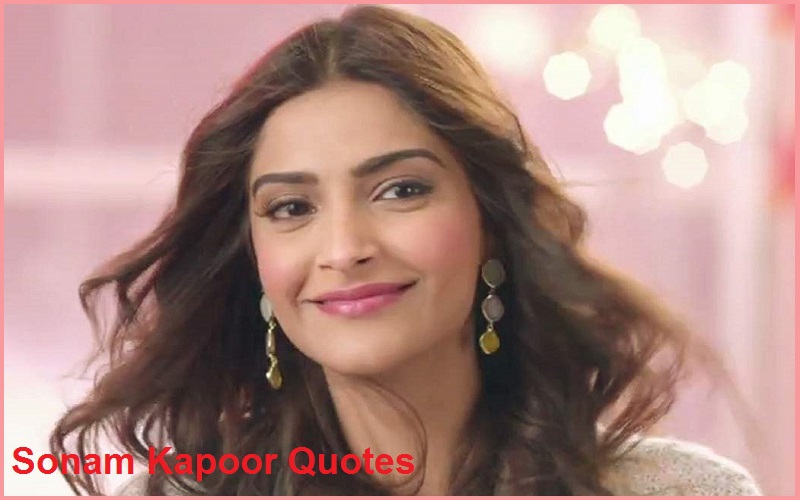 Sonam Kapoor Quotes:- Sonam Kapoor (born 9 June 1985) is an Indian actress who appears in Bollywood films. Kapoor is one of the highest-paid actresses in the industry and is the recipient of several awards, including a Filmfare and a National Film Award.

The daughter of actor Anil Kapoor, Kapoor studied theatre and arts at the United World College of South East Asia in Singapore. She was an assistant director to Sanjay Leela Bhansali on the 2005 film Black.

“In my personal life, I have always been bold, from the clothes I wear to how I talk. For me, boldness does not necessarily mean stripping. I think people have the wrong notion about boldness. For me, bold is being different.”-Sonam Kapoor 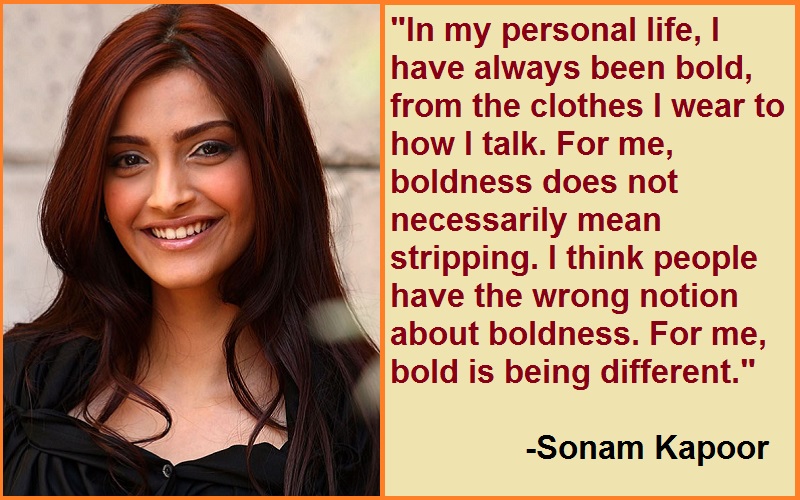 “I think every single imperfection adds to your beauty. I’d rather be imperfect than perfect.”-Sonam Kapoor

“No relationship works without making an effort. That goes without saying. But you should never overcompensate.”-Sonam Kapoor

“I have an unending shoe closet. In fact, I don’t even know how many shoes I have.”-Sonam Kapoor

“I am naive when it comes to love, you know what I mean? I do believe in falling in love at first sight and things like that.”-Sonam Kapoor

“I have eclectic taste, and I love vintage style mixed with glamour and old-world charm.”-Sonam Kapoor

“I had lost my way for some time, so I need to do things that I am happy with. It’s not about being the number one heroine or money. It’s about doing roles that I enjoy. My biggest ambition is happiness.”-Sonam Kapoor

“Opposites generally create intense chemistry. There are more chances of fireworks when different people are together than similar personalities.”-Sonam Kapoor

“I’m honest. If someone asks about my weight loss, I tell them I have five people working on me, plus there’s Photoshop. I tell them I can’t eat everything and look good. I was unhealthy when I was fat, and now I’m a normal body type. I’m not special; I’m just an actress, and boys and girls are intelligent enough to recognize that.”-Sonam Kapoor

“Indian women love to dress up like princesses. In India, people still go to the market to buy fabrics, garments are made-to-order, and friends come with you to the fittings.”-Sonam Kapoor

“For me, a holiday is about taking a book and going to a mountain and reading.”-Sonam Kapoor

“I’ve realized I have to be very careful in what I say. I speak my heart out. Such honesty is not appreciated in the film industry. Instead, it is twisted and distorted. A lot of what I say is lost in translation.”-Sonam Kapoor

“Being in love is the best feeling on the planet. I really believe that love makes the world go round.”-Sonam Kapoor

“Style is an expression of your individuality. Who you are and what your mood is, is what you wear.”-Sonam Kapoor

“I could never fall in love just for money. I like my co-stars, and they are a bunch of good-looking men. But I’ve dated an actor. My dream man has to be a lot more than just good looking and rich!”-Sonam Kapoor

“I always believe that it’s better to be idealistic in love than be that cynic. That’s the only way to survive a relationship.”-Sonam Kapoor

“Indian junk food is my sin, even though I pretend to like Japanese.”-Sonam Kapoor

“I am trying to be a girl who is real and has an opinion. Might say stupid things but not scared of men, and for me that’s important.”-Sonam Kapoor

“Thanks to my father, I didn’t have to face the tough side of life. Probably that’s why I always chose love over money.”-Sonam Kapoor

“I always admired the beautiful stars of Hollywood and dreamt of becoming one of them.”-Sonam Kapoor

“I’ve always acted; in fact, I can’t remember a time when I was not. When I was little, the cinema was a game, then my father’s job and now mine.”-Sonam Kapoor

“I don’t like men who treat women like arm candies. He should treat me like an equal or better. And then he should be a good human being. He should see the human side of things. I like men who stand up for what’s right and who don’t cheat.”-Sonam Kapoor

“I love Italian fashion – the sense of style that Italians have as part of their DNA. Nobody is like them.”-Sonam Kapoor

“My mom would always read a book to me at night from when I was three. Now, I can’t go to sleep without reading a book. At the same time, once I read, it’s difficult for me to go to sleep, as I have an overactive imagination and I start thinking.”-Sonam Kapoor

“You marry out of the free will. If I marry, it will be from a personal choice, not some social compulsion or norm.”-Sonam Kapoor

“I like wearing beautiful clothes, but that does not translate into my work. People don’t like to see me as a glam doll in my movies. My audience and the media love me with two different perceptions. It’s a strange, crazy situation.”-Sonam Kapoor

“I love eating. Unfortunately, I have to be really determined and control my foodie temptations. That is the only thing I don’t like about being an actress; the constant need to check my weight. Otherwise, I love my job!”-Sonam Kapoor