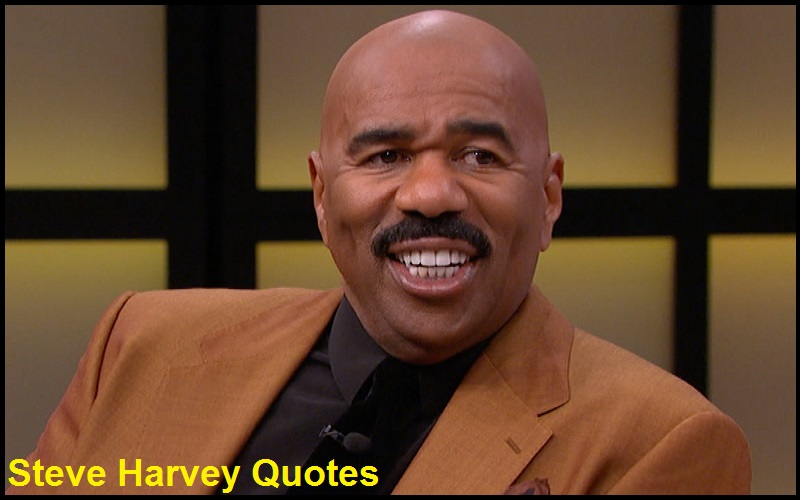 “You can be happy, or you can be right. If you want to be part of a couple and win every argument, you’re in trouble.”-Steve Harvey 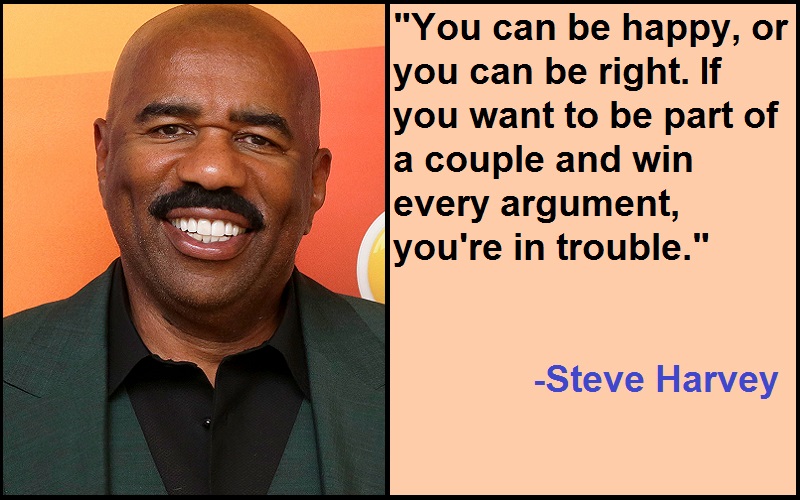 “I’m going to take this God-given gift of being funny, and I’m going to spread it out like peanut butter on everything I do.”-Steve Harvey

“You can’t go forward and backward at the same time.”-Steve Harvey

“There has been nothing more impactful on my life and meaningful to me than the introduction of Christ. That, hands down, blows away every joke I’ve ever written.”-Steve Harvey

“If a man loves you… he’s willing to profess it. He’ll give you a title after a while. You’re going to be his lady, his woman, his fiancee, his wife, his baby’s mama, something.”-Steve Harvey

“God lets you be successful because he trusts you that you will do the right thing with it. Now, does he get disappointed often? All the time, because people get there and they forget how they got it.”-Steve Harvey

“All men can and will change. But there’s only one woman we’re going to change for.”-Steve Harvey

“I don’t have ‘The Jerry Springer Show’. I just got ‘Family Feud’, but some of the families, when they lose, man, they have some real conversations with each other back behind that wall, but I’ve never been involved in any of them.”-Steve Harvey

“All I knew growing up was that my father was married to and loved my momma, period. He worked hard, made some money, and put it on the dresser. She spent it on the family, and he went out and earned some more. He taught me the most about love.”-Steve Harvey

“I pay attention to every minute of the day.”-Steve Harvey

“Women are the real reason we get up every day. I’m talking about real men. If there were no women, I would not even have to bathe, because why would I care? These are guys I’m hanging with. I wake up for a woman every day of my life to make it happen for her.”-Steve Harvey

“The problem is, women have stopped setting the bar high.”-Steve Harvey

“I sit my three sons down and say, ‘Listen to me. When the police stop you, immediately comply. Don’t walk away, don’t smart-mouth; get your hands up and get down on the ground.’ If you’re not black, you might not have to have that conversation, but I go over and over it with them because I don’t want that phone call.”-Steve Harvey

“When you’re happy at home, you can make a lot of things happen.”-Steve Harvey

“I’m not a relationship expert. I’m an expert on manhood.”-Steve Harvey

“God has positioned me just this way to be just like I am, to say what I say how I say it.”-Steve Harvey

“I have seen some crazy people do some crazy things on my variety show. I have to stop and ask them a lot of the time, just how they figured out that they could do the things that they do, some of it is just plain freaky.”-Steve Harvey

“I know how men think when they’re not responding to questions in a clinical study.”-Steve Harvey

“My mother raised me in the church. I was not allowed to stay home on Sunday; there was no option. I sang in the choir all the way up until I went to college.”-Steve Harvey

“My calling is to help people, to teach people, to share with people until I die. I can never stop doing that. I can’t, and I don’t want to.”-Steve Harvey

“I never say ‘nagging.’ I think that ‘nagging’ is a term that men created to get women to pipe down some. But, it’s a trap that we’ve created. We created several terms for women to back you down. Nagging means to stop asking me questions, then we get away with more. I think it’s a term men created.”-Steve Harvey

“You’ve got to quit lowering your standards. Set your requirements up front so when a guy hooks you, he has to know this is business.”-Steve Harvey

“The first time I saw my wife, Marjorie, I was doing stand-up in Memphis, and she was sitting in the front row. Afterward, I walked up and said, ‘Ma’am, I’m going to marry you one day.’ And 15 years later, I did.”-Steve Harvey

“My marriage to Marjorie is the most rewarding thing that ever happened to me. She gave me a life and a relationship that I didn’t know existed.”-Steve Harvey

“I’m not a good mother at all.”-Steve Harvey

“I just believe if you don’t believe in God, then where is your moral barometer? That’s just me talking. You can believe what you want to believe.”-Steve Harvey

“You can take lessons to become almost anything: flying lessons, piano lessons, skydiving lessons, acting lessons, race car driving lessons, singing lessons. But there’s no class for comedy. You have to be born with it. God has to give you this gift.”-Steve Harvey

“How can smart women be so stupid about men sometimes? Lack of knowledge. It’s what men have kept secret for so long.”-Steve Harvey

“The Lord saved my soul.”-Steve Harvey

“We all think that this relationship thing is a game out there. All I’m saying to women is, ‘Okay. If it’s a game, here are the rules that we play by.'”-Steve Harvey

“I’m just a living witness that you can be an imperfect soldier and still be in the army fighting for God Almighty. Don’t you think you got to be perfect ’cause I ain’t?”-Steve Harvey

“Comedians walk out, get a feel for the crowd. If it’s not going good, we change directions. If we got to drag your momma into this thing, we will. Whatever we got to do.”-Steve Harvey

“My mother was a Sunday school teacher. So I am a byproduct of prayer. My mom just kept on praying for her son.”-Steve Harvey

“I ain’t no author, man… my writing skills are not of ‘New York Times’ best-seller quality, trust and believe it ain’t. My vocabulary ain’t.”-Steve Harvey

“People see me laughing and telling jokes, but they had no idea after the show was over, I had no joy in my life, in my heart.”-Steve Harvey

“Other than my foundation – mentoring programs – everything I do is for money.”-Steve Harvey

“My father instilled in me to take care of my family. Show up even when you don’t want to show up.”-Steve Harvey

“God has given me a life far beyond anything I ever dreamed about. God is, man, God is something else man.”-Steve Harvey

“Hollywood is run by people who sit up in their executive office, who are not connected to Mississippi, Alabama, Chicago, South Carolina. They know nothing about that, they don’t go to church, and they make their decisions about what they think is right.”-Steve Harvey

“If you cook something on the show, and I don’t like it, I’m going to tell you. I don’t understand how you could watch any of these morning shows, and everything everybody cooks is absolutely delicious. Are you kidding me, man?”-Steve Harvey

“Being on a comedy tour is like traveling with family, everyone is all having a great time… then all of a sudden it turns sour. One thing gets said out of turn, and everyone is on everyone’s last nerve. After an hour of silence, we all start laughing about it.”-Steve Harvey

“You’ve got to be vulnerable when you’re talking to kids. There’s nothing worse than some adult standing up there just talking down to some kid. You can’t work that way.”-Steve Harvey

“As always, whenever I’m contacted by the White House, I’m just humbled.”-Steve Harvey

“I’m not really a relationship expert but… I’m an expert on manhood and what men think.”-Steve Harvey

“There’s a lot more to me than just funny.”-Steve Harvey

“I don’t have much of an attention span for TV – I nod off during the basketball playoffs – but when I watch ‘Game of Thrones’ on On Demand, I’m glued to the set. It’s mystical and addictive. Tyrion Lannister, that’s my man.”-Steve Harvey

“Every day, President Obama sends a beautiful message about how we should treat our women based on how he treats his wife. When people went after his wife during the campaign, he took a stand.”-Steve Harvey

“I tell my boys not to play rough with their younger sister. I try to teach them what I know already: You’re never going to win an argument with a girl, so just let her have what she wants!”-Steve Harvey

“Hip-hop is a beautiful thing. I think that the music genre itself has created more millionaires than any other music genre before it, especially in our community.”-Steve Harvey

“I think that we, as the African-American men in hip-hop, have a greater responsibility because we have the ears of so many millions of our young people. And they listenin’.”-Steve Harvey