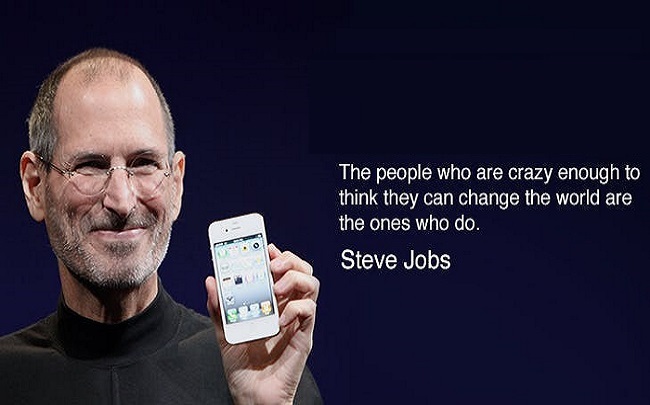 Steve Jobs Quotes:- Steve Jobs is the authorized self-titled biography book of Steve Jobs. The book was written at the request of Jobs by Walter Isaacson, a former executive at CNN and TIME who has written best-selling biographies of Benjamin Franklin and Albert Einstein.

Based on more than forty interviews with Jobs conducted over two years—in addition to interviews with more than one hundred family members, friends, adversaries, competitors, and colleagues—Isaacson was given “unprecedented” access to Jobs’s life.

Jobs is said to have encouraged the people interviewed to speak honestly. Although Jobs cooperated with the book, he asked for no control over its content other than the book’s cover and waived the right to read it before it was published.

“A lot of companies have chosen to downsize, and maybe that was the right thing for them. We chose a different path. Our belief was that if we kept putting great products in front of customers, they would continue to open their wallets.”-Steve Jobs

“Everyone here has the sense that right now is one of those moments when we are influencing the future.”-Steve Jobs 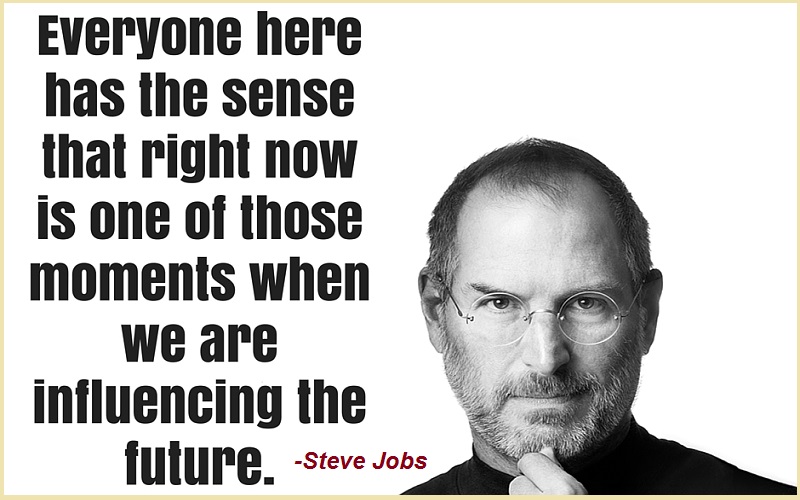 “An iPod, a phone, an internet mobile communicator… these are NOT three separate devices! And we are calling it iPhone! Today Apple is going to reinvent the phone. And here it is.”-Steve Jobs

“And no, we don’t know where it will lead. We just know there’s something much bigger than any of us here.”-Steve Jobs

“And one more thing.”-Steve Jobs

“Apple took the edge off the word ‘computer.”-Steve Jobs

“Apple’s market share is bigger than BMW’s or Mercedes’s or Porsche’s in the automotive market. What’s wrong with being BMW or Mercedes?”-Steve Jobs

“Be a yardstick of quality. Some people aren’t used to an environment where excellence is expected.”-Steve Jobs

“Being the richest man in the cemetery doesn’t matter to me. Going to bed at night saying we’ve done something wonderful, that’s what matters to me.”-Steve Jobs

“But innovation comes from people meeting up in the hallways or calling each other at 10:30 at night with a new idea, or because they realized something that shoots holes in how we’ve been thinking about a problem.”-Steve Jobs

“Computers themselves, and software yet to be developed will revolutionize the way we learn.”-Steve Jobs

“The design is a funny word. Some people think design means how it looks. But of course, if you dig deeper, it’s really how it works.”-Steve Jobs

“Each year has been so robust with problems and successes and learning experiences and human experiences that a year is a lifetime at Apple. So this has been ten lifetimes.”-Steve Jobs

“For you to sleep well at night, the aesthetic, the quality, has to be carried all the way through.”-Steve Jobs

“Great things in business are never done by one person. They’re done by a team of people.”-Steve Jobs

“I believe life is an intelligent thing: that things aren’t random.”-Steve Jobs

“I get asked a lot why Apple’s customers are so loyal. It’s not because they belong to the Church of Mac! That’s ridiculous.”-Steve Jobs

“I think we’re having fun. I think our customers really like our products. And we’re always trying to do better.”-Steve Jobs

“I want to put a ding in the universe.”-Steve Jobs

“If you’re gonna make connections which are innovative… you have to not have the same bag of experiences as everyone else does.”-Steve Jobs

“I’ll always stay connected with Apple. I hope that throughout my life I’ll sort of have the thread of my life and the thread of Apple weave in and out of each other, like a tapestry. There may be a few years when I’m not there, but I’ll always come back.”-Steve Jobs

“I’m an optimist in the sense that I believe humans are noble and honorable, and some of them are really smart. I have a very optimistic view of individuals.”-Steve Jobs

“I’m sorry, it’s true. Having children really changes your view on these things. We’re born, we live for a brief instant, and we die. It’s been happening for a long time. Technology is not changing it much – if at all.”-Steve Jobs

“I’m very excited about having the Internet in my den.”-Steve Jobs

“In most people’s vocabularies, design means veneer. It’s interior decorating. It’s the fabric of the curtains and the sofa. But to me, nothing could be further from the meaning of design.”-Steve Jobs

“Innovation distinguishes between a leader and a follower.”-Steve Jobs

“Innovation has nothing to do with how many R & D dollars you have. When Apple came up with the Mac, IBM was spending at least 100 times more on R & D. It’s not about money. It’s about the people you have, how you’re led, and how much you get it.”-Steve Jobs

“It is piracy, not overt online music stores, which is our main competitor.”-Steve Jobs

“It took us three years to build the NeXT computer. If we’d given customers what they said they wanted, we’d have built a computer they’d have been happy with a year after we spoke to them – not something they’d want now.”-Steve Jobs

“It’s not a faith in technology. It’s faith in people.”-Steve Jobs

“It’s not the tools that you have faith in – tools are just tools. They work, or they don’t work. It’s people you have faith in or not. Yeah, sure, I’m still optimistic I mean, I get pessimistic sometimes but not for long.”-Steve Jobs

“I’ve always wanted to own and control the primary technology in everything we do.”-Steve Jobs

“I’ve done a lot of things I’m not proud of, such as getting my girlfriend pregnant when I was 23 and the way I handled that.”-Steve Jobs

“Now, we are selling over 5 million songs a day now. Isn’t that unbelievable? That’s 58 songs every second of every minute of every hour of every day.”-Steve Jobs

“Our goal is to make the best devices in the world, not to be the biggest.”-Steve Jobs

“Pointing is a metaphor we all know. We’ve done a lot of studies and tests on that, and it’s much faster to do all kinds of functions, such as cutting and pasting, with a mouse, so it’s not only easier to use but more efficient.”-Steve Jobs

Steve Jobs Quotes That Will Inspire You

“Pretty much, Apple and Dell are the only ones in this industry making money. They make it by being Wal-Mart. We make it by innovation.”-Steve Jobs

“Remembering that you are going to die is the best way I know to avoid the trap of thinking you have something to lose. You are already naked. There is no reason not to follow your heart.”-Steve Jobs

“Sometimes life hits you in the head with a brick. Don’t lose faith.”-Steve Jobs

“Sometimes when you innovate, you make mistakes. It is best to admit them quickly, and get on with improving your other innovations.”-Steve Jobs

“Technology is nothing. What’s important is that you have faith in people, that they’re basically good and smart, and if you give them tools, they’ll do wonderful things with them.”-Steve Jobs

“That’s been one of my mantras – focus and simplicity. Simple can be harder than complex: You have to work hard to get your thinking clean to make it simple. But it’s worth it in the end because once you get there, you can move mountains.”-Steve Jobs

“The people who are doing the work are the moving force behind the Macintosh. My job is to create a space for them, to clear out the rest of the organization and keep it at bay.”-Steve Jobs

“The reason that Apple is able to create products like the iPad is that we’ve always tried to be at the intersection of technology and the liberal arts.”-Steve Jobs

“The reason we wouldn’t make a seven-inch tablet isn’t that we don’t want to hit a price point, it’s because we don’t think you can make a great tablet with a seven-inch screen.”-Steve Jobs

“The system is that there is no system. That doesn’t mean we don’t have the process. Apple is a very disciplined company, and we have great processes. But that’s not what it’s about. The process makes you more efficient.”-Steve Jobs

“Things don’t have to change the world to be important.”-Steve Jobs

“To turn really interesting ideas and fledgling technologies into a company that can continue to innovate for years, it requires a lot of disciplines.”-Steve Jobs

“We don’t get a chance to do that many things, and everyone should be really excellent. Because this is our life. Life is brief, and then you die, you know? So this is what we’ve chosen to do with our life.”-Steve Jobs

“We hire people who want to make the best things in the world.”-Steve Jobs

“We made the buttons on the screen look so good you’ll want to lick them.”-Steve Jobs

“We think Android is very, very fragmented, and becoming more fragmented by the day. And as you know, Apple strives for the integrated model so that the user isn’t forced to be the systems integrator.”-Steve Jobs

“We want to reinvent the phone. What’s the killer app? The killer app is making calls! It’s amazing how hard it is to make calls on most phones. We want to let you use contacts like never before – sync your iPhone with your PC or Mac.”-Steve Jobs

“Well, Apple invented the PC as we know it, and then it invented the graphical user interface as we know it eight years later (with the introduction of the Mac). But then, the company had a decade in which it took a nap.”-Steve Jobs

“We’re going to be able to ask our computers to monitor things for us, and when certain conditions happen, are triggered, the computers will take certain actions and inform us after the fact.”-Steve Jobs

“We’re just enthusiastic about what we do.”-Steve Jobs

“What is Apple, after all? Apple is about people who think ‘outside the box,’ people who want to use computers to help them change the world, to help them create things that make a difference, and not just to get a job done.”-Steve Jobs

“What we want to do is make a leapfrog product that is way smarter than any mobile device has ever been, and super-easy to use. This is what the iPhone is. OK? So, we’re going to reinvent the phone.”-Steve Jobs

“When you’re young, you look at television and think, there’s a conspiracy. The networks have conspired to dumb us down. But when you get a little older, you realize that’s not true. The networks are in business to give people exactly what they want.”-Steve Jobs

“Woz is living his own life now. He hasn’t been around Apple for about five years. But what he did will go down in history.”-Steve Jobs

“You can’t just ask customers what they want and then try to give that to them. By the time you get it built, they’ll want something new.”-Steve Jobs

“You know, my main reaction to this money thing is that it’s humorous, all the attention to it because it’s hardly the most insightful or valuable thing that’s happened to me.”-Steve Jobs

“You’ll see more and more perfection of that – computer as a servant. But the next thing is going to be computed as a guide or agent.”-Steve Jobs