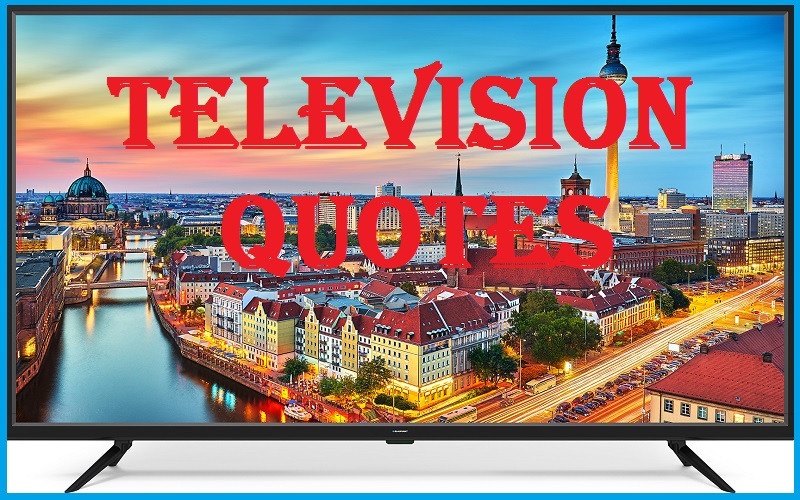 Television Quotes:- Television (TV), sometimes shortened to tele or telly, is a telecommunication medium used for transmitting moving images in monochrome (black and white), or in color, and in two or three dimensions and sound.

The term can refer to a television set, a television program, or the medium of television transmission. Television is a mass medium for advertising, entertainment, and news.

Below you will find our collection of inspirational, wise, and humorous old television quotes, television sayings, and television proverbs, collected over the years from a variety of sources.

“Television is like the invention of indoor plumbing. It didn’t change people’s habits. It just kept them inside the house.”-Alfred Hitchcock 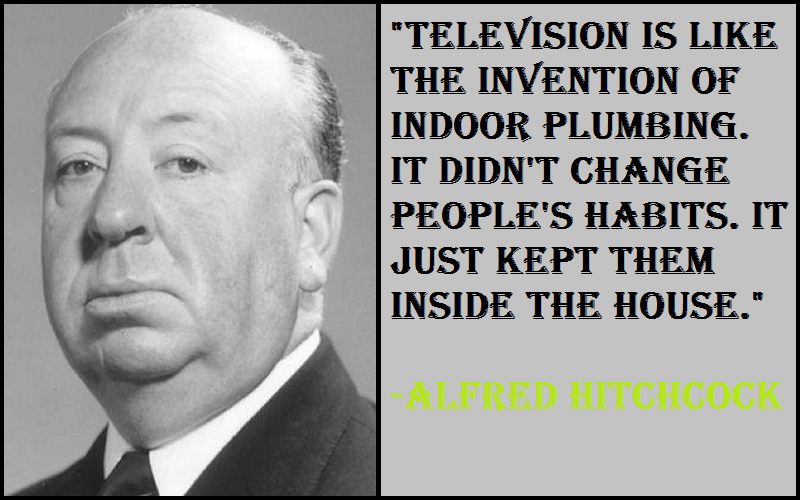 “Television is a medium because anything well done is rare.”-Fred Allen

“Television probably has become the most evocative, widely observed signpost we have.”-Robert Adams

“Television is the triumph of machine over people.”-Fred Allen

“Television is an instrument which can paralyze this country.”-William Westmoreland

“Television could perform a great service in mass education, but there’s no indication its sponsors have anything like this on their minds.”-Tallulah Bankhead

“Television has proved that people will look at anything rather than each other.”-Ann Landers

“I find television very educating. Every time somebody turns on the set, I go into the other room and read a book.”-Groucho Marx

“Television is more interesting than people. If it were not, we should have people standing in the corners of our rooms.”-Alan Coren

“Television enjoys a de facto monopoly on what goes into the heads of a significant part of the population and what they think.”-Pierre Bourdieu

“Network television has been attempting to lure viewers for years with its low-interest programming only to have those viewers discover later that their brains are bankrupt.”-P. J. O’Rourke

“All television is educational television. The question is: what is it teaching?”-Nicholas Johnson

“Television is the most perfect democracy. You sit there with your remote control and vote.”-Aaron Brown

“Television is a golden goose that lays scrambled eggs, and it is futile and probably fatal to beat it for not laying caviar.”-Lee Loevinger

“Television has done much for psychiatry by spreading information about it, as well as contributing to the need for it.”-Alfred Hitchcock

“Television has made dictatorship impossible, but democracy unbearable.”-Shimon Peres

“Television is like the American toaster, you push the button and the same thing pops up every time.”-Alfred Hitchcock

“Television is chewing gum for the eyes.”-Frank Lloyd Wright

“Television has been the single greatest shaper of emptiness.”-Ravi Zacharias

“The most corrosive piece of technology that I’ve ever seen is called television – but then again, television, at its best, is magnificent.”-Steve Jobs

“Television is by nature the dominator drug par excellence. Control of content, uniformity of content, repeatability of content make it inevitably a tool of coercion, brainwashing, and manipulation.”-Terence McKenna

“All you see on television are debased images.”-Prince Rogers Nelson

“In television, everything is gone with the speed of light, literally. It is no field for anybody with intimations of immortality.”-Charles Kuralt

“Television is actually closer to reality than anything in books. The madness of TV is the madness of human life.”-Camille Paglia

“Chilling out on the bed in your hotel room watching television, while wearing your own pajamas, is sometimes the best part of a vacation.”-Laura Marano

“I must say I find television very educational. The minute somebody turns it on, I go to the library and read a good book.”-Groucho Marx

“I remember lying on the floor of my room, staring at a black-and-white television for most of the ’80s – watching ‘Diff’rent Strokes,’ ‘Facts of Life,’ ‘Silver Spoons,’ Saturday morning cartoons, and ‘Murder, She Wrote’ while eating an insane amount of Stouffer’s French bread pizza. I was sucked into it all.”-Jim Rash

“When the stock market crashed, Franklin Roosevelt got on the television and didn’t just talk about the princes of greed. He said, ‘Look, here’s what happened.”-Joe Biden

“Get me well so I can get on television and tell people to stop smoking.”-Nat King Cole