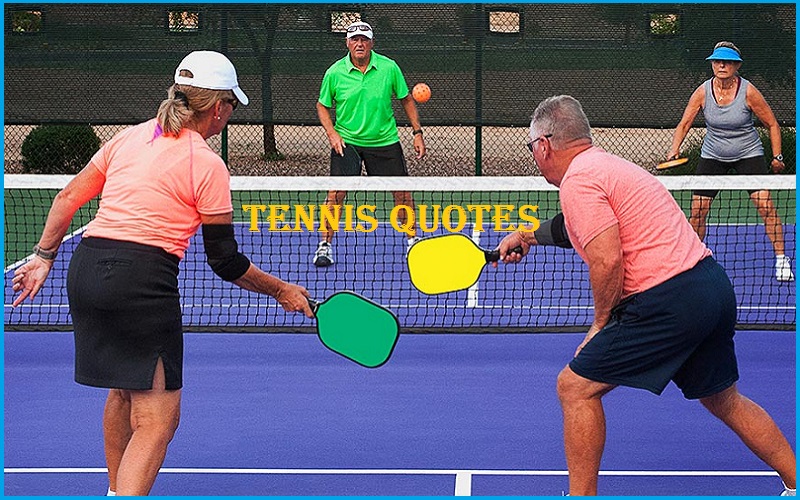 Tennis Quotes:- Tennis is a racket sport that can be played individually against a single opponent or between two teams of two players each.

Each player uses a tennis racket that is strung with a cord to strike a hollow rubber ball covered with felt over or around a net and into the opponent’s court.

Below you will find our collection of inspirational, wise, and humorous old tennis quotes, tennis sayings, and tennis proverbs, collected over the years from a variety of sources.

“Tennis is mostly mental. Of course, you must have a lot of physical skills but you can’t play tennis well and not be a good thinker. You win or lose the match before you even go out there.”-Venus Williams 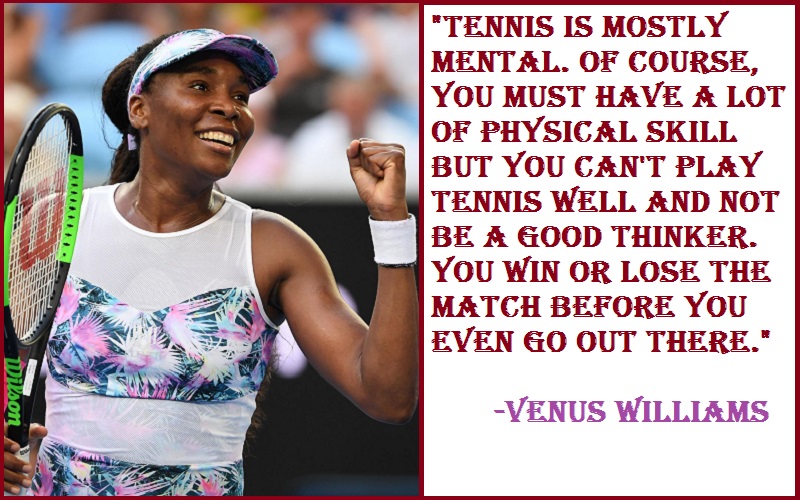 “In tennis, it is not the opponent you fear, it is the failure itself, knowing how near you were but just out of reach.”-Andy Murray

“Tennis is a perfect combination of violent action taking place in an atmosphere of total tranquility.”-Billie Jean King

“The depressing thing about tennis is that no matter how good I get, I’ll never be as good as a wall.”-Mitch Hedberg

“Tennis taught me so many lessons in life. One of the things it taught me is that every ball that comes to me, I have to make a decision. I have to accept responsibility for the consequences every time I hit a ball.”-Billie Jean King 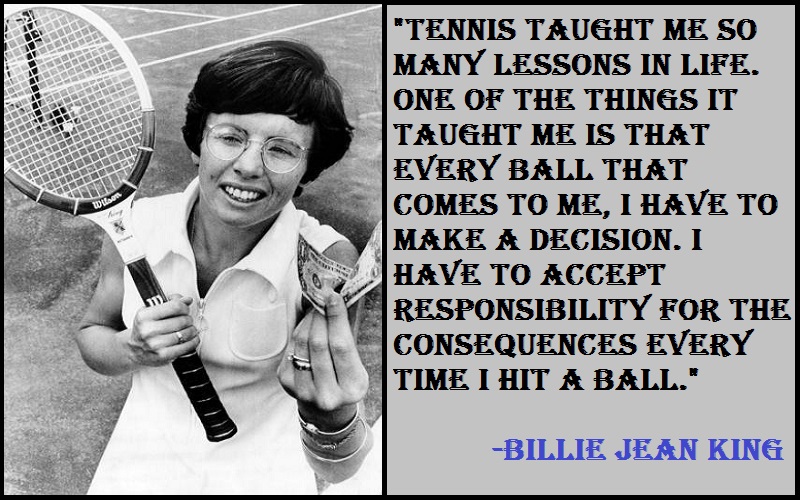 “The next point – that’s all you must think about.”-Rod Laver

“Tennis is the loneliest sport”-Andre Agassi

“Speed in tennis is a strange mixture of intuition, guesswork, footwork and hair-trigger reflexes. Many of the players famed for quickness on the court would finish dead last in a field of schoolgirls in a race over any distance more than ten yards.”-Eugene Scott

30 Best Tennis Quotes of All Time

“It’s difficult for most people to imagine the creative process in tennis. Seemingly, it’s just an athletic manner of hitting the ball consistently well within the boundaries of the court. That analysis is just as specious as thinking that the difficulty in portraying King Lear on stage is learning all the lines.”-Virginia Wade

“Tennis uses the language of life. Advantage, service, fault, break, love, the basic elements of tennis are those of everyday existence because every match is a life in miniature.”-Andre Agassi

“What is the single most important quality in a tennis champion? I would have to say desire, staying in there and winning matches when you are not playing that well.”-John McEnroe

“That’s what you do all the hard work for, to play in situations that put your body through grueling times. If you’re not up to it, pull out.”-Lleyton Hewitt

“What polite game tennis is. The chief word in it seems to be ‘sorry’ and admiration of each other’s play crosses the net as frequently as the ball.”-J.M. Barrie

“Tennis belongs to the individualistic past – a hero, or at most a pair of friends or lovers, against the world.”-Jacques Barzun

“The serve was invented so that the net could play.”-Bill Cosby

“Tennis and golf are best played, not watched”.-Roger Kahn

“Dating a tennis player is risky – love means nothing to us.”-Anna Kournikova

“As a tennis player, you have to get used to losing every week. Unless you win the tournament, you always go home as a loser. But you have to take the positive out of a defeat and go back to work. Improve to fail better.”-Stanislas Wawrinka

“As a tennis player you can win and you can lose, and you have to be ready for both. I practiced self-control as a kid. But as you get older they both – winning and losing – get easier.”-Rafael Nadal

“You are never really playing an opponent. You are playing yourself, your own highest standards, and when you reach your limits, that is a real joy.”-Arthur Ashe

“When I was 40, my doctor advised me that a man in his 40s shouldn’t play tennis. I heeded his advice carefully and could hardly wait until I reached 50 to start again.”-Hugo L. Black

“Tennis is a perfect combination of violent action taking place in an atmosphere of total tranquillity.”-Billie Jean King

“Tennis: a racquet sport in which two players compete to see who has the shortest temper, the worst memory, the poorest eyesight, and the slowest watch.”-Author Unknown

“Tennis is an addiction that once it has truly hooked a man will not let him go.”-Russell Lynes

“Tennis: the most perfect combination of athleticism, artistry, power, style, and wit. A beautiful game, but one so remorselessly travestied by the passage of time.”-Martin Amis

“If you can keep playing tennis when somebody is shooting a gun down the street, that’s concentration.”-Serena Williams

“Though your game is hardly the best, you can fray your opponent’s nerves, by methodically bouncing the ball, at least ten times before your serves.”-Arnold J. Zarett

“An otherwise happily married couple may turn a mixed doubles game into a scene from Who’s Afraid of Virginia Woolf.”-Rod Laver