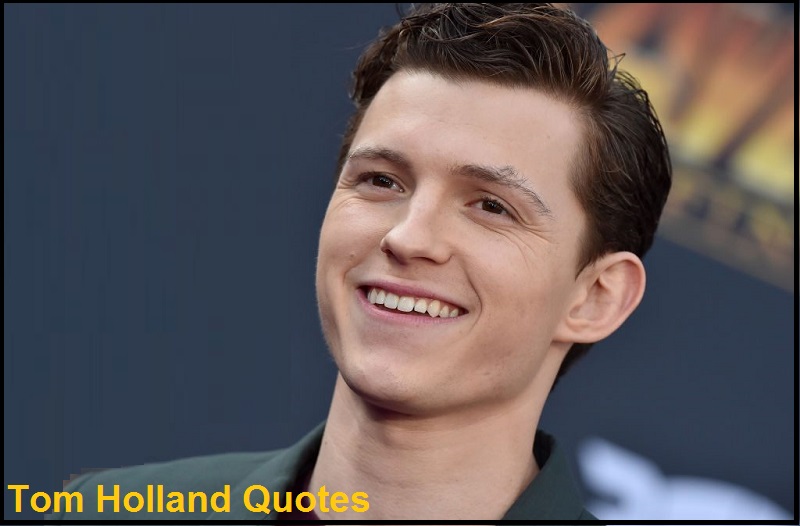 Tom Holland Quotes:- Tom Holland (born 1 June 1996) is an English actor and dancer. He first gained recognition in 2012 for starring in the disaster film The Impossible.

A graduate of the BRIT School in London, Holland previously appeared on stage in the title role of Billy Elliot the Musical in London’s West End in 2008, and his other films include In the Heart of the Sea and The Current War.

“One of the reasons why Spider-Man is my favorite superhero is because we both undergo big changes in our lives.”-Tom Holland 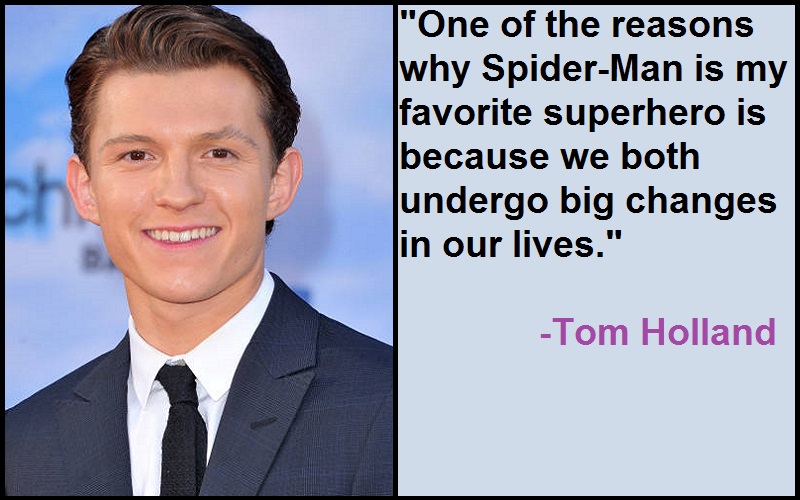 “I personally think if something’s not a challenge, there’s no point doing it, because you’re not gonna learn much.”-Tom Holland

“Colombia is so different from what I know, and every aspect of the country is different from England, and I loved it. I loved the culture and the food, and the coffee was amazing. The place that we were was stunning, and it really was quite an amazing experience to film out there.”-Tom Holland

“Fame is a beast that you can’t control or be prepared for.”-Tom Holland

“I feel like if you put something out into the universe, then you increase your chances of it happening.”-Tom Holland

“Peter Parker is probably the most relatable superhero, maybe ever, because he goes through something that basically everyone has to go through. Whether it’s puberty or talking to girls or doing homework, he does it in such a human way.”-Tom Holland

“If I can bring happiness to people all around the world, then I will try my best to do so.”-Tom Holland

“The most important thing, in anything you do, is always trying your hardest because even if you try your hardest and it’s not as good as you’d hoped, you still have that sense of not letting yourself down.”-Tom Holland

“Every kid goes through puberty, wondering what to do about girls and struggling with homework, and every adult has been through that.”-Tom Holland

“My biggest flaw is probably my attention span or lack thereof. And while it might seem contradictory, my biggest strength is my work ethic.”-Tom Holland

“Adrenaline has always been my thing.”-Tom Holland

“I was truly obsessed with Obi-Wan Kenobi.”-Tom Holland

“The ocean, to me, is one of the most terrifying things on the planet.”-Tom Holland

“I think, from every actor I’ve ever spoken to, they say the biggest thing they regret from life is not finishing school.”-Tom Holland

“Dublin is one of my favorite cities. It’s an absolutely amazing place.”-Tom Holland

“I started dancing because of Janet Jackson.”-Tom Holland

“There’s too much we don’t know about the ocean to make me feel comfortable around it.”-Tom Holland

“I’d love to make a movie with Tom Hardy. If we ever got the chance to make a Venom movie together, that would be super-cool, but his movie would have to take place in the MCU because I’m not giving up my ticket in the MCU.”-Tom Holland

“I am definitely the same person I was when I finished ‘The Impossible.’ That’s one of the things I really strive to keep.”-Tom Holland

“When I’m acting, it’s like I am the character – no one can talk to me. But I’m not so the method I’d sell my house and live on the street to play a tramp.”-Tom Holland

“I feel like I’ve been playing Spider-Man my whole life. He’s a character I’ve been pretending to be in my bedroom since I was a kid – so I’ve been preparing for this forever, I think.”-Tom Holland

“I have a photographic memory.”-Tom Holland

“When I’m on set, I don’t really think about what an audience is going to think about a scene. I’m just thinking about how I can make it best. And how I can enjoy myself most.”-Tom Holland

“There is so much to sailing a ship. There are about a thousand different lines on a brig ship, and knowing what each one of those does, it takes a long time, and that’s why you have these cabin boys that start on the ship, and they learn throughout the years, and that’s why it takes so long to captain one.”-Tom Holland

“My goal was to try and kind of be our generation’s Marty McFly. That was what my all-time goal was.”-Tom Holland

“I can’t even touch my toes!”-Tom Holland

“I think, for me, I’ve realized the responsibility of being a role model for young kids everywhere.”-Tom Holland

“Peter Parker can’t dance. He can flip and climb up walls and do backflips, but he definitely can’t dance.”-Tom Holland

“I completely and utterly rely on my mum. Without my mum, I would not be anywhere at all. I’d literally just be a couch potato.”-Tom Holland

“I always wanted to be a stuntman. If acting went well and I was able to take a year out, I might train and get on the stunt register, which gives you qualifications so you can do more of your own stunts.”-Tom Holland

“I remember actually going to see the first ‘Avengers’ with one of my best mates from home. I’d never have dreamed that I’d be in one of these movies, let alone playing Spider-Man.”-Tom Holland

“I went to an all-boys school, where I played rugby, so ballet wasn’t the coolest thing to do.”-Tom Holland

“My teenage life was a little strange.”-Tom Holland

“I’m studying theater and media. I don’t really know why I took media, because I’m so useless with technology, though it’s fun. But, I do love theater and am having a great time learning about all the practitioners and getting to perform with my friends.”-Tom Holland

“Like, 100 percent, I hate spiders. I thought I really liked them, and I learned that was just false. I really can’t be around spiders. It scares me so much.”-Tom Holland

“I never thought I would be Spider-Man in an ‘Avengers’ movie, but it’s such a surreal experience, dude. It’s so crazy.”-Tom Holland

“I’m never quite cool if you know what I mean. I’m basically the worst, best superhero.”-Tom Holland

“Peter Parker is probably the most relatable superhero – maybe ever – because he goes through something that basically everyone has to go through. Whether it’s puberty or talking to girls or doing homework, he does it in such a human way. That’s why he’s such a beloved character: because so many people can relate to him.”-Tom Holland

“I’ve always had an argument with my best friend that Spider-Man was way better than Batman. I was a massive fan growing up.”-Tom Holland

“I don’t mind sitting at home playing the guitar for a year as long as I’m making good films.”-Tom Holland

“On stage, you need to emphasize every emotion. But on the screen, you need to tone everything down and make it believable.”-Tom Holland

“I’d like to be a director who gives my actors complete freedom while collaborating with them to find performances.”-Tom Holland

“When Ron Howard rings you up and says, ‘I’d like you to do my film,’ you do it.”-Tom Holland

“I remember watching ‘Avengers 1’ for the first time and thinking, ‘God, one day I want to be in one of those movies.’ I just want to be in the movie.”-Tom Holland

“Spider-Man has always been a huge part of my life. I love the movies. I love the comics. And I always just wanted to be Spider-Man.”-Tom Holland

“It’s important not to make Spider-Man masculine because he’s a kid. As soon as you make him masculine, it’s harder to relate to him if you are younger and are in high school. I definitely was not masculine in high school.”-Tom Holland

“The best thing about shooting in Atlanta at night is that it’s not as hot as it is during the day.”-Tom Holland

“I was an ordinary student at school and, at the same time, an actor. But I was not the popular kid, which helped me to play Peter Parker better.”-Tom Holland

“Marvel actually sent me to a school in the Bronx where I had a fake name, and I put on an accent, and I went for, like, three days. I basically had to go to this science school and blend in with all the kids, and some of the teachers didn’t even know.”-Tom Holland

“I was terrified of watching the ‘Civil War’ for the first time.”-Tom Holland

“It’s so fantastic for young kids to see a superhero going through the things they go through.”-Tom Holland

“The Internet has perceived me as this fantastic dancer. I can still do a couple of pirouettes, but I am by no means a proper dancer.”-Tom Holland

“I really am having the time of my life. But as far as my future goes, I want to stretch myself as an actor in a way that Jake Gyllenhaal, Leonardo DiCaprio, and Meryl Streep do.”-Tom Holland

“A lot about this industry is about who you know. If you set a really good example for yourself, and someone likes that, then they might recommend you to someone else. It doesn’t matter what job you’re in, any profession, it’s always the same.”-Tom Holland

“I went to an ordinary primary school, and then I started performing in a show called ‘Billy Elliot’ in the West End, and that was sort of my drama school.”-Tom Holland

“As an actor, I love a challenge.”-Tom Holland

“I haven’t seen ‘The Empire Strikes Back’ – I’m not gonna lie.”-Tom Holland

“For some reason, I skipped the original ‘Star Wars.’ I don’t know why, and I’m very embarrassed.”-Tom Holland

“My big thing was when you see a superhero movie where their powers ain’t consistent – like, they lift a truck but then struggle to fight just a regular human being – it makes it harder to believe.”-Tom Holland

“There are so many things we have not seen in ‘Spider-Man’ yet… I want to use bad guys never seen in movies. The first films were so traditional and so scrupulously followed the character’s classic plot… So there’s a lot of stuff left in stock. ‘The Clone Saga,’ for example.”-Tom Holland

“It’s definitely a good way to stay in touch with your fans. The main reason I really use Instagram is that I want to hear their thoughts and what would they like to happen and see if I can make that happen. Which is a really nice way of being in touch with them all around the world.”-Tom Holland

“I try and let the film do the talking.”-Tom Holland

“Zendaya is the one. At serving looks, she is the one to go to for tips.”-Tom Holland

“It was amazing for me to play a character opposite Benedict Cumberbatch – he’s someone who I’ve looked up to for years – and the idea that I would work with him and then become friends with him was an amazing experience.”-Tom Holland

“I’ve got a huge family back in Ireland, and I’ve made loads of movies in Ireland.”-Tom Holland

“Teleportation would be the best because I live on airplanes. It would be super handy to be able to teleport around.”-Tom Holland

“I don’t read that many books – I tend to read scripts for projects.”-Tom Holland

“I’ve made ‘The Pilgrimage’ – where I actually had to speak Gaelic – and I was shooting in Belfast as well.”-Tom Holland

“It’s very easy to relate to a kid who is having trouble in high school… less so to relate to a billionaire whose Lamborghini broke down.”-Tom Holland

“That’s what I love about working for Marvel is how welcoming and kind everyone is.”-Tom Holland

“Spider-Man is loved by a huge range of people. I think the real target audience is people younger than 16. It’s because he’s going through what they’re going through.”-Tom Holland