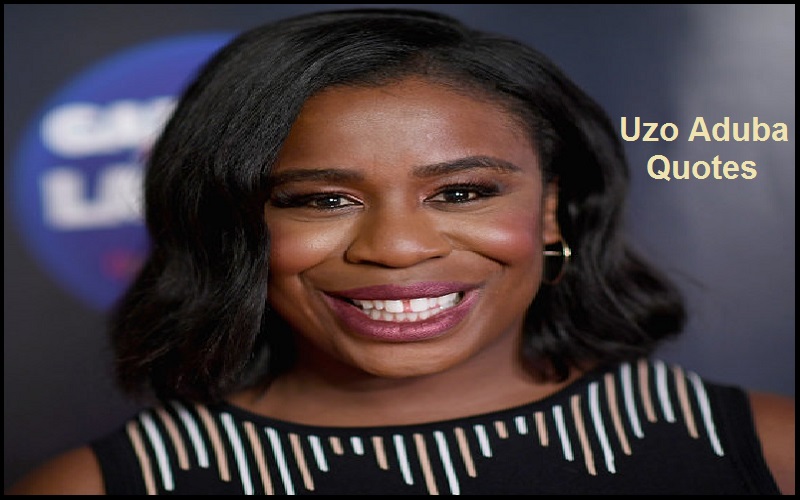 Uzo Aduba:- Uzo Aduba ( born February 10, 1981) is an American actress. She is known for her role as Suzanne “Crazy Eyes” Warren on the Netflix original series Orange Is the New Black.

Two Screen Actors Guild Awards for Outstanding Performance by a Female Actor in a Comedy Series in 2014 and 2015. She is one of only two actors to win an Emmy Award in both the comedy and drama categories for the same role, the other being Ed Asner for the character Lou Grant. She also voices Bismuth in the Cartoon Network series Steven Universe.

“My parents wanted us to be well-rounded individuals and really have the American experiences as richly as one can.”-Uzo Aduba 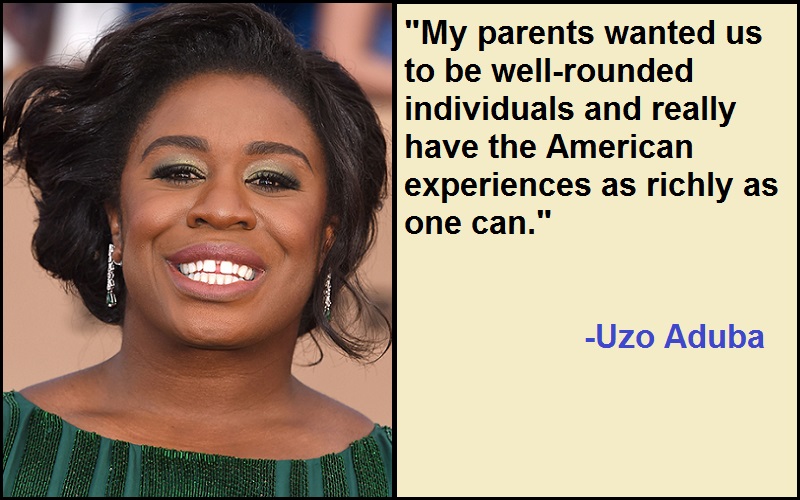 “I kept hiding my smile in pictures throughout middle school and most of the high school until picture day came my senior year.”-Uzo Aduba

“My family is more a sports family, and I figure skated for a very long time, so movement and how I relate to movement is very integral to my process.”-Uzo Aduba

“My mother is a fighter. Instead of accepting defeat, she refused this fate and went on to become the West African Women’s Singles tennis champion in college.”-Uzo Aduba

“When it comes to inmates, we have boiled them down to just a few things we know about them – their crime, their current life situation, their identification number. But the reality is they were something before they were their crime.”-Uzo Aduba

“In performance, you don’t always feel that sort of family bond right off the top. It sort of develops and grows over time.”-Uzo Aduba

“I try to play serious scenes a little funny and the comedy a little serious.”-Uzo Aduba

“I think there’s something really thrilling to having to get people laughing about something, and then, when you have them in that comfort space, you can drop the weight into the texture of the story.”-Uzo Aduba

“The first information I consume in the morning is probably ‘The New York Times’ and then my Twitter feed. I think Twitter is a really fascinating, easy way to stay on top of what stories are out there.”-Uzo Aduba

“On some days in prison you might just need to get out of there, but on some days – not all days, but some – you might be able to see the sky and see the blue in it.”-Uzo Aduba

“I am the daughter of Nigerian immigrants. My mother is a survivor of both polio and of the Igbo genocide during her country’s civil war in the late 1960s.”-Uzo Aduba

“People were stopping me on the street to say, ‘Oh my God, it’s Crazy Eyes!’ Which is kind of a funny thing to have people shout at you on the street.”-Uzo Aduba

“I’d read a lot of scripts, and I remember reading ‘Orange Is the New Black,’ and it was at the head of the pack. I remember thinking, ‘Wow, that is really good. I would love to be a part of that.'”-Uzo Aduba

“You think the only thing looking at you is this steel thing, but behind the camera is this living, breathing person operating the camera whose job it is to watch you.”-Uzo Aduba

“I grew up in a very small town in Massachusetts, and it goes without saying that there weren’t many Nigerian families in that town, and a lot of people couldn’t say Uzoamaka.”-Uzo Aduba

“Onstage, even though you’re here together with the other actor, face-to-face, playing out the scene, you also have that other ear pointed out toward the audience and how they’re listening. That informs a lot.”-Uzo Aduba

“I come from Nigeria, and we live by the idea that it takes a village. So my entire team. I live by my team: my friends, my neighbors, my teachers – they’re the people who taught me how to be a free actor.”-Uzo Aduba

“Natasha Lyonne is fantastic on Twitter. She posts hilarious pictures. I don’t even know where she finds some of them; it’ll be like a random picture of a chinchilla kissing a lion or Bill Murray and Jim Belushi out on a boat or something.”-Uzo Aduba

“My finding of myself as an artist, which I think in itself helped me to find just who I am and how I want to express myself, is entire – in conjunction, of course, with my family, particularly my mom – founded on teachers.”-Uzo Aduba

“I loved ‘Ghana Must Go’ by Taiye Selasi. It’s about a first-generation African family living in America that has to return home to Nigeria when their estranged father passes away.”-Uzo Aduba

“I like to build a character, trying to stretch my imagination as far to the walls of my brain as I can to come up with something that feels truthful and feels real – as close to the skin as I can get it.”-Uzo Aduba

“When I was little, I didn’t smile much. Don’t get me wrong. I was a happy kid, but I couldn’t stand the space, dead center, in between my teeth. Yeah, I could whistle through it, but so what? That didn’t win me many points on the playground in Medfield, Massachusetts.”-Uzo Aduba

“My family is a first-generation Nigerian, and we grew up in a very small, suburban town in New England, Massachusetts. So I do understand what it feels like to be an ‘only in that regard.”-Uzo Aduba

“I think of myself as a little kid, and I had a wild imagination, but it was something that was encouraged and supported, which helped steer me into the arts.”-Uzo Aduba

“I was in New York doing musicals in the theater and on Broadway before ‘Orange,’ so people always ask, ‘Are you ever going to get to sing? Does she even sing?’ But people who know me know I actually do sing.”-Uzo Aduba

“I used to be a huge fan of ‘Lockup’ on MSNBC, and that certainly has helped with my understanding of the world.”-Uzo Aduba

“As for the fake teeth, they’re officially retired. I haven’t really found a need or want to wear them.”-Uzo Aduba

“My family is from Nigeria, and my full name is Uzoamaka, which means ‘The road is good.'”-Uzo Aduba

“I might literally fall over dead if I meet Oprah Winfrey. I’m kind of joking, but I’m not confident that wouldn’t happen.”-Uzo Aduba

“I was pursuing the arts with theater in school, and I was doing after-school activities, but not in any real movement towards a professional career.”-Uzo Aduba

“The magic of landing my first role on Broadway went ‘poof’ in a matter of a few weeks.”-Uzo Aduba

“I dream in color, and I have visions of feelings and energies that I would love to feel.”-Uzo Aduba

“I’m obsessed with ‘Scandal.’ I love, love, love it. I’ve gotten to meet all of the cast at this point, and they’re all so, so nice.”-Uzo Aduba