23 Views
Comments Off on Motivational Mr. T Quotes And Sayings
0 0 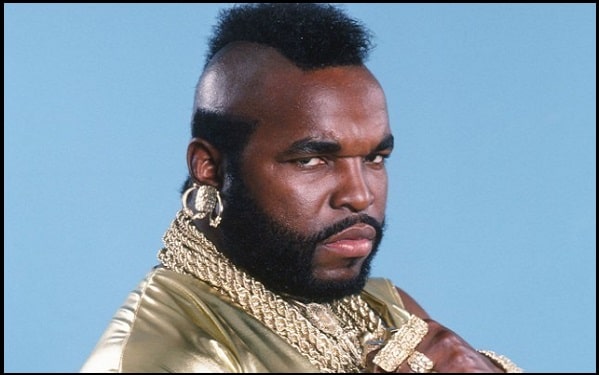 Mr. T Quotes:- Mr. T (born May 21, 1952) is an American actor, bodyguard, television personality, and retired professional wrestler, known for his roles as B. A. Baracus in the 1980s television series The A-Team and as boxer Clubber Lang in the 1982 film Rocky III.

Mr. T is known for his distinctive hairstyle inspired by Mandinka warriors in West Africa, his gold jewelry, and his tough-guy image. In 2006, he starred in I Pity the Fool, a reality show shown on TV Land; the title of the show comes from the famous catchphrase used by his character, Clubber Lang.

“I said I would never wear my gold again because it would be insensitive and disrespectful to all the people who died and lost everything in Katrina.”-Mr. T 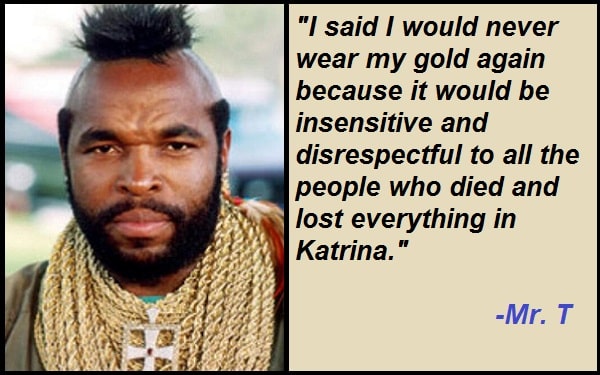 “If people are cool, then they are not stressed. I pity the fool that doesn’t be cool.”-Mr. T

“You pity the fool because you don’t want to beat up a fool! You know, pity is between sorry and mercy. See, if you pity him, you know, you won’t have to beat him up. So that’s why I say fools, you gotta give another chance because they don’t know any better. That’s why I pity them!”-Mr. T

“Any man who doesn’t love his mama can’t be no friend of mine.”-Mr. T

“I believe in the Golden Rule – The Man with the Gold… Rules.”-Mr. T

“I’m tough when I have to be, tender when I should be. When you find a really tough guy, he’s not a predator. He doesn’t have to prove himself. Guys who have to pretend to be tough, they ain’t. I’m tough.”-Mr. T

“When I was growing up, my family was so poor we couldn’t afford to pay attention.”-Mr. T

“I thank God I’m in a position where I can pick and choose – there are some roles I don’t play.”-Mr. T

“I am a Christian, and the Bible teaches me to forgive.”-Mr. T

“If every man loves his mother, he’s going to treat the ladies right, with love and respect.”-Mr. T

“Whatever role I play is a positive role; it’s a strong role. Never negative.”-Mr. T

“I try to use my experience and the fact that I grew up in the ghetto – I tell people you don’t have to rob or steal to get out of the ghetto.”-Mr. T

“I am tough, but deep inside my toughness, I like to let people know I’m an old-fashioned mama’s boy.”-Mr. T

“When I was old enough to change my name, I changed it to “-Mr. T so that the first word out of someone’s mouth was ‘Mister,’ a sign of respect.”-Mr. T

“I have a heart of gold, but I’m really a marshmallow in my heart.”-Mr. T

“I don’t like magic – but I have been known to make guys disappear.”-Mr. T

“When I was nine years old, living on the south side of Chicago, my father was a minister and my mother used to scrub floors. I had seven brothers and four sisters. I told my mama, ‘One of these days I’m going to be big and strong and buy you a beautiful house.’ That’s all I’ve ever wanted to do with my life, is to take care of my mother.”-Mr. T

“My momma didn’t clean up floors so I could be a thug… so I could wear my pants down.”-Mr. T

“Don’t be getting sloppy drunk and telling them dirty jokes.”-Mr. T

“My mother told me, ‘Son, nobody else but God knows.’ And that’s what I’m about – reaching out to the people, crying with them, giving them hope. Visiting the hospital, visiting the kids with cancer, visiting the adults, and stuff like that. That’s what I do.”-Mr. T

“As a Christian, you forgive, and you feed the hungry and clothe the naked, and you visit the sick and comfort the lonely. If I’m a true follower of my lord and savior Jesus Christ, I got to do the things you’re supposed to be doing.”-Mr. T

“If you get knocked down – setbacks in life, like applying for a job if they don’t hire you – keep trying, keep getting up, keep doing it.”-Mr. T

“If you gonna wear the mohawk, you stick with it. You don’t just be Libby-dabbing. You make up your mind.”-Mr. T

“One time, this guy was bothering my mother, and I and my brothers had a stern talking with the guy and a little bit of physicality with him. So he disappeared. But I’m not a magician.”-Mr. T

“You might not have the things you want, but if you check carefully, you got all you need.”-Mr. T

“Basically, I wear sandals, like Jesus. When it gets cold in Chicago, the snow way up to my knees, I still wear my sandals. But that’s me.”-Mr. T

“God didn’t make me make movies, flex muscles, buy gold. What you love the most becomes your God… If I never make another dollar, my life is complete.”-Mr. T

“I sent out a tweet, ‘Dancing with the Stars’ should stop the jibber-jabber. They shouldn’t make the departure of a dancer so tear jerky because nobody’s going to war.”-Mr. T

“I always was a Christian… whatsoever a man thinks in his heart is who he is.”-Mr. T

“I always say I’m one of the toughest mama’s boys you’re ever gonna meet. And I say that to send a message to all the young thugs out there; that it’s nothing to be ashamed of to say you love your mother.”-Mr. T

“Stay humble and be concerned for the less fortunate.”-Mr. T

“I want to represent… to the kids to draw strength from me. So they can see that everybody goes through something, but you can rise up and do your best. Just try.”-Mr. T

“Really, you don’t lose until you stop trying.”-Mr. T

“My celebrity status allows me an opportunity, allows me a pulpit to preach and reach out to the people. Not even always preaching but just leading, motivating them by being a leader.”-Mr. T

“I take a lot of pride in the work I do because people pay to see me. They’ve got to get babysitters, park their car, get popcorn and candy. I’ve got to be conscious of that.”-Mr. T

“All I ever wanted to do with my life was own a little house. I did that way back with ‘Rocky,’ so now everything I do is just icing on the cake.”-Mr. T

“When I was little, I used to adore gold. It was something special.”-Mr. T

“Back in the day, I would wear up to 45 pounds of gold. It would take me four hours to get dressed!”-Mr. T

“I’m a bold Christian, not a scaredy-cat Christian.”-Mr. T

“When I’m in the house of God, I don’t wear my jewelry, if you’re looking for my jewelry. All you see is my heart of gold.”-Mr. T

“I’ll never have a wedding. I don’t want to marry just to do what everybody else is doing.”-Mr. T

“I’m not a star. I don’t feel I’m so great. So how can I make you feel great just because you’ve got my signature on a piece of paper?”-Mr. T

“My mother is a strong, wonderful woman. I could never be anything she didn’t want me to be.”-Mr. T

“To be a bodyguard is to be a kamikaze pilot. Dedicated.”-Mr. T

“My gold, my money couldn’t stop cancer from appearing on my body. If they can’t save me, then I don’t need them.”-Mr. T

“We all gonna die eventually from something or other, but don’t be a wimp. Put up a good fight.”-Mr. T

“I don’t have a problem with Hulk Hogan. People say things and do things, and who am I to judge?”-Mr. T

“Everybody has done something that we wish we didn’t say or do and wish we could take it back.”-Mr. T

“I would never do a commercial if I thought it was offensive to anyone.”-Mr. T

“This guy Clubber Lang, I’ve been him all my life. He’s mean and hungry just like me.”-Mr. T

“My mother raised me with God. We were poor financially, but we were rich spiritually.”-Mr. T

“I was one of the wildest Santa Clauses they ever had.”-Mr. T

“I used to carry my father’s Bible and put it on the pulpit so he could preach.”-Mr. T

“I used to bodyguard for some celebrities and other people, and when I wasn’t doing that, I used to work at a disco as a doorman or a bouncer.”-Mr. T

“I use my celebrity status to inspire someone, to give them hope.”-Mr. T