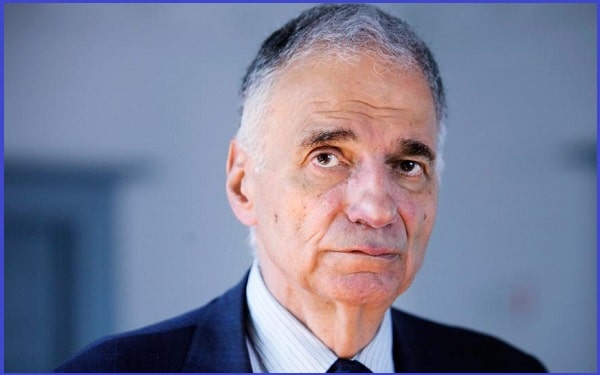 Following the publication of Unsafe at Any Speed, Nader led a group of volunteer law students—dubbed “Nader’s Raiders”—in an investigation of the Federal Trade Commission, leading directly to that agency’s overhaul and reform.

“The only difference between the Republican and Democratic parties is the velocities with which their knees hit the floor when corporations knock on their door. That’s the only difference.”-Ralph Nader 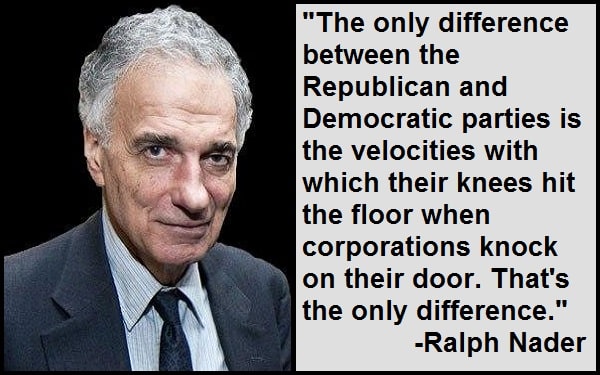 “Your best teacher is your last mistake.”-Ralph Nader

“The use of solar energy has not been opened up because the oil industry does not own the sun.”-Ralph Nader

“The function of leadership is to produce more leaders, not more followers.”-Ralph Nader

“The networks are not some chicken-coop manufacturing lobby whose calls nobody returns.”-Ralph Nader

“I don’t think meals have any business being deductible. I’m for separation of calories and corporations.”-Ralph Nader

“Up against the corporate government, voters find themselves asked to choose between look-alike candidates from two parties vying to see who takes the marching orders from their campaign paymasters and their future employers. The money of vested interest nullifies genuine voter choice and trust.”-Ralph Nader

“The ‘democracy gap’ in our politics and elections spells a deep sense of powerlessness by people who drop out, do not vote, or listlessly vote for the ‘least bad’ every four years and then wonder why after every cycle the ‘least bad’ gets worse.”-Ralph Nader

“Every time I see something terrible, it’s like I see it at age 19. I keep a freshness that way.”-Ralph Nader

“The corporate lobby in Washington is basically designed to stifle all legislative activity on behalf of consumers.”-Ralph Nader

“This country has far more problems than it deserves and far more solutions than it applies.”-Ralph Nader

“I start with the premise that the function of leadership is to produce more leaders, not more followers.”-Ralph Nader

“The liberal intelligentsia has allowed its party to become a captive of corporate interests.”-Ralph Nader

“A leader has the vision and conviction that a dream can be achieved. He inspires the power and energy to get it done.”-Ralph Nader

“There can be no daily democracy without daily citizenship.”-Ralph Nader

“Sanctions against polluters are feeble and out of date, and are rarely invoked.”-Ralph Nader

“Let’s not just look at it as taking votes away from Gore. Our support comes from a lot of people.”-Ralph Nader

“Once you don’t vote your ideals… that has serious undermining affects. It erodes the moral basis of our democracy.”-Ralph Nader

“It is fascinating to watch legislators turn away from their usual corporate grips when they hear the growing thunder of the people.”-Ralph Nader

“I once said to my father, when I was a boy, ‘Dad we need a third political party.’ He said to me, ‘I’ll settle for a second.'”-Ralph Nader

“If God hadn’t meant for us to eat sugar, he wouldn’t have invented dentists.”-Ralph Nader