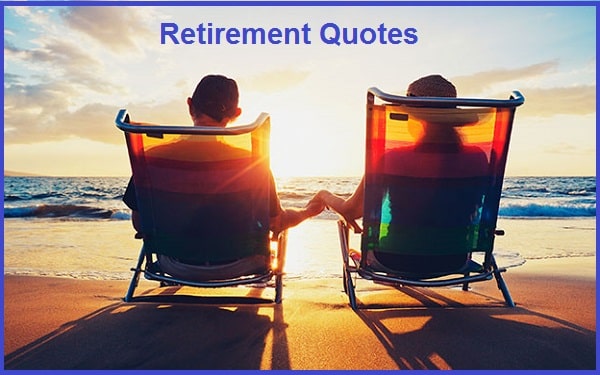 Retirement Quotes:- Retirement is the withdrawal from one’s position or occupation or from one’s active working life. A person may also semi-retire by reducing work hours.

An increasing number of individuals are choosing to put off this point of total retirement, by selecting to exist in the emerging state of pre-retirement.

“Retirement may be looked upon either as a prolonged holiday or as a rejection, a being thrown on to the scrap-heap.”-Simone de Beauvoir 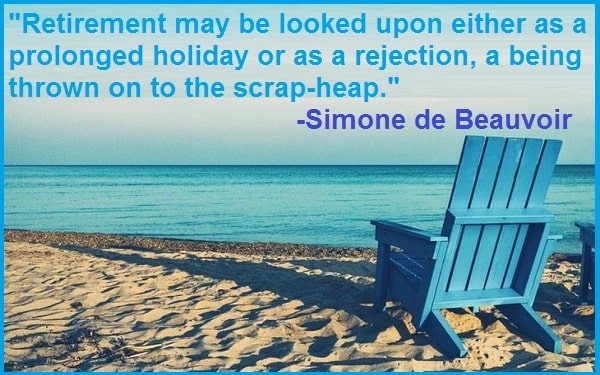 “During the Enron debacle, it was workers who took the pounding, not bankers. Not only did Enron employees lose their jobs, but many also lost their retirement savings. That’s because they were at the bottom of the investing food chain.”-Robert Kiyosaki

“Retirement at sixty-five is ridiculous. When I was sixty-five I still had pimples.”-George Burns

“There are some who start their retirement long before they stop working.”-Robert Half

“I haven’t quite got the hang of this retirement thing.”-Walter Cronkite

“I wanted to have more time to play and reflect, but I find retirement more stressful than having a nice, steady job because I have to make decisions about where I want to be.”-Walter Cronkite

“If you pay off your mortgage before retirement, you take a huge financial load off your shoulders. You also become eligible to take out a reverse mortgage once you turn 62.-Suze Orman

“I love the Roth IRA. Tax-free income in retirement is a truly great deal.”-Suze Orman

“Pay off your mortgage before retirement, and that’s one less bill you’ll have to worry about when you’re on a fixed income.”-Suze Orman

“There is only one ‘retirement plan’ for terrorists.”-Jim Mattis

“Wisdom and penetration are the fruit of experience, not the lessons of retirement and leisure. Great necessities call out great virtues.”-Abigail Adams

“I think that retirement is the first step towards the grave.”-Hugh Hefner

“Retirement from work has depressed many a man and hastened his death.”-Ezra Taft Benson

“Going through chemo is like investing money in a retirement account. You feel the hit right now, but later in life, you get to reap the benefits – by still being alive.”-Regina Brett

“Retirement is not in my vocabulary. They aren’t going to get rid of me that way.”-Betty White

“The chief role of the universities is to prolong adolescence into middle age, at which point early retirement ensures that we lack the means or the will to enforce significant change.”-J. G. Ballard

“I accept everything which is favorable for the people and the army; for myself, I wish to live in retirement.”-Toussaint Louverture

“If anything could have pulled me out of retirement, it would have been an Indiana Jones film.”-Sean Connery

“Those who believe that after I have left the government as prime minister, I will go into permanent retirement, really should have their heads examined.”-Lee Kuan Yew

“I guess I don’t really believe in retirement. I believe in shorter days and maybe at weekends!”-Alice Waters

“In spite of reports about playing with various teams, I’m enjoying retirement with my family and have no plans to play football.”-Brett Favre

“I don’t need to have a retirement, retire your jersey, all that stuff to solidify my career.”-Brett Favre

“What’s just about a generation of people who rack up government debt for their own health care and retirement – while leaving their children and grandchildren to foot the bill?”-Rupert Murdoch

“I never thought ‘Sodapop Curtis’ would announce my retirement. I always thought I would be the one to announce it. I’m a huge fan of the movie, but that caught me way off guard. I can’t explain it.”-Peyton Manning

“When you are 25, 30, you know, you have no responsibility, no mortgage, no kids, no retirement to think about, nothing.”-Eric Ripert

‘I’m really in retirement. My career is over. I’m just playing now and having a great time. I like to keep busy, and I’m doing what’s fun for me.”-Dick Van Dyke

“Countries get one chance in history of putting into place a savings retirement scheme on the scale of the Australian superannuation system.”-Paul Keating

“If you’re just starting out in the workforce, the very best thing you can do for yourself is to get started in your workplace retirement plan. Contribute enough to grab any matching dollars your employer is offering (a.k.a. the last free money on earth).”-Jean Chatzky

“Knowing where you stand in your quest to accumulate enough money for retirement is an incredibly important part of the planning process.”-Jean Chatzky

“Since my retirement, I’ve spent a lot of time trying to help the School of Social Work at the University of North Carolina. A society like this just can’t afford an uneducated underclass of citizens.”-Charles Kuralt

“I bless God for this retirement: I never was more thankful for anything than I have been of late for the necessity I am under of self-denial in many respects.”-David Brainerd

“People who refuse to rest honorably on their laurels when they reach retirement age seem very admirable to me.”-Helen Hayes

“You can never have the comeback if you don’t have the retirement.”-Chael Sonnen

“Money isn’t everything, but it is when you start thinking about putting money away for your retirement days.”-Andre Leon Talley

“This will be Valegro’s retirement after Rio, so I want to go out there and want to enjoy every last minute.”-Charlotte Dujardin

“There are times when the presence of more choices can make us choose things that are not good for us. For me, the clearest example is that the more retirement fund options a person has, the less likely they are to save for their old age.”-Sheena Iyengar

“The rate of return on Social Security for people nearing retirement is about 1.5 percent. By the time young children like mine are ready to retire, that rate of return will be a negative percentage.”-Paul Ryan

“Even though I’ve reached retirement age, I still plan to work – writing my investment newsletter, speaking at conferences, publishing books, and producing conferences like FreedomFest.”-Mark Skousen

“Higher wages for American workers are not just good for American families, they are good for our economy. I will keep fighting for a raise for hard-working Americans so our families can afford to house, help their children get a quality education, and secure a good retirement.”-Jan Schakowsky

“A whole generation of Americans will retire in poverty instead of prosperity because they simply are not preparing for retirement now.”-Scott Cook

“The political lives of tyrants play out human affairs with a special intensity: the death of a democratic leader long after his retirement is a private matter, but the death of a tyrant is always a political act that reflects the character of his power.”-Simon Sebag Montefiore

“I wanted to start a proper academy and recruit juniors from all over Pakistan following my retirement after the World Open in 1993 but there was no support.”-Jahangir Khan

“We need to take steps to strengthen and mend Social Security so that its promise of a secure retirement is just as real for seniors in the future as it is today.”-Herb Kohl

“I want to go out in dramatic fashion. Win, lose or draw, I want to have a retirement match, and a lot of guys have done it.”-Mark Henry

“I feel alive, fit and active. I have no plans for retirement. My only concession to getting a little older is that I like to have a cat-nap in the afternoon. After that, I can push on through anything.”-Olivia Newton-John

“I would not vote to raise the retirement age to 70 because there are just too many Americans that work hard all their lives and just simply physically couldn’t work until they are 70.”-Bill Flores

“It’s not surprising so many people end up with credit card debts. Saving for your retirement and buying a house are difficult things, and we don’t educate people about them at all.”-Niall Ferguson

“Today more people believe in UFOs than believe that Social Security will take care of their retirement.”-Scott Cook

“A comfortable retirement should not only be a luxury for the wealthy but a reality for every New Yorker.”-Letitia James

“I want that fifth championship. If that does not present itself, then I’m closer to retirement.”-Juan Manuel Marquez

“I want to work to help all those working a lifetime to be confident they will have a secure and dignified retirement.”-Brad Schneider

“Being retired is one thing, but staying retired is another. Even when I announced my retirement, I’m sure people thought I was going to come back.”-Joe Calzaghe

“I haven’t thought of retirement yet, but when I stop enjoying the game or when injuries force me, I will quit.
-Sania Mirza

“Social Security is the only thing most Americans can count on to keep them out of poverty during retirement.”-Ted Deutch

“We know what’s in our Cheerios and in our retirement accounts because the law requires disclosure.”-Barton Gellman

“I’m conscious that there’s only a limited amount that I’ll get done before I get shuffled into retirement, but I certainly have no desire to retire.”-Sam Neill