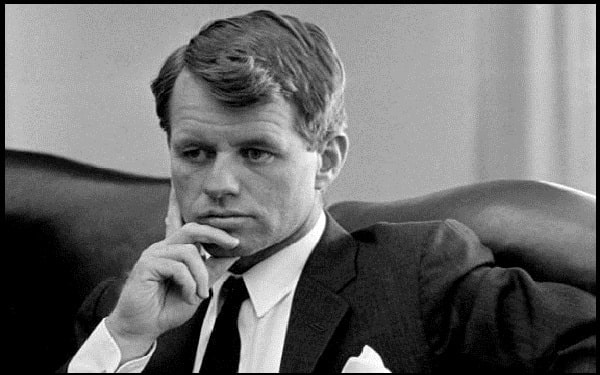 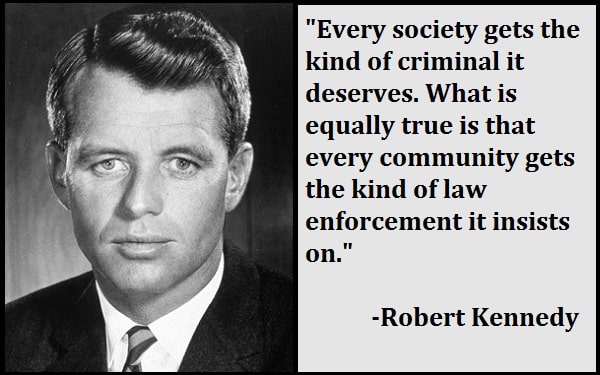 “I believe that, as long as there is plenty, poverty is evil.”-Robert Kennedy

“Let us dedicate ourselves to what the Greeks wrote so many years ago: to tame the savageness of man and make gentle the life of this world.”-Robert Kennedy

“But suppose God is black? What if we go to Heaven and we, all our lives, have treated the Negro as an inferior, and God is there, and we look up and He is not white? What then is our response?”-Robert Kennedy

“People say I am ruthless. I am not ruthless. And if I find the man who is calling me ruthless, I shall destroy him.”-Robert Kennedy

“Progress is a nice word. But change is its motivator. And change has its enemies.”-Robert Kennedy

“I was the seventh of nine children. When you come from that far down you have to struggle to survive.”-Robert Kennedy

“The freeway of life proposes ends, but it does not prescribe means.”-Robert Kennedy

“I have told friends and supporters who are urging me to run that I would not oppose President Johnson under any foreseeable circumstances.”-Robert Kennedy

“We will find neither national purpose nor personal satisfaction in a mere continuation of economic progress, in an endless amassing of worldly goods. We cannot measure national spirit by the Dow Jones Average, nor national achievement by the Gross National Product.”-Robert Kennedy

“The Gross National Product includes the destruction of the redwoods and the death of Lake Superior. It grows with the production of napalm and missiles and nuclear warheads… It includes… the broadcasting of television programs which glorify violence to sell goods to our children.”-Robert Kennedy

“If I get to be president, what can I do anyway? With Congress and the press, what chance do I have to make basic changes?”-Robert Kennedy

“Everything that makes man’s life worthwhile – family, work, education, a place to rear one’s children and a place to rest one’s head – all this depends on the decisions of government; all can be swept away by a government which does not heed the demands of its people, and I mean all of its people.”-Robert Kennedy

“Even as my father grew up in Boston, Massachusetts, signs told him: ‘No Irish Need Apply.'”-Robert Kennedy

“We in the United States believe in the protection of minorities; we recognize the contributions that they can make and the leadership that they can provide; and we do not believe that any people – whether majority or minority, or individual human beings – are ‘expendable’ in the cause of theory or of policy.”-Robert Kennedy

“Martin Luther King dedicated his life to love and to justice between fellow human beings. He died in the cause of that effort.”-Robert Kennedy

“No one needs to tell me about the importance of the free press in a democratic society or about the essential role a newspaper can play in its community.”-Robert Kennedy

“When I was counsel for the Senate Rackets Committee, about 25% of the important leads which our committee developed came from newspapers. This increased my respect for those courageous newspapers which assisted us. It also caused me to look with wonderment at some of the newspapers that did not.”-Robert Kennedy

“The hardest problems of all in law enforcement are those involving a conflict of law and local customs. History has recorded many occasions when the moral sense of a nation produced judicial decisions, such as the 1954 decision in Brown v. Board of Education, which required difficult local adjustments.”-Robert Kennedy

“Where aspirations outstrip opportunities, law-abiding society becomes the victim. Attitudes of contempt toward the law are forged in this crucible and form the inner core of the beliefs of organized adult crime.”-Robert Kennedy

“It certainly should not surprise us that a young person without any real stake in a legitimate occupation or career may get into trouble more easily. Such persons readily accept the idea that they have been unjustly deprived of money, status, and opportunity.”-Robert Kennedy

“In the cases that come before the Department of Justice involving a wide range of unlawful activities, we see repeated evidence of family and community failures.”-Robert Kennedy

“Circumstances of crimes vary. So do motives. And so do prospects for rehabilitation. The number of imponderables makes it impossible to sentence by formula and still sentence justly.”-Robert Kennedy

“I believe indeterminate sentencing can be extremely useful, but I also believe that any such system should always take into consideration the special knowledge as to the facts in a case which only the trial judge possesses.”-Robert Kennedy

“I am deeply impressed with the gravity and wisdom with which most federal judges approach the responsibility of sentencing. It is a difficult, soul-searching task at best.”-Robert Kennedy

“I am ashamed to report that my father, who is 73, has never been beaten by any of his four sons in golf. We have all become resigned to the fact that he has determined that he won’t be beaten.”-Robert Kennedy

“The world of sports knows no religious, racial or political differences. Athletes, from whatever land they come, speak the same language. The lessons of competition are lessons for life.”-Robert Kennedy

“We must continue to prove to the world that we can provide a rising standard of living for all men without loss of civil rights or human dignity to any man.”-Robert Kennedy

“In the last analysis, our every right is only worth what our lawyer makes it worth.”-Robert Kennedy

“In government, our chief executives have been lawyers. The great majority of our cabinets and congresses are and have been men trained in the law. They have provided the leadership and the statecraft and the store of strength when it was needed.”-Robert Kennedy

“President Kennedy has named two Negroes to District Judgeships and appointed Thurgood Marshall to the United States Court of Appeals. When I came to the Department of Justice, there were only ten Negroes employed as lawyers; not a single Negro served as a United States Attorney – or ever had in the history of the country. That has been changed.”-Robert Kennedy

“Our generation was born during the turmoil following the First World War. That war marked the dividing line – at least for the Western World – between the comfortable security of the 19th century and the instability and flux of our own time.”-Robert Kennedy

“One of the great creative statesmen of our age was Franklin Roosevelt. He was creative precisely because he preferred experiment to ideology.”-Robert Kennedy

“The United States was born in revolution and nurtured by struggle. Throughout our history, the American people have befriended and supported all those who seek independence and a better way of life.”-Robert Kennedy

“Within the United States, we have put great emphasis upon political freedoms. Because it has been our experience that these freedoms can lead to others.”-Robert Kennedy

“Freedom possesses many meanings. It speaks not merely in terms of political and religious liberty but also in terms of economic and social progress.”-Robert Kennedy

“Communism everywhere has paid the price of rigidity and dogmatism. Freedom has the strength of compassion and flexibility. It has, above all, the strength of intellectual honesty.”-Robert Kennedy