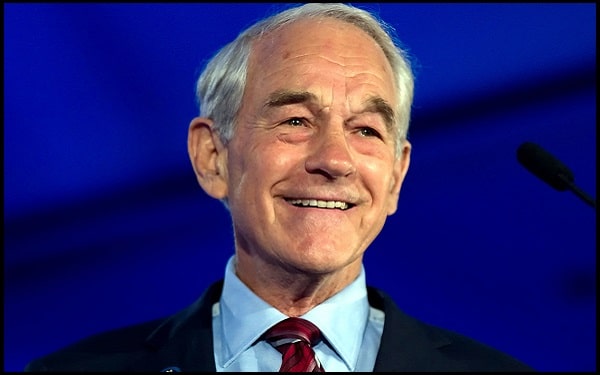 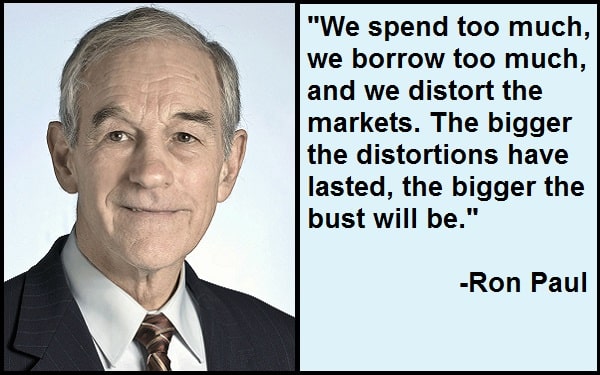 “The moral and constitutional obligations of our representatives in Washington are to protect our liberty, not coddle the world, precipitating no-win wars, while bringing bankruptcy and economic turmoil to our people.”-Ron Paul

“War is never economically beneficial except for those in position to profit from war expenditures.”-Ron Paul

“When one gets in bed with government, one must expect the diseases it spreads.”-Ron Paul

“The legitimate use of violence can only be that which is required in self-defense.”-Ron Paul

“You wanna get rid of drug crime in this country? Fine, let’s just get rid of all the drug laws.”-Ron Paul

“Capitalism should not be condemned since we haven’t had capitalism.”-Ron Paul

“The most important element of a free society, where individual rights are held in the highest esteem, is the rejection of the initiation of violence.”-Ron Paul

“In the time it will become clear to everyone that support for the policies of pre-emptive war and interventionist nation-building will have much greater significance than the removal of Saddam Hussein itself.”-Ron Paul

“If you like small government you need to work hard at having a strong national defense that is not so militant. Personal liberty is the purpose of government, to protect liberty – not to run your personal life, not to run the economy, and not to pretend that we can tell the world how they ought to live.”-Ron Paul

“What is not conservative about saying, ‘Don’t go to war unless we go to war properly with a full declaration of war and no other way?'”-Ron Paul

“There’s nothing wrong with being a Conservative and coming up with a Conservative belief in foreign policy where we have a strong national defense and we don’t go to war so carelessly.”-Ron Paul

“As recent as the year 2000 we won elections by saying we shouldn’t be the policemen of the world, and that we should not be nation-building. And its time we got those values back into this country.”-Ron Paul

“Another term for preventive war is aggressive war – starting wars because someday somebody might do something to us. That is not part of the American tradition.”-Ron Paul

“There is only one kind of freedom and that’s individual liberty. Our lives come from our creator and our liberty comes from our creator. It has nothing to do with the government granting it.”-Ron Paul

“Have you noticed the debt is exploding? And it’s not all because of Medicare.”-Ron Paul

“Prices are going up. Unemployment continues to go up. And we have not had the necessary correction for the financial bubble created by our Federal Reserve system.”-Ron Paul

“Well, I don’t think we should go to the moon. I think we maybe should send some politicians up there.”-Ron Paul

“I’d like to think of myself as the flavor of the decade.”-Ron Paul

“I had the privilege of practicing medicine in the early ’60s before we had any government. It worked rather well, and there was nobody on the street suffering from no medical care.”-Ron Paul

“Maybe we ought to consider a Golden Rule in foreign policy: Don’t do to other nations what we don’t want happening to us. We endlessly bomb these countries and then we wonder why they get upset with us?”-Ron Paul

“I would like to restore your right to drink raw milk anytime you like.”-Ron Paul

“You don’t quit because you happen to be behind. You want to see how you do. And who knows? Maybe somebody will stumble.”-Ron Paul

“During the last campaign, I knew what was happening. You know, they mocked me for my foreign policy and they laughed at my monetary policy. No more. No more.”-Ron Paul

“Believe me, the intellectual revolution is going on, and that has to come first before you see the political changes. That’s where I’m very optimistic.”-Ron Paul

“Aggression and forced redistribution of wealth have nothing to do with the teachings of the world’s great religions.”-Ron Paul

“Real patriotism is a willingness to challenge the government when it’s wrong.”-Ron Paul

“Why is it is claimed that if people won’t or can’t take care of their own needs, that people in government can do it for them?”-Ron Paul

“We have a government that purposely counterfeits and debases the currencies, and I believe that the alternative would be a competition. That means that anything that wants to substitute for the American dollar should be permitted.”-Ron Paul