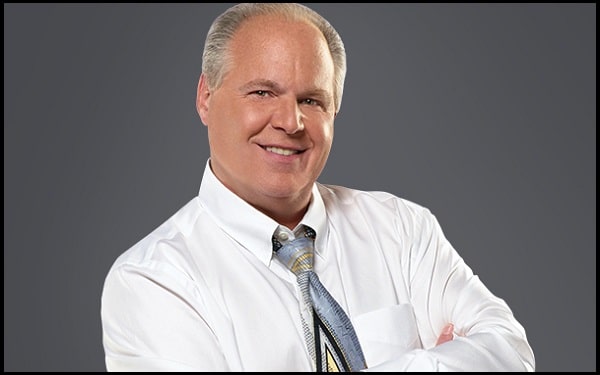 “The last thing they want is a revitalized economy now. I’m not saying the Democrats don’t want a strong economy. Don’t misunderstand. They just don’t want it now.”-Rush Limbaugh 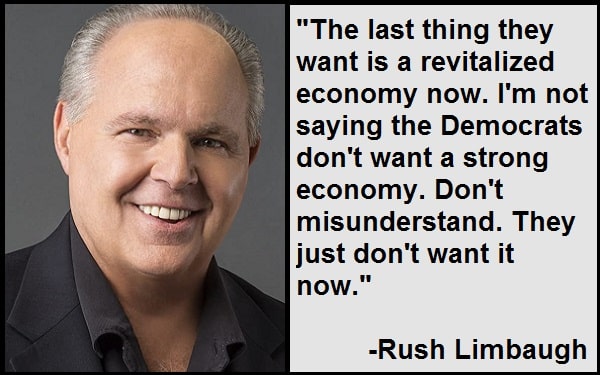 “Will some reporter, or some Republican on the Sunday shows, please ask why tax cuts raid the non-existent Social Security Trust Fund but all the Democrats’ new spending doesn’t? Will someone please ask that?”-Rush Limbaugh

“Enraging liberals is simply one of the more enjoyable side effects of my wisdom.”-Rush Limbaugh

“Do you know why there’s a Second Amendment? In case the government fails to follow the first one.”-Rush Limbaugh

“We can take this country back. All we need is to nominate the right candidate. It’s no more complicated than that.”-Rush Limbaugh

“There is one other business where the customer is always wrong and that’s the media.”-Rush Limbaugh

“The future is not Big Government. Self-serving politicians. Powerful bureaucrats. This has been tried, tested throughout history. The result has always been a disaster. President Obama, your agenda is not new. It’s not changing, and it’s not hope.”-Rush Limbaugh

“Nationalizing businesses, nationalizing banks, is not a solution for the democratic party, it’s the objective.”-Rush Limbaugh

“Obama is a statist. He’s an authoritarian. He doesn’t want to govern; he wants to rule.”-Rush Limbaugh

“Our nation was created in ways that allow human potential to prosper, and it created the greatest nation for people in the history of humanity. Now Obama is dismantling it because he has no appreciation for our greatness. In fact, he resents it. He blames this country for whatever evils he sees around the world.”-Rush Limbaugh

“The message that President Obama delivered in his speech at Notre Dame was: morality is immoral. Pro-life is the extremist position, not a moral position. Yet we should compromise and work to reduce abortions. Where’s the compromise between life and death – and why work to reduce the number of them occurring if there’s nothing wrong with them?”-Rush Limbaugh

“After the Republican Party did everything that Colin Powell says it needs to do to grow and nominated the very kind of candidate he wanted in 2008, what did Powell do? He endorsed Obama! So according to the Drive-Bys and David Gergen, Republicans should let somebody who campaigned and voted for Obama, tell us how to build our party.”-Rush Limbaugh

“When a nominee for the Supreme Court, one of the only nine-lifetime appointments, makes an overtly brazen racist comment about tens of millions of American citizens, we don’t need lectures. What we need to do is to confront her with what she said and what it says about her.”-Rush Limbaugh

“Obama and the Democrats are not focused on the moderates. They’re focused on getting their base out, and they’re trying to expand that base by forming sympathetic, empathetic alliances with the downtrodden, and there are a lot of downtrodden because Obama has made them that way via his policies.”-Rush Limbaugh

“Is it a coincidence that in 1998, Barack Obama talks about a majority coalition of welfare recipients and in 2012 we got a record number of Americans on food stamps while he’s president? I don’t think it’s a coincidence.”-Rush Limbaugh

“The Republicans need to work on registration and getting out their vote and their early voters and absentees. Grassroots stuff.”-Rush Limbaugh

“This is a frightening statistic. More people vote in ‘American Idol’ than in any US election.”-Rush Limbaugh

“That’s what liberalism is all about, is promoting incompetence on the basis it’s fair because people would be the best if they weren’t discriminated against.”-Rush Limbaugh

“Styrofoam and plastic milk jugs are biodegradable! Do you know what isn’t biodegradable? Paper!”-Rush Limbaugh

“When a poll is really, really out of whack with what I want to happen, I do have a tendency to disregard it.”-Rush Limbaugh

“The idea of going back to college scares me, and I didn’t even go. I went to college for one year, two semesters. If you add up the total time, I probably didn’t even go one semester.”-Rush Limbaugh

“There’s a void of leadership in a lot of Washington. I think one of the reasons why there’s so much angst across the country.”-Rush Limbaugh

“So much value has been lost in the housing market that people are now buying. If there’s any activity in the housing market, it’s because values have plummeted to such depths that the 47% can now afford to live in a government-purchased house or something like that.”-Rush Limbaugh

“Look, 85% percent of Democrats think the economy’s fine. What does that tell you about these people?”-Rush Limbaugh

“Do you know how old I am? I’m so old, I remember when Letterman used to be funny and it was presidents who were serious. That’s how old I am.”-Rush Limbaugh

“Who in the world wants to run a country where the new norm is one where there are no jobs?”-Rush Limbaugh

“That’s the definition of ‘success’ for the modern Democrat Party. As many people dependent on government as possible is the objective.”-Rush Limbaugh

“Reagan won because he was real. He believed in America. He told people he was gonna make it great again coming out of a disastrous four years of Jimmy Carter and Watergate before that.”-Rush Limbaugh

“The Obama camp, the White House, and the media all condemned Romney before they condemned the attacks. Obama thought it more worthwhile to hit Romney for what he was doing than the terrorists for what they did. Romney got hit first.”-Rush Limbaugh

“The welfare state is collapsing all around us. There are people that realize that we can’t go in this way, but I’m not sure how many people realize how close we are to the collapse of the U.S. financial system.”-Rush Limbaugh

“For the last five years, we have been presented with the idea that Barack Obama is superhuman. Barack Obama is unlike any of us or anyone else. And he isn’t. In fact, he’s much less achieved and much less accomplished than most who have gotten half as far as he has, and I think maybe what we saw was the best.”-Rush Limbaugh

“What about feeling sorry for those who pay the taxes? Those who are people that no one feels sorry for. They are asked to give and give until they have no more to give. And when they say ‘enough,’ they are called selfish.”-Rush Limbaugh

“Young people, those who think they’re experts in science, there’s no doubt. They just believe it, and so there has to be an explanation – and whatever man is doing has caused the jet stream to slow down, and that is permitting the polar vortex.”-Rush Limbaugh

“Liberal Democrats are inexorably opposed to tax cuts, because tax cuts give people more power, and take away from the role of government.”-Rush Limbaugh