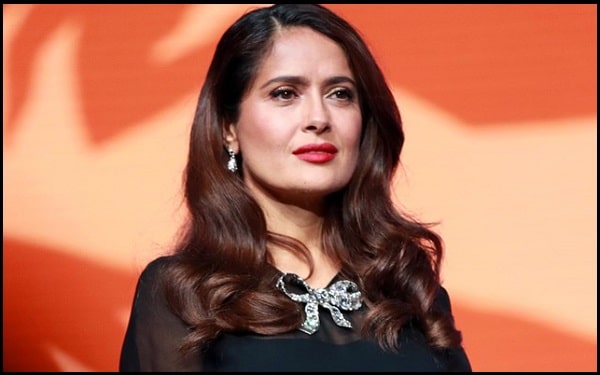 Salma Hayek Quotes:- Salma Hayek (born September 2, 1966) is a Mexican and American film actress and producer. She began her career in Mexico starring in the telenovela Teresa and starred in the film El Callejón de Los Milagros (Miracle Alley) for which she was nominated for an Ariel Award.

“Some men have a silly theory about beautiful women – that somewhere along the line they’ll turn into a monster. That movie gave them a chance to watch it happen.”-Salma Hayek 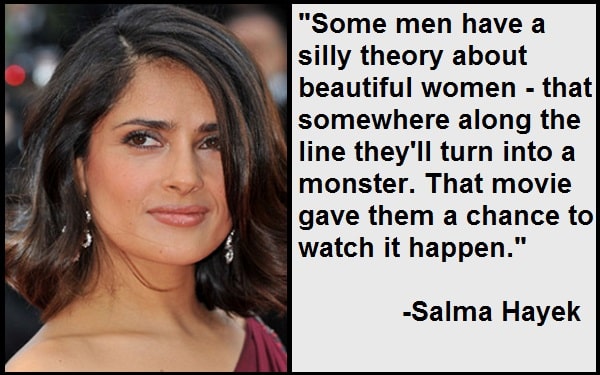 “If you give me any problem in America I can trace it down to domestic violence. It is the cradle of most of the problems, economic, psychological, educational.”-Salma Hayek

“My new movie, Fools Rush In, is a romantic comedy and the girl I play in that is very warm, very sweet.”-Salma Hayek

“So you have to keep waiting and then they give you the script and it’s terrible. Then you have to go to the rewrite and they’re very upset because you didn’t like it. I went through that for seven years.”-Salma Hayek

“My heart has been stolen too – but I’ve gone and got it back every single time!”-Salma Hayek

“Every woman who thinks she is the only victim of violence has to know that there are many more.”-Salma Hayek

“I’ve stolen a couple of hearts and they are in my private collection!”-Salma Hayek

“No woman has to be a victim of physical abuse. Women have to feel like they are not alone.”-Salma Hayek

“People often say that ‘beauty is in the eye of the beholder,’ and I say that the most liberating thing about beauty is realizing that you are the beholder. This empowers us to find beauty in places where others have not dared to look, including inside ourselves.”-Salma Hayek

“What works in a relationship of very public people is not making the relationship public – keeping it as personal as it can be. It’s the only way it is real.”-Salma Hayek

“If I go on a diet and work out, I’m always in a bad mood. I’d rather be a little heavier but nice.”-Salma Hayek

“Don’t try to dress like me or wear your hair like mine. Find your own style.”-Salma Hayek

“You can be a thousand different women. It’s your choice which one you want to be. It’s about freedom and sovereignty. You celebrate who you are. You say, ‘This is my kingdom.'”-Salma Hayek

“Do you know how macho boys get when they’re all together? Well, the set of ‘Desperado’ was like that. They were all trying to put me down, saying, ‘Bring on the stuntwoman, Salma can’t do that.’ But I did everything.”-Salma Hayek

“I work hard, I make my own living and I love it. I like having financial independence.”-Salma Hayek

“I’ll tell you, there is nothing better in life than being a late bloomer. I believe that success can happen at any time and at any age.”-Salma Hayek

“I don’t ever want to have to depend on anyone completely.”-Salma Hayek

“You can have a spiritual awakening and discover a new side of you at any age. And best of all, love can happen at any age. Life can just start to get exciting when you’re in your 40s and 50s. You have to believe that.”-Salma Hayek

“I’m not a skinny girl. I push it. I’m at the limit of chubbiness at all times, but I’m happy at all times.”-Salma Hayek

“I don’t have stamina in exercise… but I have it in life.”-Salma Hayek

“Everybody has a weakness. Mine is food.”-Salma Hayek

“I think it’s important that kids have responsibilities and understand the value of things, but I think it’s great I get to travel the world with my daughter.”-Salma Hayek

“At one point in my life, I was very involved with social causes. I’m still involved, but now I have a family and it’s important to me.”-Salma Hayek

“Find your own style. Don’t spend your savings trying to be someone else. You’re not more important, smarter, or prettier because you wear a designer dress.”-Salma Hayek

“I don’t believe in the so-called Latino explosion when it comes to movies. Jennifer Lopez doesn’t have an accent. She grew up in New York speaking English, not Spanish. Her success is very important because she represents a different culture, but it doesn’t help me.”-Salma Hayek

“My English was limited to vacationing and not really engaging with Americans. I knew ‘shopping’ and ‘eating’ English – I could say ‘blue sweater,’ ‘creme brulee,’ and ‘Caesar salad,’ – so I came here thinking I spoke English.”-Salma Hayek

“They thought I was crazy in Mexico when I said, ‘I’m going to Hollywood.’ Nobody thought I could make it.”-Salma Hayek

“People always underestimate me. But if you stick around long enough, act out of conviction, and try to be honorable in everything you do, good things will come to you.”-Salma Hayek

“What once was an expression of who I was – acting – also became my hiding place.”-Salma Hayek

“The truth is, I just don’t have the drive to be the prettiest and the thinnest. I can be happy for other people for their beauty.”-Salma Hayek

“If you look at any other group of people suffering injustice, women are always in the worst situation within that group.”-Salma Hayek

“I like being a mother. For some people, it’s so much work that it can be a burden. But it’s not for me, maybe because I had my daughter, Valentina, later on in life, at 41.”-Salma Hayek

“Being a mother is more exhausting than working, and sometimes I push myself too hard and burn myself out. I can appreciate how exhausting it must be for women who have to do everything themselves all the time.”-Salma Hayek

“Beauty products always cheer me up and give me hope. If it makes you feel pretty, why not?”-Salma Hayek

“If you’re feeling blue, lock yourself in a room, stand in front of a mirror, and dance – and laugh at yourself and be sexy. Dance the silliest and ugliest you’ve ever danced. Make fun of yourself and try to recover your sense of humor.”-Salma Hayek

“If you’re paralyzing your face in your 20s and 30s, you’re not exercising the muscles that give it strength. My feeling is, laugh, cry, move your face.”-Salma Hayek

“There were many times when I had to emotionally come to terms with the fact that maybe I wasn’t ever going to get married. And I started getting comfortable with that.”-Salma Hayek

“Somehow I am really relaxed within the chaos of having a baby – and anyone who’s a mother knows it’s very hard to relax because there is so much to do and worry about!”-Salma Hayek

“If it wasn’t because of my high heels, I would still be in Coatzacoalcos with 10 children.”-Salma Hayek

“I think that a lot of women that know they’re going to be part of history somehow decide to have a character to be remembered by.”-Salma Hayek

“If you love food and you love red wine and they put you in France, you’re in a good place and you’re in a bad place at the same time. You have to weigh yourself every day, and you have to have an alarming number. When you get to that number, you have to start putting it in reverse.”-Salma Hayek

“I think if I was not in love, I would probably let myself go faster. Love gives me the vanity to continue.”-Salma Hayek

“When I feel stressed, I turn to food for comfort, but I don’t like to diet and I’m not good at it.”-Salma Hayek

“After doing a juice cleanse, I’m motivated to eat healthier and not emotionally. Cleansing is like my meditation. It makes me stop, focus and think about what I’m putting into my body. I’m making a commitment to my health and hitting the reset button.”-Salma Hayek

“I will not have Botox. You know why? Because I eat! I eat the fat, I eat the vegetable, I eat everything. If you exercise and you don’t eat enough, it takes its toll on the skin.”-Salma Hayek

“I believe eating well, and with people you love, is about feeding your body, heart, and soul – I used juicing to ensure I covered my nutritional bases every day, and as a tool to restore inner balance if my body needed a break from too much indulgence.”-Salma Hayek

“Every unwanted animal ends up on my farm: alpacas and horses and dogs and cats and chickens and ducks and parrots and fish and guinea pigs.”-Salma Hayek

“I had to endure the worst time of all in terms of racial discrimination in Hollywood when I first started out. It was inconceivable to American directors and producers that a Mexican woman could have a lead role.”-Salma Hayek

“Hollywood has definitely grown, in embracing the inclusion of Latinos in the world, because, for some time, we didn’t exist. We were not part of any stories.”-Salma Hayek

“I love family films. Of course, as a mother who has to watch so many movies, you really appreciate it when somebody makes a film that is for everybody – family entertainment that’s really for the family, where everyone has a good time.”-Salma Hayek

“My accent was horrible. In Mexico, nobody says, ‘You speak English with a good accent.’ You either speak English, or you don’t: As long as you can communicate, no one cares.”-Salma Hayek