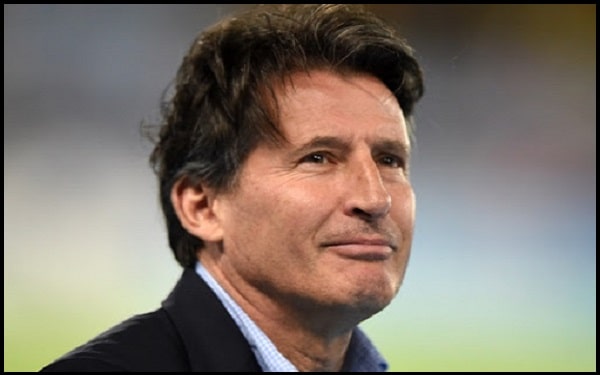 Sebastian Coe Quotes:- Sebastian Coe (born 29 September 1956) is a British politician and former track and field athlete. As a middle-distance runner, Coe won four Olympic medals, including the 1500 meters gold medal at the Olympic Games in 1980 and 1984.

“Our success in Singapore was a Herculean effort by the whole team. Now I am determined to deliver on all we promised. I will be watching like a hawk.”-Sebastian Coe 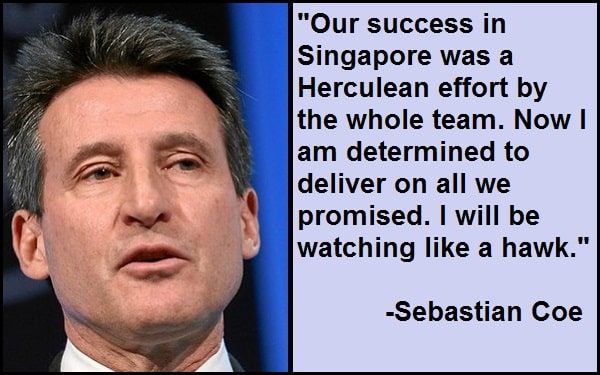 “There may be problems we still need to tease out, but we will leave no stone unturned in our bid to make London the host city.”-Sebastian Coe

“The great thing about athletics is that it’s like poker sometimes: you know what’s in your hand, and it may be a load of rubbish, but you’ve got to keep up the front.”-Sebastian Coe

“Everybody recognizes that giving young people a competitive outlet through sport is a very good thing.”-Sebastian Coe

“The biggest fragility in a project is often just the inability to be able to explain to people why you are doing it, and when you’re going to do it, and what’s going to happen.”-Sebastian Coe

“I will go to my grave believing that participation is best driven by the well-stocked shop window.”-Sebastian Coe

“When I moved to Sheffield and went to a secondary modern in the Seventies, there were certain challenges: if you’ve got a name like Sebastian, you either learn to fight or to run.”-Sebastian Coe

“I’m such an odd mix of things. My grandfather was Indian: I’ve got more family living in India than I do in the U.K. My old man was in East London. I was brought up in Yorkshire. My great-grandfather was Irish.”-Sebastian Coe

“There’s a difference between hurting when you lose and being a bad loser. You don’t compete at the highest level of sport to feel comfortable about losing, but you behave in a civil way when it goes wrong because that is the flip side.”-Sebastian Coe

“Getting the Games for London has been the fulfillment of a dream. It is one that I truly believe can change the lives of hundreds of thousands of young people for the better. But in the end, nothing can quite compare with winning your first Olympic gold medal.”-Sebastian Coe

“Ask me what makes a champion runner, and I will tell you it helps to have the great good sense to choose your parents carefully.”-Sebastian Coe

“There is nothing so marginal as a party that has been in power for 18 years and slides into opposition. You influence nothing.”-Sebastian Coe

“Vision is a romantic thing. We have got into ‘talent identification’. I am much more interested in passion – finding people who are really excited about doing something.”-Sebastian Coe

“During my first Olympics in 1980, at the age of 23, I was physically in great condition but mentally too inexperienced to cope comfortably in the pressure cooker of an Olympic year.”-Sebastian Coe

“I can remember the day I decided I would retire from competitive athletics as vividly as if it were yesterday.”-Sebastian Coe

“In 1981, I spoke at the Olympic Congress. I was scandalized that I was the first athlete to be given that chance. But I made the most of it.”-Sebastian Coe

“Nobody ever becomes an expert parent. But I think good parenting is about consistency. It’s about being there at big moments, but it’s also just the consistency of decision making. And it’s routine.”-Sebastian Coe

“Good running is the ability to have a very well defined on-board computer. The ability to judge distances when running in traffic.”-Sebastian Coe

“The Olympics are a world apart from racing for a record. You put out of your mind pretty much what anyone else doing in the race.”-Sebastian Coe

“I still run every other day. Longer at weekends. I probably do 35 miles a week.”-Sebastian Coe

“My mother was Indian, brought up in Delhi. My grandparents were born in Bow and Poplar.”-Sebastian Coe

“I’m probably one of the few people who can say I did all three types of state sector schooling.”-Sebastian Coe

“I wouldn’t have raced a horse. But you’ll then throw back at me that Jesse Owens raced against a horse, and he’s one of my heroes, so I’m not going to say it was a silly stunt. I know too much about horses. They’re highly unreliable, and they’ve got brains the size of golf balls.”-Sebastian Coe

“When the subsidies are going out there to fund arts, I’d like to see jazz given a better shake of the dice. It attracts as many people as opera does, but not the subsidies.”-Sebastian Coe

“Inspirational leaders need to have a winning mentality in order to inspire respect. It is hard to trust in the leadership of someone who is half-hearted about their purpose, or only sporadic in focus or enthusiasm.”-Sebastian Coe

“I have always been very good at being able to structure my time. My mother had a huge influence on me. My dad was my coach. He was a hugely influential figure.”-Sebastian Coe

“You hope all good athletes run on the balls of their feet. You don’t want them coming down heel first. The perfect style is the foot to come down with slight supination and on a tilt to the outside.”-Sebastian Coe

“I’m a Chelsea season-ticket holder, and I’ve supported them for 37 years, so any judgment of Manchester United by me is seen as biased.”-Sebastian Coe

“I can be a bit impatient sometimes. If I’m really focusing on something, I can expect everybody to move at the same pace, and that’s probably not massively endearing.”-Sebastian Coe