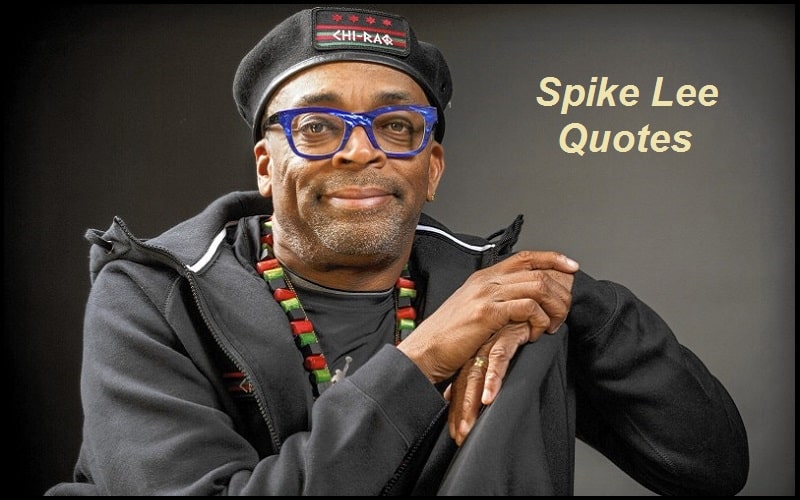 Spike Lee Quotes:- Spike Lee (born March 20, 1957) is an American film director, producer, writer, and actor. His production company, 40 Acres and a Mule Filmworks, has produced more than 35 films since 1983.

He made his directorial debut with She’s Gotta Have It. He has since written and directed such films as Do the Right Thing (1989), Jungle Fever, Malcolm X, He Got Game, The Original Kings of Comedy, 25th Hour, Inside Man, Chi-Raq, and BlacKkKlansman. Lee also took starring roles in ten of his films.

“I’m just trying to tell a good story and make thought-provoking, entertaining films. I just try and draw upon the great culture we have as a people, from music, novels, the streets.”-Spike Lee 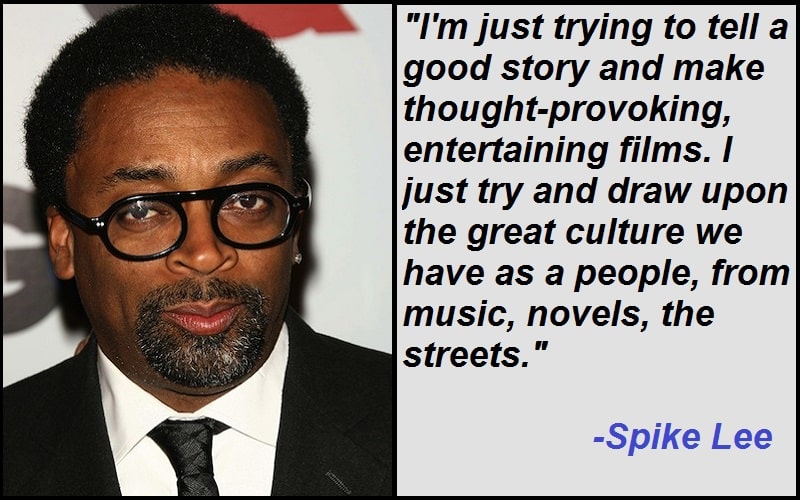 “Don’t think that because you haven’t heard from me for a while that I went to sleep. I am still here, like a spirit roaming the night. Thirsty, hungry, seldom stopping to rest.”-Spike Lee

“I think it is very important that films make people look at what they’ve forgotten.”-Spike Lee

“I’m riding my man Obama. I think he’s a visionary. Actually, Barack told me the first date he took Michelle to was ‘Do the Right Thing.’ I said, Thank God I made it. Otherwise, you would have taken her to ‘Soul Man.’ Michelle would have been like ‘What’s wrong with this brother?'”-Spike Lee

“It has been my observation that parents kill more dreams than anybody.”-Spike Lee

“‘Red Hook Summer’ is another chapter in my chronicles of Brooklyn.”-Spike Lee

“I’d like to state that “-Spike Lee is not saying that African American culture is just for black people alone to enjoy and cherish. Culture is for everybody.”-Spike Lee

“I don’t like acting; not in front of the camera.”-Spike Lee

“I think people who have faults are a lot more interesting than people who are perfect.”-Spike Lee

“Violence is a part of America. I don’t want to single out rap music. Let’s be honest. America’s the most violent country in the history of the world, that’s just the way it is. We’re all affected by it.”-Spike Lee

“I respect the audience’s intelligence a lot, and that’s why I don’t try to go for the lowest common denominator.”-Spike Lee

“What’s the difference between Hollywood characters and my characters? Mine are real.”-Spike Lee

“There’s a lot of Americans, black and white, who think that we’ve arrived where we need to be and nothing else needs to be done and affirmative action needs to be dismantled.”-Spike Lee

“All directors are storytellers, so the motivation was to tell the story I wanted to tell. That’s what I love.”-Spike Lee

“I live in New York City, the stories of my films take place in New York; I’m a New York filmmaker.”-Spike Lee

“Right now a lot of people are still choosing to go to Toronto instead of shooting in New York City, something I haven’t done and something I hope I’ll never have to do.”-Spike Lee

“A lot of times you get credit for stuff in your movies you didn’t intend to be there.”-Spike Lee

“I think the best actors in the world are here in New York City. And this city is just so vibrant the energy is just phenomenal. Great crews here. All the technicians, all the artists that work in this industry. I’ve just been very happy with the body that we’ve been able to do, especially those films we shot here in New York City.”-Spike Lee

“A lot of times, we censor ourselves before the censor even gets there.”-Spike Lee

“I think it would be very boring dramatically to have a film where everybody was a lawyer or doctor and had no faults. To me, the most important thing is to be truthful.”-Spike Lee

“25th Hour,’ like a lot of my films, takes place in New York City. I’ve been very fortunate to make films in the city that I live in. I mean, it’s great going home at night instead of being on location.”-Spike Lee

“The truth is I’ve been doing Kickstarter before there was Kickstarter; there was no Internet. Social Media was writing letters, making phone calls, beating the bushes.”-Spike Lee

“Making films has got to be one of the hardest endeavors known to humankind.”-Spike Lee

“It comes down to this: black people were stripped of our identities when we were brought here, and it’s been a quest since then to define who we are.”-Spike Lee

“Do the Right Thing’ was my first union film. I looked at the rosters, and for the most part, it was white males. Especially the Teamsters. So we had some conversations.”-Spike Lee

“I knew I was never going to play professional sport, but I loved playing and I went to all the games I could afford to.”-Spike Lee

“I like to work with the same people when I can, and you want to get people with the same interests that you have, and the same aesthetic.”-Spike Lee

“I’m blessed, I can afford to send my children to private school.”-Spike Lee

“I think that anyone who lives in New York, who’s lived here, who’s spent any time here, knows that it’s basically a love-hate relationship, you might say. Even though I still think it’s the greatest city in the world and I wouldn’t live anywhere else, there’re still things about it one doesn’t like. The love far outweighs the negative.”-Spike Lee

“Everything I do is always scrutinized. But that’s all I’ll say about that.”-Spike Lee

“We grew up in a very creative environment and were exposed to the arts at a very young age, so it’s not a surprise that all of us are in some form of the arts.”-Spike Lee

“My cousin Malcolm Lee is also a filmmaker.”-Spike Lee

“I get offered to do stuff where the money’s nice but it’s not something I want to do – I get offered a lot of commercials too.”-Spike Lee

“I always give the example, if you turn on the radio today, black radio, Lenny Kravitz is not black. Bob Marley wasn’t black: in the beginning, only white college stations played Bob Marley.”-Spike Lee

“There’s an unwritten law that you cannot have a Jewish character in a film who isn’t 100 percent perfect, or you’re labeled anti-Semitic.”-Spike Lee

“Since the days of slavery, if you were a good singer or dancer, it was your job to perform for the master after dinner.”-Spike Lee

“Any time you talk about the look of the film, it’s not just the director and the director of photography. You have to include the costume designer and the production designer.”-Spike Lee

“Do the Right Thing’ was like the first film where I really felt comfortable working with actors.”-Spike Lee

“People of color have a constant frustration of not being represented or being misrepresented, and these images go around the world.”-Spike Lee

“First of all, what in this world does not revolve around money? But money is a big part of the film, unlike a lot of other art forms.”-Spike Lee

“And one thing Hollywood does well is sequels.”-Spike Lee

“I tend to favor films that have multiple plots and storylines, multiple characters and ensemble pieces.”-Spike Lee

“I don’t think I’m a total pessimist, so I think you can find hope in all my films.”-Spike Lee

“People think I’m this angry black man walking around in a constant state of rage.”-Spike Lee

“Amongst black people, you have always heard it said that once a black man reaches a certain level, especially if you are an entertainer, you get a white trophy woman. I didn’t make that up.”-Spike Lee

“She’s Gotta Have It’ was shot in twelve days and two six-day weeks.”-Spike Lee

“People sometimes forget all the films that we’ve done. They remember the likes of ‘Malcolm X’ and ‘Do the Right Thing.’ But I’ve been working since 1986. From the beginning, I was determined to not just be a flash in the pan. I’ve got to keep up with Woody Allen. He’s lapping me.”-Spike Lee

“I’m very careful about how I portray violence in my films. I do believe that violence, especially violent video games, is not a good thing for young kids.”-Spike Lee

“Mike Tyson is the most complex person I’ve ever met in my life. I’ve known Mike since 1986. We’re both from Brooklyn. I didn’t know him growing up, but once he became heavyweight champion, I knew him then.”-Spike Lee

“She’s Gotta Have It’ and ‘School Daze,’ I really didn’t know what I was doing. And the biggest indicator of that was the acting. ‘Do the Right Thing’ was like the first film where I really felt comfortable working with actors.”-Spike Lee