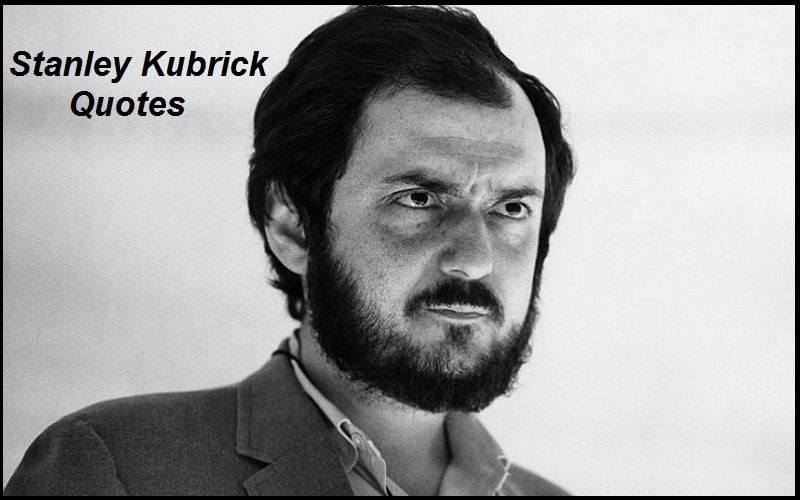 Stanley Kubrick Quotes:- Stanley Kubrick (July 26, 1928 – March 7, 1999) was an American film director, screenwriter, and producer. He is frequently cited as one of the most influential filmmakers in cinematic history.

His films, which are mostly adaptations of novels or short stories, cover a wide range of genres and are noted for their realism, dark humor, unique cinematography, extensive set designs, and evocative use of music.

“A film is – or should be – more like music than like fiction. It should be a progression of moods and feelings. The theme, what’s behind the emotion, the meaning, all that comes later.”-Stanley Kubrick

“You’re an idealist, and I pity you as I would the village idiot.”–Stanley Kubrick

“Writing, of course, is writing, acting comes from the theater, and cinematography comes from photography. Editing is unique to film. You can see something from different points of view almost simultaneously, and it creates a new experience.”-Stanley Kubrick

“What do you take me for? A fourteen karat sucker?”-Stanley Kubrick

“Art consists of reshaping life, but it does not create life nor cause life.”-Stanley Kubrick

“When you’re making a film, you have to make most of your decisions on the run, and there is a tendency to always shoot from the hip.”-Stanley Kubrick

“When a man cannot choose, he ceases to be a man.”-Stanley Kubrick

“The screen is a magic medium. It has such power that it can retain interest as it conveys emotions and moods that no other art form can hope to tackle.”-Stanley Kubrick

“Perhaps it sounds ridiculous, but the best thing that young filmmakers should do is to get hold of a camera and some film and make a movie of any kind at all.”-Stanley Kubrick

“It takes more discipline than you might imagine thinking, even for thirty seconds, in the noisy, confusing, high-pressure atmosphere of a film set. But a few seconds’ thought can often prevent a serious mistake being made about something that looks good at first glance.”-Stanley Kubrick

“You sit at the board and suddenly your heart leaps. Your hand trembles to pick up the piece and move it. But what chess teaches you is that you must sit there calmly and think about whether it’s really a good idea and whether there are other better ideas.”-Stanley Kubrick

“Anyone who has ever been privileged to direct a film also knows that, although it can be like trying to write ‘War and Peace’ in a bumper car in an amusement park when you finally get it right, there are not many joys in life that can equal the feeling.”-Stanley Kubrick

“It’s a mistake to confuse pity with love.”-Stanley Kubrick

“I never learned anything at all in school and didn’t read a book for pleasure until I was 19 years old.”-Stanley Kubrick

“If you can talk brilliantly about a problem, it can create the consoling illusion that it has been mastered.”-Stanley Kubrick

“A filmmaker has almost the same freedom as a novelist has when he buys himself some paper.”-Stanley Kubrick

“Among a great many other things that chess teaches you is to control the initial excitement you feel when you see something that looks good. It trains you to think before grabbing and to think just as objectively when you’re in trouble.”-Stanley Kubrick

“I am afraid of airplanes. I’ve been able to avoid flying for some time, but I suppose, if I had to, I would. Perhaps it’s a case of a little knowledge being a dangerous thing. At one time, I had a pilot’s license and 160 hours of solo time on single-engine light aircraft. Unfortunately, all that seemed to do was make me mistrust large airplanes.”-Stanley Kubrick

“Part of my problem is that I cannot dispel the myths that have somehow accumulated over the years. Somebody writes something, it’s completely off the wall, but it gets filed and repeated until everyone believes it. For instance, I’ve read that I wear a football helmet in the car.”-Stanley Kubrick

“Any time you take a chance you better be sure the rewards are worth the risk because they can put you away just as fast for a ten dollar heist as they can for a million-dollar job.”-Stanley Kubrick

“There are few things more fundamentally encouraging and stimulating than seeing someone else die.”-Stanley Kubrick

“If it can be written, or thought, it can be filmed.”-Stanley Kubrick

“Here’s to five miserable months on the wagon and the irreparable harm that it’s caused me.”-Stanley Kubrick

“Because I direct films, I have to live in a major English-speaking production center. That narrows it down to three places: Los Angeles, New York, and London. I like New York, but it’s inferior to London as a production center. Hollywood is best, but I don’t like living there.”-Stanley Kubrick