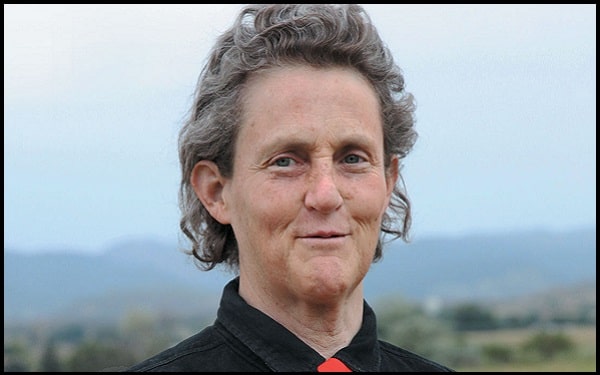 Temple Grandin Quotes:- Temple Grandin (born August 29, 1947) is an American professor of animal science at Colorado State University, consultant to the livestock industry on animal behavior, and autism spokesperson. She is one of the first individuals on the autism spectrum to document the insights she gained from her personal experience of autism.

“Research has shown that a barren environment is much more damaging to baby animals than it is to adult animals. It does not hurt the adult animals the same way it damages babies.”-Temple Grandin 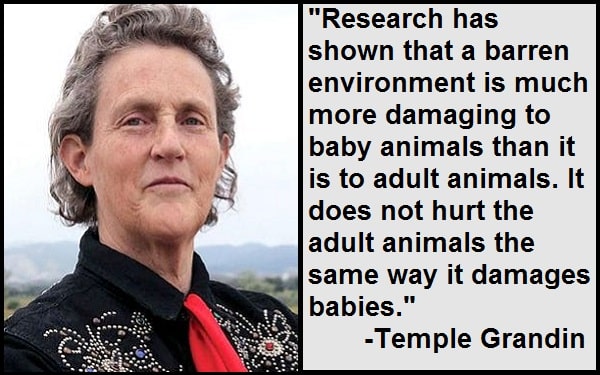 “I am also a believer in an integrated treatment approach to autism.”-Temple Grandin

“One of my sensory problems was hearing sensitivity, where certain loud noises, such as a school bell, hurt my ears. It sounded like a dentist drill going through my ears.”-Temple Grandin

“A treatment method or an educational method that will work for one child may not work for another child. The one common denominator for all of the young children is that early intervention does work, and it seems to improve the prognosis.”-Temple Grandin

“Some autistic children cannot stand the sound of certain voices. I have come across cases where teachers tell me that certain children have problems with their voice or another person’s voice. This problem tends to be related to high-pitched ladies’ voices.”-Temple Grandin

“I cannot emphasize enough the importance of a good teacher.”-Temple Grandin

“Some teachers just have a knack for working with autistic children. Other teachers do not have it.”-Temple Grandin

“And while we are on the subject of medication you always need to look at risk versus benefit.”-Temple Grandin

“The pressure is calming to the nervous system.”-Temple Grandin

“The squeeze machine is not going to cure anybody, but it may help them relax, and a relaxed person will usually have better behavior.”-Temple Grandin

“As you may know, some of the stereotyped behaviors exhibited by autistic children are also found in zoo animals who are raised in a barren environment.”-Temple Grandin

“My life is basically my work.”-Temple Grandin

“If I did not have my work, I would not have any life.”-Temple Grandin

“I’m a visual thinker, not a language-based thinker. My brain is like Google Images.”-Temple Grandin

“Who do you think made the first stone spears? The Asperger guy. If you were to get rid of all the autism genetics, there would be no more Silicon Valley.”-Temple Grandin

“What I’ve tried to do is combine both my personal experiences with scientific research. I like to cross the divide between the personal world and the scientific world.”-Temple Grandin

“Language for me narrates the pictures in my mind. When I work on designing livestock equipment I can test run that equipment in my head like 3-D virtual reality. In fact, when I was in college I used to think that everybody was able to do that.”-Temple Grandin

“I think that autistic brains tend to be specialized brains. Autistic people tend to be less social. It takes a ton of processor space in the brain to have all the social circuits.”-Temple Grandin

“Autism is a neurological disorder. It’s not caused by bad parenting. It’s caused by, you know, abnormal development in the brain. The emotional circuits in the brain are abnormal. And there also are differences in the white matter, which is the brain’s computer cables that hook up the different brain departments.”-Temple Grandin

“I’m a visual thinker, really bad at algebra. There are others that are a pattern thinker. These are the music and math minds. They think in patterns instead of pictures. Then there’s another type that’s not a visual thinker at all, and they’re the ones that memorize all of the sports statistics, all of the weather statistics.”-Temple Grandin

“Normal people have an incredible lack of empathy. They have good emotional empathy, but they don’t have much empathy for the autistic kid who is screaming at the baseball game because he can’t stand the sensory overload. Or the autistic kid having a meltdown in the school cafeteria because there’s too much stimulation.”-Temple Grandin

“You have got to keep autistic children engaged with the world. You cannot let them tune out.”-Temple Grandin

“If you have autism in the family history, you still vaccinate. Delay it a bit, space them out.”-Temple Grandin

“My grandfather was an engineer who invented the automatic pilot for airplanes.”-Temple Grandin

“There tends to be a lot of autism around the tech centers… when you concentrate the geeks, you’re concentrating the autism genetics.”-Temple Grandin

“I get satisfaction out of seeing stuff that makes real change in the real world. We need a lot more of that and a lot less abstract stuff.”-Temple Grandin

“The most important thing people did for me was to expose me to new things.”-Temple Grandin

“I was so afraid to go out west to my aunt’s ranch. But the only choice my mother gave me was to go for two weeks or all summer. I wound up staying all summer. And that’s where I learned about cattle. I could relate to their behavior, their fears.”-Temple Grandin

“Language for me narrates the pictures in my mind.”-Temple Grandin

“My mind works like Google for images. You put in a keyword; it brings up pictures.”-Temple Grandin

“When I was in high school and college, I thought everybody could think in pictures. And my first inkling to my thinking was even different was when I was in college and I read an article about, you know, some scientists said that the caveman could not have designed tools until they had language.”-Temple Grandin

“I’ve always thought of myself as a cattle-handling specialist, a college professor first; autism is secondary.”-Temple Grandin

“From a scientific standpoint, Aspergers and autism are one syndrome. Aspergers is part of the autism spectrum, not a separate disorder.”-Temple Grandin

“When I was younger, I was looking for this magic meaning of life.”-Temple Grandin

“Some people with autism who don’t talk, all they hear are vowel sounds. Like if I said ‘cup,’ they might just hear ‘uh.'”-Temple Grandin

“One big question that’s come up is: Has autism increased on the mild side of things? I don’t think so – they’ve always been here. Some of this is increased detection.”-Temple Grandin

“I’ve worked with tons of people that I know who are on the spectrum – but now I think severe autism has really increased.”-Temple Grandin

“Autistic children are very difficult to take care of, especially severely autistic ones. When I was 4, I had almost no language; when I was 3, I had none at all.”-Temple Grandin

“Computerized medical records will enable a statistical analysis to be used to determine which treatments are most effective.”-Temple Grandin

“Costs for liability insurance are higher than costs for many procedures. There is a need to reform liability laws to stop out-of-control health care costs.”-Temple Grandin

“I was fascinated with optical illusions.”-Temple Grandin

“I think sometimes parents and teachers fail to stretch kids. My mother had a very good sense of how to stretch me just slightly outside my comfort zone.”-Temple Grandin

“I think the core criterion is the social awkwardness, but the sensory issues are a serious problem in many, many cases of autism, and they make it impossible to operate in the environment where you’re supposed to be social.”-Temple Grandin

“My mind sort of works like a search engine. You ask me something, and I start seeing pictures.”-Temple Grandin