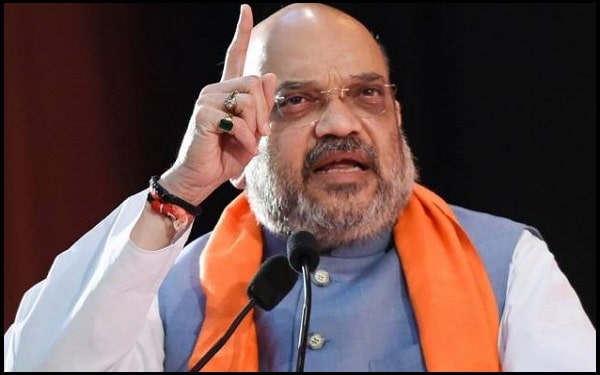 Amit Shah Quotes:- Amit Anil Chandra Shah (born 22 October 1964) is an Indian politician serving as Minister of Home Affairs who has served as President of the Bharatiya Janata Party (BJP) from 2014 to 2020.

“I believe the BJP should respect each and every political party, and the BJP should evaluate and consider each party’s relevance in Indian politics and then formulate its own strategy.”-Amit Shah 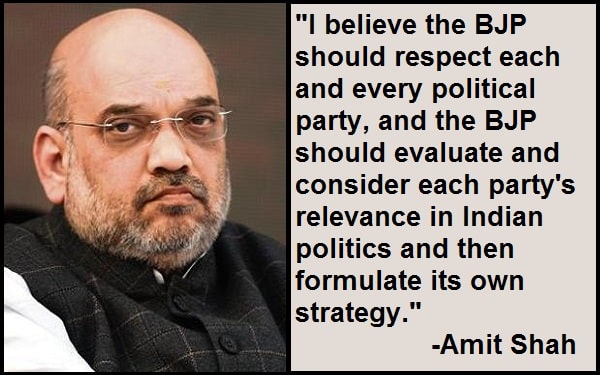 “The BJP doesn’t believe in vote-bank politics. We believe India is above everything.”-Amit Shah

“Kejriwal’s only mantra is to tell lies and talk forcefully and repeatedly, but Delhi cannot develop with telling lies.”-Amit Shah

“After forming the government in 2019, the BJP will undertake a nationwide identification of illegal infiltrators living in the country.”-Amit Shah

“Millions of infiltrators have entered our country and are eating the country like termites. Should we not uproot them?”-Amit Shah

“I have got popularity. BJP workers have given me unmatched love. They admire me so much that I feel humbled.”-Amit Shah

“I have never done anything which I feel guilty about or wish I had not done it.”-Amit Shah

“From an organization’s point of view, I want the BJP to be the bright national political party in all the states of India and having an impact on social life.”-Amit Shah

“What is more important than your son? Still, we send our sons to fight at the borders of the nation. Similarly, for the sake of the development of our country, we have to give away our land. Not an inch of land that the government will acquire will go into the hands of industrialists.”-Amit Shah

“In India, given a choice, nobody ever wants to part with the land.”-Amit Shah

“It is the daydreaming of some people who live in a make-believe world who think you can make roads, hospitals, and railways without any social impact!”-Amit Shah

“No law is permanent or steady. The law is not made of steel. The law is made by Parliament. It goes to the people, to the ground. A lot of many suggestions come once it is implemented. So many laws have been amended after receiving people’s suggestions.”-Amit Shah

“Irrespective of economic theories, we will take decisions in the larger interest of the poor people.”-Amit Shah

“Modi is marching forward on the basis of the BJP’s philosophy.”-Amit Shah

“In Modiji, we have given India a ‘mazboot’ leader under whom India has emerged among the top economies.”-Amit Shah

“When people speak of BJP being an ‘election machine,’ it is actually development and progress that is BJP’s electoral machine.”-Amit Shah

“Modi has always been very particular about law and order. He believes in fairness and justice and encouraged us to simply work as per law without fear or favor. His ability to think big and implement it on the ground is exemplary. He had a vision of a bank account for every household.”-Amit Shah

“Organizations and institutions are, at the end of the day, manned by people who put their shared vision above individual interests.”-Amit Shah

“If BJP and its allies have been chosen by the people in state after state across regions, it is due to the good governance that Modi has successfully implemented and the ‘can do’ spirit of New India that he resonates.”-Amit Shah

“In public life, differences should not deter us from acknowledging the good work done by others whom we may not agree with.”-Amit Shah

“BJP has never done politics on religion, and no one should do it. It is against the spirit of our Constitution.”-Amit Shah

“Demonetisation was not a decision of the UP government. It is the central government’s decision.”-Amit Shah

“The importance of the leader has always mattered, whether it was Indira Gandhi, V. P. Singh, or Narendra Modi.”-Amit Shah

“It is better for a youth to earn living selling pakodas instead of being unemployed. Making pakodas is not shameful; what is shameful is comparing such a person with a beggar.”-Amit Shah

“Politics is not a laboratory experiment where you can control everything. You have to take calls even when you feel that matters may spin out of your hand.”-Amit Shah

“Sometimes you get more credit than you deserve.”-Amit Shah

“There is no rule or tradition in the BJP to forbid leaders to contest polls after they attain the age of 75.”-Amit Shah

“If Kerala wants development like other states in the country, then a BJP Government has to be formed here.”-Amit Shah

“How can BJP be anti-Bangla when BJP founder Syama Prasad Mookerjee himself was a Bengali?”-Amit Shah

“Who can keep the country safe? Who can make India a superpower? Can a coalition of 23 parties do so? Only Prime Minister Narendra Modi can achieve this.”-Amit Shah

“Can a Congress worker ever think of becoming a Prime Minister? No. Because that seat is reserved by birth at that party.”-Amit Shah

“Any party interested in the development of the country can come with us, as we never believed in political untouchability.”-Amit Shah

“All I can say is we will fully utilize our right to self-defense. No one can just do what they want on our borders.”-Amit Shah

“I don’t write off any political party. I believe in strengthening the BJP and winning elections and not depend on writing off parties.”-Amit Shah

“If a candidate at the MLA or chief ministerial level gets an advantage of belonging to a particular caste while fighting polls, that is one thing. But after having been elected, if you only look after the developmental needs of a particular caste or community, that is a different matter altogether. The BJP has never done that.”-Amit Shah