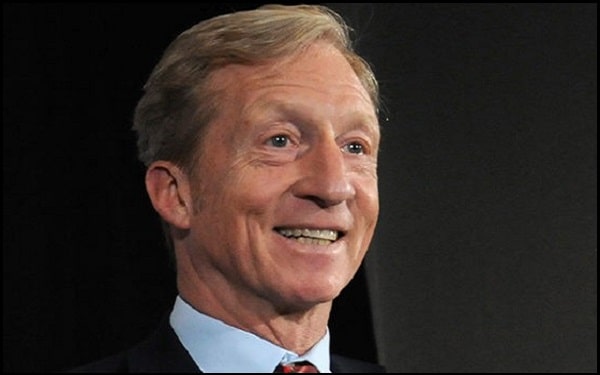 “Violence never solves problems. It may cover them up temporarily because of the fear it is intended to inspire, but it is part of a cycle, not the end of a cycle.”-Tom Steyer 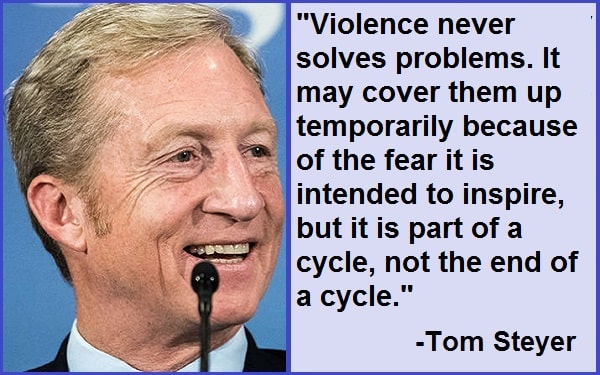 “The clarity of vision is the key to achieving your objectives.”-Tom Steyer

“We will pay a heavy price if we insist on navigating the 21st century with a 20th-century mindset.”-Tom Steyer

“Investing in more fossil fuel infrastructure will not strengthen our economy over the long-term since the market is clearly indicating that clean energy sources are the future.”-Tom Steyer

“My mother, Marnie Fahr Steyer, was a lifelong smoker – up to three packs of unfiltered cigarettes a day. I like to think that, if Mom were still with us today, she’d be happy with the strides we’ve made to protect our children from the ongoing health crisis of tobacco addiction.”-Tom Steyer

“If you know your destination, choosing a route – while not trivial – is manageable.”-Tom Steyer

“American democracy depends on the public’s ability to remain accurately informed on our state of affairs.”-Tom Steyer

“Tragically, no industry has done more to block crucial action to address climate change than the oil industry.”-Tom Steyer

“America can’t stop talking about Donald Trump. Even if we want to look away, we just can’t.”-Tom Steyer

“Trump has become the star of our 24-hour political news cycle, and every pundit in America seems to be grabbing for some of the reflected light from his explosive campaign.”-Tom Steyer

“Trump’s vitriol attracts large crowds and may even win him the Republican presidential nomination but dishonors our best traditions. It spits in the face of every protection and opportunity our Constitution promises.”-Tom Steyer

“Donald Trump’s crass charms are apparently very limited – historically so, if polling is any indication.”-Tom Steyer

“If he truly thinks he can be president, Donald Trump needs to understand that we need real solutions – not more walls and giveaways to polluting special interests.”-Tom Steyer

“Trump’s consistent position is that he will stop at nothing to protect his properties and his profits.”-Tom Steyer

“We can’t double down on the failed energy policies of the past.”-Tom Steyer

“Donald Trump may be unusually flamboyant, but his views are all too representative of the party that is about to nominate him for president.”-Tom Steyer

“Another word for politics in my mind is organization. You have to be organized; you have to get out there. It’s not just magic.”-Tom Steyer

“We think that when the American people make a decision together that they want something, politicians have to listen to them, and that’s the process we believe in.”-Tom Steyer

“Americans can take on huge projects. But they need to understand why they should take on a huge project.”-Tom Steyer

“That is not something I embrace. I think there are real distinctions between the Koch brothers and us.”-Tom Steyer

“I’m willing to do just about anything to try and contribute to getting us back on a growth path that is just and good for America.”-Tom Steyer

“I’ve spent a lot of time studying corporations and what makes them tick.”-Tom Steyer

“I believe that trying to deal with Donald Trump is like trying to play three-card monte in Central Park: it’s not going to work out.”-Tom Steyer

“I think that Chuck Schumer and Nancy Pelosi obviously are incredibly sympathetic to the DACA people. And so am I, of course.”-Tom Steyer

“Tar sands oil is dirtier, more corrosive, and worse for the environment than conventional oil.”-Tom Steyer

“I am a true believer that we have to change the way we generate and consume energy in the United States.”-Tom Steyer

“Tax cuts for the rich defund the critical public programs on which American families depend.”-Tom Steyer

“We need to make sure that we’re not in a society that is unbalanced and unfair and where the richest Americans are taking advantage of everybody else.”-Tom Steyer