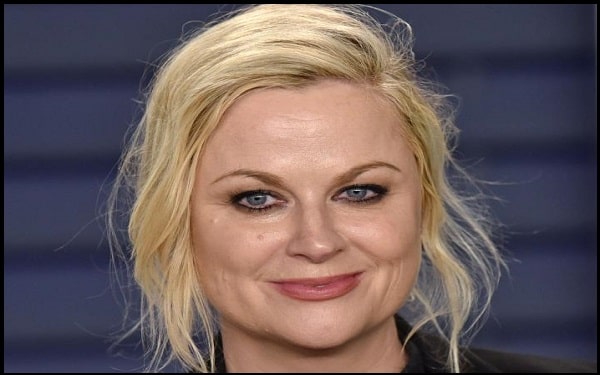 “When I had a job catering, I catered a wedding for the Smashing Pumpkins bassist in Indiana. And I served Billy Corgan shrimp off a tray.”-Amy Poehler 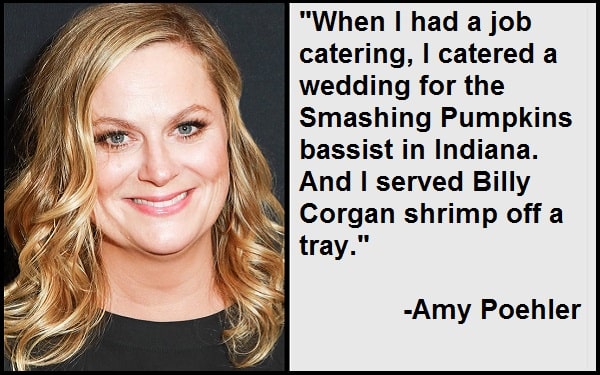 “Some people get in the way of change happening. Some people spend their whole careers thinking they can make a difference. Other people want to do as little as possible to get the day done.”-Amy Poehler

“I just love bossy women. I could be around them all day. To me, bossy is not a pejorative term at all. It means somebody’s passionate and engaged and ambitious and doesn’t mind leading.”-Amy Poehler

“I was the daughter of teachers, so school was always very important. I liked it.”-Amy Poehler

“The earlier you learn that you should focus on what you have, and not obsess about what you don’t have, the happier you will be.”-Amy Poehler

“You deserve love and you’ll get it.”-Amy Poehler

“Always remember your kid’s name. Always remember where you put your kid. Don’t let your kid drive until their feet can reach the pedals. Use the right size diapers… for yourself. And, when in doubt, make funny faces.”-Amy Poehler

“I’d say any good set or any comedy that I’ve worked on, that’s worked, has been comedians pitching ideas back and forth to each other. A lot of like, ‘What if you say this? What about this?'”-Amy Poehler

“So, if you’re doing a good long-form with talented people than you can step out and you can be the president or a construction worker and people accept that. It’s really the roles you give yourself.”-Amy Poehler

“Sometimes in my class, I have people come in and do monologues inspired by people they know and I always find that to be useful to do specifics about somebody and then you’re actually doing a character and not doing some random old lady or something.”-Amy Poehler

“Whenever I read stories of people doing huge pranks on set, all I think is, ‘These people have too much time on their hands.’ Besides, I don’t want to make some poor assistant clean up someone’s trailer after I’ve filled it with, say, Cadbury eggs. See? I can’t even think of a good prank.”-Amy Poehler

“I’m going to do ‘The Social Network Two: The Electric Boogaloo.’ And I have a part in ‘Beige Swan.’ I’m going to be the lead, but I don’t dance. I just do a lot of sitting down. It’s too tiring to get up and dance around. That should be coming out in 20-never.”-Amy Poehler

“I think real-life couples on screen are kind of deadly. For the most part, they’re kind of deadly. You’d be surprised. Unless they’re falling in love onscreen for the first time, you don’t have quite the same energy for some reason.”-Amy Poehler

“Improvisation is almost like the retarded cousin in the comedy world. We’ve been trying forever to get improvisation on TV. It’s just like stand-up. It’s best when it’s just left alone. It doesn’t translate always on TV. It’s best to live.”-Amy Poehler

“If you do a scene and you really like a character in it or a premise in it to write it down and to work on it so that you can have five or six characters that you can pull out in an audition.”-Amy Poehler

“I don’t watch a lot of comedy. For relaxation and escape, I watch shows about how people survive bear attacks. Or old episodes of ‘Law and Order,’ the Benjamin Bratt/Jerry Orbach era.”-Amy Poehler

“When you’re doing sketch comedy and you’re pregnant, it’s like wearing a giant sombrero in every sketch.”-Amy Poehler

“I get a little itchy if I don’t have some control.”-Amy Poehler

“As an actor, you can certainly, at any moment and at any time, discover 400 people who think you’re stupid, fat and ugly.”-Amy Poehler

“Any actor or actress that tells you that they don’t watch their stuff is lying.”-Amy Poehler

“In a recent Valentine’s Day posting on her fan website, Britney Spears says that – oh, who cares?”-Amy Poehler

“I think the days of putting your feet up when you’re pregnant are long gone. Women who are nine months pregnant now have to work till the bitter end – they don’t get to be on TV.”-Amy Poehler

“Tina Fey and I have 15 things in development: ‘Laverne and Shirley’, ‘Starsky and Hutch 3’, ‘Cagney and Lacey’, ‘Wonder Twins Activate From Two Hot Broads’, ‘Little House on the Prairie: The Musical: The Movie’.”-Amy Poehler

“I have to say I enjoy physical comedy and I’ve always loved to kind of take risks. I don’t like worrying too much about how I look or how I come across, so that can sometimes… You know, I like to play those kinds of deluded but fun characters.”-Amy Poehler

“I would love to do a serious period drama. Oh, absolutely. I mean, you’ll find most comedians want to do more serious stuff, most musicians want to be comedians, and most serious actors want to be musicians.”-Amy Poehler