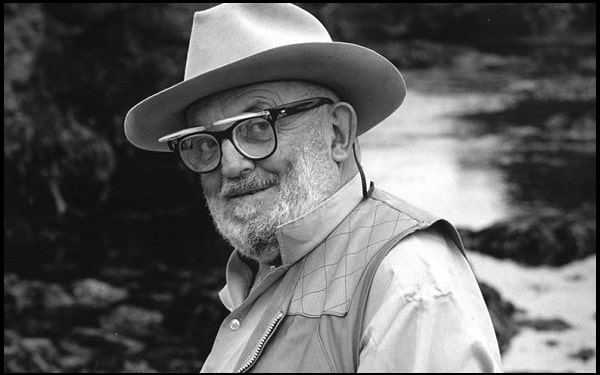 Ansel Adams Quotes:- Ansel Adams (February 20, 1902 – April 22, 1984) was a landscape photographer and environmentalist known for his black-and-white images of the American West.

“Photography, as a powerful medium of expression and communications, offers an infinite variety of perception, interpretation, and execution.”-Ansel Adams 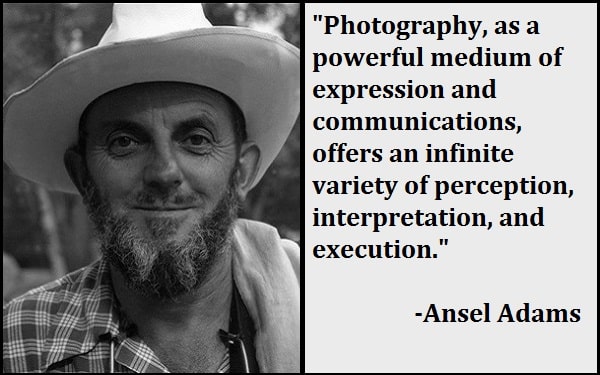 “The negative is comparable to the composer’s score and the print to its performance. Each performance differs in subtle ways.”-Ansel Adams

“You don’t take a photograph, you make it.”-Ansel Adams

“Millions of men have lived to fight, build palaces and boundaries, shape destinies and societies; but the compelling force of all times has been the force of originality and creation profoundly affecting the roots of the human spirit.”-Ansel Adams

“There is nothing worse than a sharp image of a fuzzy concept.”-Ansel Adams

“Sometimes I do get to places just when God’s ready to have somebody click the shutter.”-Ansel Adams

“In wisdom gathered over time I have found that every experience is a form of exploration.”-Ansel Adams

“I tried to keep both arts alive, but the camera won. I found that while the camera does not express the soul, perhaps a photograph can!”-Ansel Adams

“A photograph is usually looked at – seldom looked into.”-Ansel Adams

“There are always two people in every picture: the photographer and the viewer.”-Ansel Adams

“Yosemite Valley, to me, is always a sunrise, a glitter of green and golden wonder in a vast edifice of stone and space.”-Ansel Adams

“When words become unclear, I shall focus with photographs. When images become inadequate, I shall be content with silence.”-Ansel Adams

“It is my intention to present – through the medium of photography – intuitive observations of the natural world which may have meaning to the spectators.”-Ansel Adams

“Not everybody trusts paintings but people believe photographs.”-Ansel Adams

“These people live again in print as intensely as when their images were captured on old dry plates of sixty years ago… I am walking in their alleys, standing in their rooms and sheds and workshops, looking in and out of their windows. Any they, in turn, seem to be aware of me.”-Ansel Adams

“A good photograph is knowing where to stand.”-Ansel Adams

“In my mind’s eye, I visualize how a particular… sight and feeling will appear on a print. If it excites me, there is a good chance it will make a good photograph. It is an intuitive sense, an ability that comes from a lot of practice.”-Ansel Adams

“Some photographers take reality… and impose the domination of their own thought and spirit. Others come before reality more tenderly and a photograph to them is an instrument of love and revelation.”-Ansel Adams

“When I’m ready to make a photograph, I think I quite obviously see in my mind’s eye something that is not literally there in the true meaning of the word. I’m interested in something which is built up from within, rather than just extracted from without.”-Ansel Adams

“The only things in my life that compatibly exists with this grand universe are the creative works of the human spirit.”-Ansel Adams

“Photography is more than a medium for factual communication of ideas. It is a creative art.”-Ansel Adams

“We must remember that a photograph can hold just as much as we put into it, and no one has ever approached the full possibilities of the medium.”-Ansel Adams

“To photograph truthfully and effectively is to see beneath the surfaces and record the qualities of nature and humanity which live or are latent in all things.”-Ansel Adams

“Twelve significant photographs in any one year is a good crop.”-Ansel Adams

“There are worlds of experience beyond the world of the aggressive man, beyond history, and beyond science. The moods and qualities of nature and the revelations of great art are equally difficult to define; we can grasp them only in the depths of our perceptive spirit.”-Ansel Adams

“It is horrifying that we have to fight our own government to save the environment.”-Ansel Adams

“Dodging and burning are steps to take care of mistakes God made in establishing tonal relationships.”-Ansel Adams

“Myths and creeds are heroic struggles to comprehend the truth in the world.”-Ansel Adams

“The negative is the equivalent of the composer’s score, and the print the performance.”-Ansel Adams

“No man has the right to dictate what other men should perceive, create or produce, but all should be encouraged to reveal themselves, their perceptions and emotions, and to build confidence in the creative spirit.”-Ansel Adams

Motivational Will Rogers Quotes and Sayings