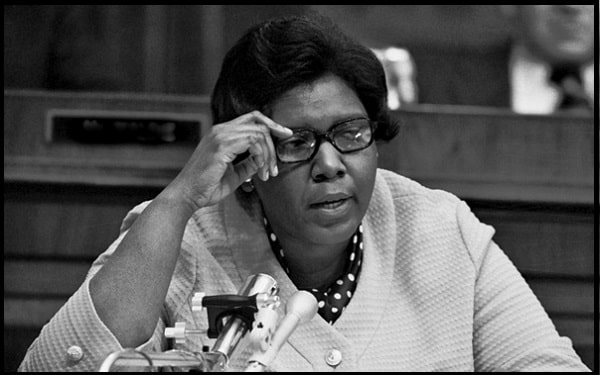 Barbara Jordan Quotes:- Barbara Jordan (February 21, 1936 – January 17, 1996) was an American lawyer, educator, and politician who was a leader of the Civil Rights Movement.

“I believe that women have a capacity for understanding and compassion which man structurally does not have, does not have it because he cannot have it. He’s just incapable of it.”-Barbara Jordan 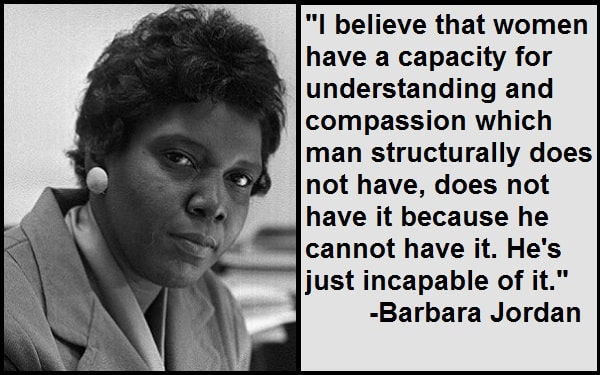 “Think what a better world it would be if we all, the whole world, had cookies and milk about three o’clock every afternoon and then lay down on our blankets for a nap.”-Barbara Jordan

“Do not call for black power or green power. Call for brain power.”-Barbara Jordan

“I never intended to become a run-of-the-mill person.”-Barbara Jordan

“It is the reason, and not passion, which must guide our deliberations, guide our debate, and guide our decision.”-Barbara Jordan

“We cannot improve on the system of government handed down to us by the founders of the Republic. There is no way to improve upon that. But what we can do is to find new ways to implement that system and realize our destiny.”-Barbara Jordan

“Throughout our history, when people have looked for new ways to solve their problems, and to uphold the principles of this nation, many times they have turned to political parties. They have often turned to the Democratic Party.”-Barbara Jordan

“I think it no accident that most of those emigrating to America in the 19th century identified with the Democratic Party. We are a heterogeneous party made up of Americans of diverse backgrounds.”-Barbara Jordan

“Let’s all understand that these guiding principles cannot be discarded for short-term political gains. They represent what this country is all about. They are indigenous to the American idea. And these are principles which are not negotiable.”-Barbara Jordan

“At other times, I could stand here and give this kind of exposition on the beliefs of the Democratic Party and that would be enough. But today that is not enough. People want more.”-Barbara Jordan

“We have made mistakes. In our haste to do all things for all people, we did not foresee the full consequences of our actions. And when the people raised their voices, we didn’t hear. But our deafness was only a temporary condition and not an irreversible condition.”-Barbara Jordan

“Even as I stand here and admit that we have made mistakes I still believe that as the people of America sit in judgment on each party, they will recognize that our mistakes were mistakes of the heart. They’ll recognize that.”-Barbara Jordan

“Let us heed the voice of the people and recognize their common sense. If we do not, we not only blaspheme our political heritage, we ignore the common ties that bind all Americans.”-Barbara Jordan

“But this is the great danger America faces. That we will cease to be one nation and become instead a collection of interest groups: city against suburb, region against region, individual against individual. Each seeking to satisfy private wants.”-Barbara Jordan

“For all of its uncertainty, we cannot flee the future.”-Barbara Jordan

“There is no executive order; there is no law that can require the American people to form a national community. This we must do as individuals and if we do it as individuals, there is no President of the United States who can veto that decision.”-Barbara Jordan

“Let each person do his or her part. If one citizen is unwilling to participate, all of us are going to suffer. For the American idea, though it is shared by all of us, is realized in each one of us.”-Barbara Jordan

“We call ourselves public servants but I’ll tell you this: we as public servants must set an example for the rest of the nation. It is hypocritical for the public official to admonish and exhort the people to uphold the common good.”-Barbara Jordan

“More is required of public officials than slogans and handshakes and press releases. More is required. We must hold ourselves strictly accountable. We must provide the people with a vision of the future.”-Barbara Jordan

“Let there be no illusions about the difficulty of forming this kind of a national community. It’s tough, difficult, not easy. But a spirit of harmony will survive in America only if each of us remembers that we share a common destiny.”-Barbara Jordan

“Education remains the key to both economic and political empowerment.”-Barbara Jordan