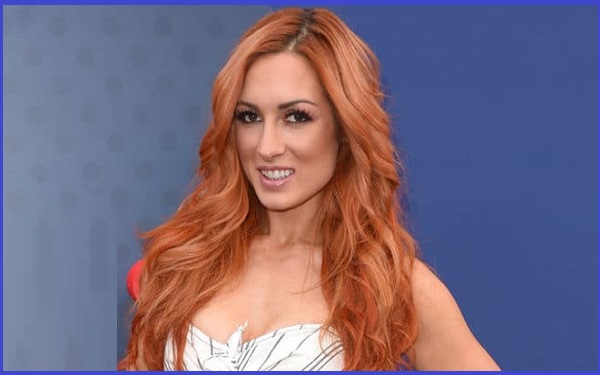 Becky Lynch Quotes:- Rebecca Quin (born 30 January 1987) is an Irish professional wrestler. She is currently signed to WWE on the Raw brand under the ring name Becky Lynch, where she is the current Raw Women’s Champion in her first reign, and the longest-reigning champion.

“You can be going through hardships sometimes, and you’re struggling, and then you’re wondering if you’re ever gonna make it.”-Becky Lynch 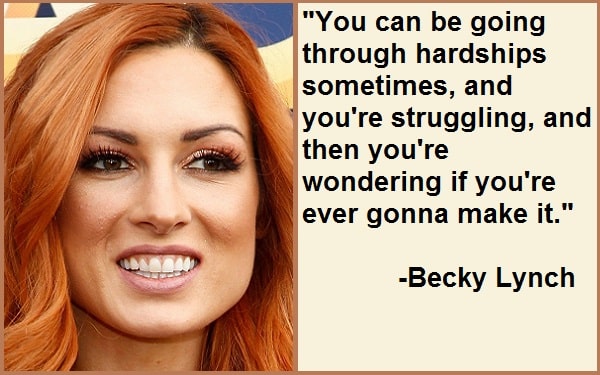 “My first time coming over to North America was to New York around Christmastime when I was 7. My mom was a flight attendant, and she got put on to the Trans-Atlantic route over Christmastime, so she brought the whole family.”-Becky Lynch

“If you can believe it, I had no intention of being a wrestler.”-Becky Lynch

“It’s so important just to be true to yourself and to own your own character and take responsibility for it, and speak up and say, This isn’t right; this isn’t me.’ It’s a great lesson, not just in wrestling but in life. If you’re not feeling something that’s true to your heart… everybody’s gotta be true.”-Becky Lynch

“I did my thesis on clowns. It’s a powerful thing when you’ve got this little red nose on. It’s a mask, the smallest in the world, but it unveils you. You stand up there and do these exercises that free you, let you play, and see what comes out. What comes out is the truth.”-Becky Lynch

“Peyton Royce and Billie Kay are two phenomenal workers; I would love to see them up here on Smackdown. They’re great girls with great talent. A bit of momentum, and we’re going to see amazing things from them.”-Becky Lynch

“My life changed completely. It’s crazy now. It’s kind of gone from striving and wondering and being confused and being lost to just feeling like the most blessed person in the world – just happy to wake up every day, happy to get on a plane every time. Just couldn’t be happier with life, really.”-Becky Lynch

“I want to make ‘Smackdown’ the brand to watch, but beyond that main-eventing, ‘WrestleMania’ is the next step.”-Becky Lynch

“Ember Moon is extremely talented, and Daria, from Tough Enough, she’s very unique and cool. The fans are going to get behind her. As for Asuka, she is phenomenal.”-Becky Lynch

“Someone told me, ‘When you go see Pearl Jam, it’s going to be a spiritual experience,’ and it was. It was my first time seeing them live, and I’ve been a lifelong fan. Eddie Vedder’s voice is a million times better live, and I couldn’t believe the passion he put into every single song.”-Becky Lynch

“Everybody that’s employed by ‘WWE’ – the biggest wrestling company in the world – should be good wrestlers able to tell good stories.”-Becky Lynch

“My whole ‘WWE’ career has been rebuilding myself and finding the confidence that I once had. It’s been one hell of a journey. There have been times I felt like the prodigal son because I left wrestling and abandoned this thing that I loved.”-Becky Lynch

“With women empowerment and women coming together, it’s not about being better than the guys or whatever. It’s just about collaboration; it’s about being equal people and having more of a highlight on women’s athletics and just women being equal in every aspect.”-Becky Lynch

“I started working out, eating a good diet, and just did everything I could that I thought would benefit me. I also started studying a lot harder in school. It matured me a remarkable amount and made me completely focused.”-Becky Lynch

“Being the leader of a division is a pressure, but it’s one that I feel I am ready for.”-Becky Lynch

“When things are scary, or there’s a struggle, I always think, ‘How is this going to sound in my biography?’ Sometimes I would just be living on protein shakes or the cheapest food that I could afford because I didn’t have a lot of money.”-Becky Lynch

“I’d read Stone Cold’s biography about how he lived on, like, raw potatoes, and I thought, this is all part of it. This is what wrestlers do, and this is what I’m going to do.”-Becky Lynch

“I think when you’ve got a passion for something, it comes out of you, and people can feel it. Then your mind is so geared towards that and how you can improve on it, and you’re so excited about performing that it comes together.”-Becky Lynch

“When I was a little kid, I used to watch with my brother when there was Macho Man and Hulk Hogan. But then I fell out of it for a few years.”-Becky Lynch

“Ronda Rousey changing the game for MMA, you know? Dana White said he’d never have a girl in the Octagon. Ronda Rousey comes along, and she’s the main event any time she’s on. The women, I feel, in the UFC are stealing the show.”-Becky Lynch

“The first thing I do when I get to any town is to find a gym and a breakfast place because I love breakfast.”-Becky Lynch

“Would you believe I never went to a hockey game when I was living in Canada?”-Becky Lynch

“I remember I did a boxing class. I remember sparring one time, and the guy smacked me right in the nose, and I was just like, ‘What is this? No. No. None of that.”-Becky Lynch

“McGregor is a businessman through and through. He’s obviously a wrestling fan.”-Becky Lynch

“I’d like there to be consistently more women’s storylines going on at the same time.”-Becky Lynch

“There were no wrestling schools in Ireland. It was completely unheard of.”-Becky Lynch

“This was something I always dreamed and wanted to be part of when women’s wrestling was freakin’ cool, and now it is.”-Becky Lynch

“Sometimes the storyline is as simple as, ‘We’re just going to be the best, and we’re going for the championships.”-Becky Lynch