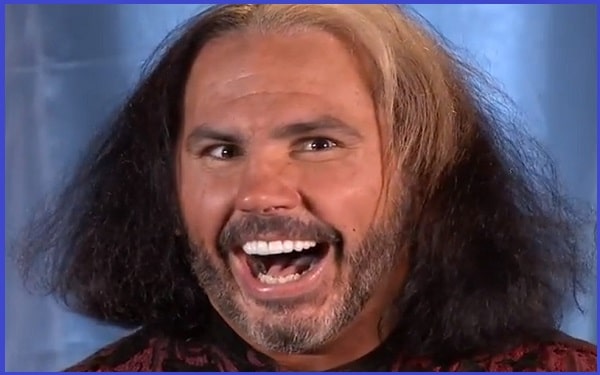 Matt Hardy Quotes:- Matt Hardy (born September 23, 1974)is an American professional wrestler currently signed in WWE, where he made appearances on the SmackDown brand.

Although best known for his WWE tenure, Hardy has also worked for Total Nonstop Action Wrestling (TNA) and Ring of Honor (ROH).

Along with his real-life brother Jeff, Matt gained notoriety in WWF’s tag team division due to the Hardys’ participation in tables, ladders, and chairs matches.

“It’s really easy to be in the WWE and let your passion or your pain or the schedule put you in a bad place.”-Matt Hardy 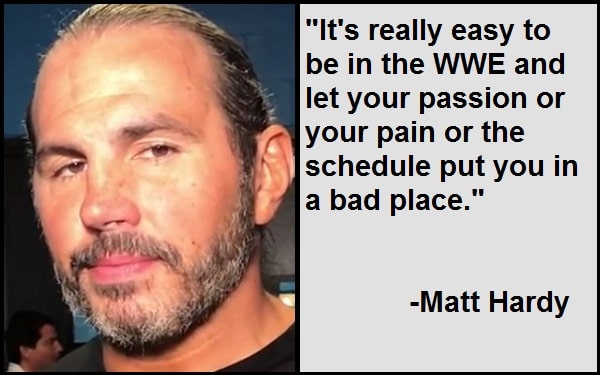 “People make mistakes, and either you fall from your mistakes, or you learn from them.”-Matt Hardy

“The most important thing any broken individual can do is keep their chin up and keep moving forward.”-Matt Hardy

“Father Time is the enemy none of us can beat.”-Matt Hardy

“Your true friends will tell you what they believe is true.”-Matt Hardy

“Love isn’t a switch you can turn on and off. You just can’t get rid of it, regardless of the circumstances, if you truly love someone.”-Matt Hardy

“My brokenness has made me become more primal, more instinctual.”-Matt Hardy

“I must admit I have never told anyone this before, but Sister Abigail is older than my essence.”-Matt Hardy

“I don’t ever want to be that guy who gets too big to take time to sign an autograph or take a picture, because I just know, without those fans, I’m nobody. A lot of people forget that fact when they make it.”-Matt Hardy

“One of the fun things about wrestling is that you can do a move and leave your stamp on the business forever.”-Matt Hardy

“When you really believe something, you need to stand up for it.”-Matt Hardy

“If the fans have an opinion, the wrestling universe has to listen.”-Matt Hardy

“I wouldn’t have been so successful if I didn’t have such a tremendous groundswell in support from my fans.”-Matt Hardy

“One thing I try to live by is to not have an end game. Just kind of life for the moment.”-Matt Hardy

“My soul existed in an African vessel hundreds of years ago as the leader of a tribe, and my tribe fought for honor.”-Matt Hardy

“I don’t have an end game. Being a celestial being, I live for the moment to fight the Great War, and that is to light the darkness.”-Matt Hardy

“Once we went off into the singles world, I noticed there is something very unique about Brother Nero. People are drawn to him, and he has intangibles and charisma that cannot be emulated or duplicated.”-Matt Hardy

“As you evolve, you learn that wrestling is not necessarily about stunts or spots. You need to go out and show the audience that they can love you for the persona you are – not because of the risk you’re willing to take or the jeopardy you’re willing to put your body in.”-Matt Hardy

“King Maxel is the greatest soul ever known to mankind.”-Matt Hardy

“I try to keep up with everything – all wrestling across the board. I want to know what the competition is doing, what the up-n-comers are doing.”-Matt Hardy

“There’s so much information accessible to everyone now because the Internet is so powerful; social media is so powerful.”-Matt Hardy

“When I wrestle as a tag team with my brother, it’s always great because we realize as our bodies, our vessels, age, we know we can’t do this forever.”-Matt Hardy

“I just understand that life is a constant change and a constant evolution.”-Matt Hardy

“Everything we do in the ‘Woken’ universe is so fantastical that wrestling fans, especially younger kids, who only know from tag team matches or Team Xtreme or whatnot, they need to learn what I am before we can start expanding.”-Matt Hardy

“That’s usually what I indulge in if I play some games – pinball.”-Matt Hardy

“The most important thing in the professional wrestling industry in this day and age of technology and the Internet and social media is to be able to make wrestling unpredictable.”-Matt Hardy

“I do all that I can to surprise people and make things unpredictable because that is what makes wrestling fun.”-Matt Hardy

“Every day is great when your name is “-Matt Hardy.”-Matt Hardy

“My wife is an incredible pianist. I don’t think there’s anything my wife can’t do, in all actuality.”-Matt Hardy

“The only things that matter to me are the TNA World Heavyweight Title, my bank accounts, my family, and those who support me.”-Matt Hardy

“I love wrestling. That’s not going to change.”-Matt Hardy

“I got a lot of great years on WWE TV and I made a lot of money throughout the business. So, if I don’t do anything else, I’m good. I can kind of do what I want to, which is a very nice feeling to have.”-Matt Hardy

“I, first and foremost, want to make sure that I am personally healthy and happy in my life.”-Matt Hardy

“One thing that is very exciting and unpredictable about professional wrestling is that anything can happen.”-Matt Hardy

“I’ve accomplished everything I ever wanted to do in my career.”-Matt Hardy

“You know that if you come to WWE and want to maintain a certain level of success, you’re going to be busy and gone a lot. It’s part of the deal.”-Matt Hardy

“TNA has had a lot of great periods – Hulk Hogan even came in, but I don’t think he was beneficial to TNA. They spent a lot of money on him but made a lot of mistakes. They should have saved that money for me.”-Matt Hardy

“With ‘Total Nonstop Deletion,’ my main goal is to give people the two hours of the most fun wrestling they have ever seen.”-Matt Hardy

“House Hardy – myself and Brother Nero – are pioneers. My style of booking during early independent bookings was very similar to what ‘Ring of Honor’ later became, which is what WWE later became.”-Matt Hardy

“Many people found ‘Mattitude’ absolutely delightful. As time went on, it was a constant evolution of change.”-Matt Hardy

“It is amazing that, whenever a ladder match is announced, people automatically think of the Hardys.”-Matt Hardy

“To know you’re truly alive in wrestling, you have to constantly challenge yourself. You constantly have to do things that you’re unsure you can do.”-Matt Hardy

“If I don’t lift weights, I don’t feel healthy.”-Matt Hardy

“People keep saying EC3 is the heart and soul of TNA: that he’s this homegrown star, and he is going to be this big star. But fans don’t understand that I’m the true star – I came off Vince McMahon’s TV.”-Matt Hardy

“I was brought up poor, but I’ve earned every cent in my bank account.”-Matt Hardy

“All I can say is that ‘Raw’ is an amazing show.”-Matt Hardy

“I am willing to do business and I’m willing to play ball with anyone, for I am very open-minded.”-Matt Hardy

“Living in the age of information and technology, everything gets out so easy and so, so quickly.”-Matt Hardy

“There are many hard truths that we must face in life.”-Matt Hardy

“TNA has been extraordinary to me, nothing but professional.”-Matt Hardy