Blake Shelton Quotes:- Blake Shelton (born June 18, 1976) is an American country music singer and television personality. In 2001, he made his debut with the single “Austin”.

“When I think about the songs I might record, I ask myself, ‘Can I picture anybody I know back home sitting in their truck cranking this up?'”-Blake Shelton 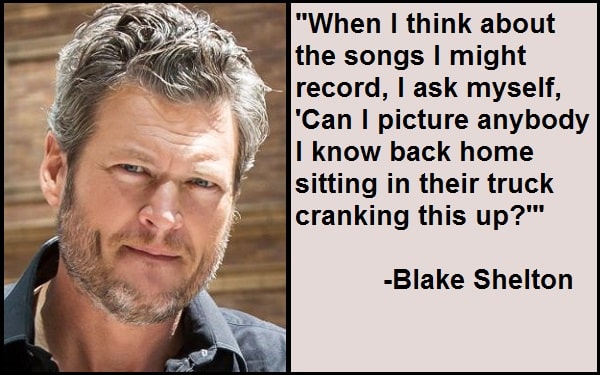 “I think every cute girl is told to move to L.A. someday. So I do like the drive over from my house to the studio.”-Blake Shelton

“I get on Twitter, one of my routines during the day, if I’m home is, I wake up, get a cup of coffee, turn on the Weather Channel and I’ll look at what people are saying to me on Twitter on my phone.”-Blake Shelton

“The Doobie Brothers ‘What a Fool Believes’ makes me want to move. And I still haven’t gotten over the Macarena. Who has?”-Blake Shelton

“Michael Buble is seriously my favorite entertainer. Have you ever seen the guy in concert? He’s hilarious. Women love him. Guys want to meet him. He has everything that I wish I could do onstage. And I’m guessin’ he’s a good-lookin’ guy – although he’s not one of ‘People’ magazine’s sexiest men.”-Blake Shelton

“Where I live in Oklahoma, it’s all ranchers. My friends are all cowboys and pretty rough guys. If I had a hot tub back there, I may as well have Richard Simmons come over and live with me.”-Blake Shelton

“Ironically, being a coach on ‘The Voice’ and spending time with those kids, Xenia and Dia especially, I learned a lot about myself. It reminded me how lucky I am that this happened for me, and it kind of lit the spark inside me again for my love of music.”-Blake Shelton

“I like California but I’m dyed-in-the-wool Oklahoma. I see a deer in L.A., and everybody’s standing around it taking pictures. Back home, that’s the enemy!”-Blake Shelton

“I’m not that smart, but I’m smart enough to know that if Usher wants to help you, you let him.”-Blake Shelton

“I love to deer hunt and fish and drive down the back roads in my truck. All those things basically equal freedom to me – and not having to return that message or call from my record company or management.”-Blake Shelton

“The standing center stage in the six-foot circle of woodcut from the stage of the Ryman is something I never take for granted. The history and legacy of that circle are awe-inspiring.”-Blake Shelton

“As a country singer, there is only one place you dream of playing in your lifetime, and that is the Grand Ole Opry House.”-Blake Shelton

“The way my family always did Christmas was on Christmas Eve, it wasn’t really centered around dinner on Christmas Eve. It was more about keeping the kids calm. Sometime after dark is when we were going to open all the presents underneath the tree from Mom, Dad and the kids and everything – just the family presents was every Christmas Eve.”-Blake Shelton

“I don’t know anybody as creative and unique and off the wall as Dia Frampton. She’s always asking me, ‘Am I too weird?’ I just tell her, ‘People don’t think you’re weird, they think you’re cool.'”-Blake Shelton

“I don’t ask other artists for too much advice.”-Blake Shelton

“One of my pet peeves about Nashville is that it tends to be copycatted. I don’t want to do that. I’ve got to be different.”-Blake Shelton

“I got a job working at a publishing company, Balmur Music, which was a company that Anne Murray was a co-owner in, as a tape copy guy. Eventually, I got fired from that job.”-Blake Shelton

“The Grand Ole Opry is an artist, and I am proud to be one of its songs.”-Blake Shelton

“I get the same feeling walking into the Opry House as I do when I see one of my heroes.”-Blake Shelton

“If you’re in the public eye, people are going to take shots at you.”-Blake Shelton

“I probably have the crappiest tattoo – not only in country music – but maybe the world.”-Blake Shelton

“I hate reality shows. But if I had to be on one, I’d have to say ‘Realtree Road Trips’ on the Outdoor Channel.”-Blake Shelton

“The only thing you can do to make catfish edible is frying them.”-Blake Shelton

“When things go wrong or don’t turn out the way you pictured them in your head, you just have to go with the best intentions defense. I have a lot of good intentions.”-Blake Shelton

“I’m not too big on cats, and sometimes I’ll say something like that, and people get so mad at me. But the truth is, I don’t care if they get mad.”-Blake Shelton

“I still love farming and gardening and things like that in the summertime.”-Blake Shelton

“I lost my brother in a car wreck when I was 14 years old. When I decided I wanted to be a country singer, my dad always told me, ‘Son, you should write a song about your brother.'”-Blake Shelton

“I always wished I had a song like that George Strait song, ‘The Chair’, ’cause it’s basically just a guy trying to pick up a girl at a bar.”-Blake Shelton

“Somebody will come on TV singing, and you’re like, ‘Oh my God! I mean, they suck! You know, who signed them?’ Well, it’s just because she’s good lookin’, or it’s because he’s takin’ his shirt off and he’s muscley or something, or else he wouldn’t have gotten his chance.”-Blake Shelton

“Country music has to evolve in order to survive.”-Blake Shelton

“Not everybody in the country music community is like me – I just happen to be one of the guys that are stereotypical.”-Blake Shelton

“I had so much fun playing songs from ‘Based On A True Story…’ and getting to see the crowd’s reaction to those songs was unforgettable.”-Blake Shelton

“When you start dating another country star, the first question is, ‘When are y’all gonna do a duet?’ And what sucks about that is people expect you to do it whether you want to or not.”-Blake Shelton

“My critics are pretty tough. I’ve never been one of the music industry’s pets.”-Blake Shelton

“I’m not a summertime guy. The only time I really enjoy the summer is touring and performing because there is nothing else for me to do at home. It’s too hot, and you can’t farm. You can’t hunt.”-Blake Shelton

“I would not want to be Richard Simmons… right now or anytime. He seems like a nice guy, but if I had to dress like that? That would absolutely suck.”-Blake Shelton

“I think just knowing you’re married and having that in the back of your mind all the time – it sounds official, but it doesn’t really feel any different. We don’t do anything differently than we did before.”-Blake Shelton

“I grew up listening to 1980s country music, mostly. The early ’90s. That time period was my favorite.”-Blake Shelton

“Every day, somebody has a song they want you to hear, and you’re stupid if you don’t listen to it because you never know what you may find.”-Blake Shelton

“Because of Twitter, I think people know most every single thing about me. I don’t know if there’s anything that would surprise people about me.”-Blake Shelton

“I love to deer hunt and fish and drive down the back roads in my truck. All those things basically equal freedom to me – and not having to return that message or call from my record company or management. At some point, I need to recharge.”-Blake Shelton