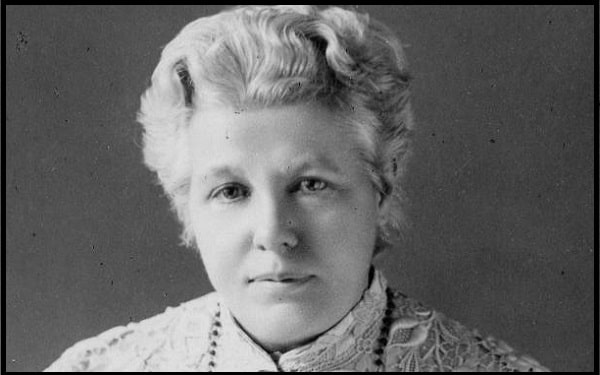 “What, after all, is the object of education? To train the body in health, vigor, and grace, so that it may express the emotions in beauty and the mind with accuracy and strength.”-Annie Besant 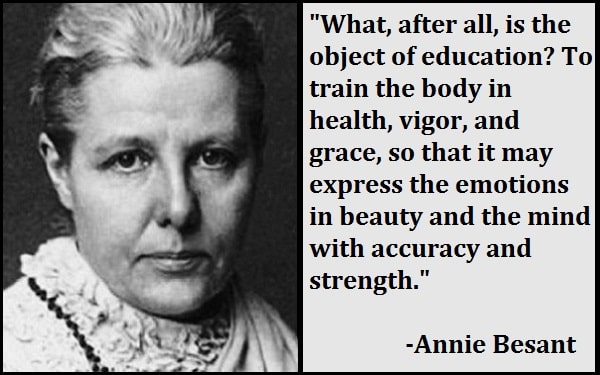 “I often think that woman is freer in Islam than in Christianity. The woman is more protected by Islam than by the faith which preaches monogamy. In AI Quran the law about a woman is juster and more liberal.”-Annie Besant

“Muhammadan law in its relation to women is a pattern to European law. Look back to the history of Islam, and you will find that women have often taken leading places – on the throne, in the battle-field, in politics, in literature, poetry, etc.”-Annie Besant

“The destruction of India’s village system was the greatest of England’s blunders.”-Annie Besant

“Representative institutions are as much a part of the true Briton as his language and his literature.”-Annie Besant

“Man is ever searching for the source whence he has come, searching for the life which is upwelling within him, immortal, nay, eternal and divine, and every religion is the answer from the Universal Spirit to the seeking spirits of men that came forth from Him.”-Annie Besant

“The essence of religion is the knowledge of God which is eternal life. That and nothing less than that is religion. Everything else is on the surface, is superfluous save for the needs of men.”-Annie Besant

“What is the constitution of the universe? The universe is the manifestation of the divine thought; the thought of God embodies itself in the thought-forms that we call worlds.”-Annie Besant

“Evil is only imperfection, that which is not complete, which is becoming, but has not yet found its end.”-Annie Besant

“That is the true definition of sin; when knowing right you do the lower, ah, then you sin. Where there is no knowledge, sin is not present.”-Annie Besant

“Beauty is no dead thing. It is the manifestation of God in nature. There is not one object in nature untouched by man that is not beautiful, for God’s manifestation is beauty. It shines through all His works, and not only in those that may give pleasure to the man.”-Annie Besant

“The matter is, in its constituent elements, the same as spirit; existence is one, however, manifold in its phenomena; life is one, however multiform in its evolution.”-Annie Besant

“We have no right to pick out all that is noblest and fairest in man, to project these qualities into space, and to call them God. We only thus create an ideal figure, a purified, ennobled, ‘magnified’ Man.”-Annie Besant

“The birth of science rang the death-knell of an arbitrary and constantly interposing Supreme Power.”-Annie Besant

“There can be no wise politics without thought beforehand.”-Annie Besant

“No durable things are built on violent passion. Nature grows her plants in silence and in darkness, and only when they have become strong do they put their heads above the ground.”-Annie Besant

“All men die. You may say: ‘Is that encouraging?’ Surely yes, for when a man dies, his blunders, which are of the form, all die with him, but the things in him that are part of the life never die, although the form is broken.”-Annie Besant

“The Roman Catholic Church, had it captured me, as it nearly did, would have sent me on some mission of danger and sacrifice and utilized me as a martyr; the Church established by law transformed me into an unbeliever and an antagonist.”-Annie Besant

“To me in my childhood, elves and fairies of all sorts were very real things, and my dolls were as real children as I was myself a child.”-Annie Besant

“We were an ill-matched pair, my husband and I, from the very outset; he, with very high ideas of a husband’s authority and a wife’s submission, holding strongly to the ‘master-in-my-own-house theory,’ thinking much of the details of home arrangements, precise, methodical, easily angered and with difficulty appeased.”-Annie Besant

“I have ever been the queerest mixture of weakness and strength, and have paid heavily for the weakness.”-Annie Besant

“My first serious attempts at writing were made in 1868, and I took up two very different lines of composition; I wrote some short stories of a very flimsy type, and also a work of a much more ambitious character, ‘The Lives of the Black Letter Saints.'”-Annie Besant

“The body is never more alive than when it is dead; but it is alive in its units, and dead in its totality; alive as a congeries, dead as an organism.”-Annie Besant

“Science regards man as an aggregation of atoms temporarily united by a mysterious force called the life-principle. To the materialist, the only difference between a living and a dead body is that in the one case that force is active, in the other latent.”-Annie Besant