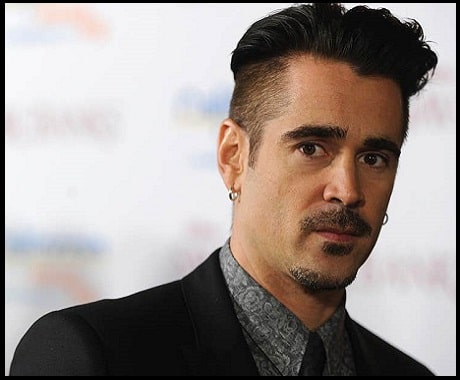 Colin Farrell Quotes:-  Colin Farrell (born 31 May 1976) is an Irish actor. Farrell appeared in the BBC drama Ballykissangel in 1998, made his film debut in the Tim Roth-directed drama The War Zone in 1999, and was discovered by Hollywood when Joel Schumacher cast him as the lead in the war drama Tigerland in 2000.

“I’ve never seen a moon in the sky that, if it didn’t take my breath away, at least misplaced it for a moment.”-Colin Farrell 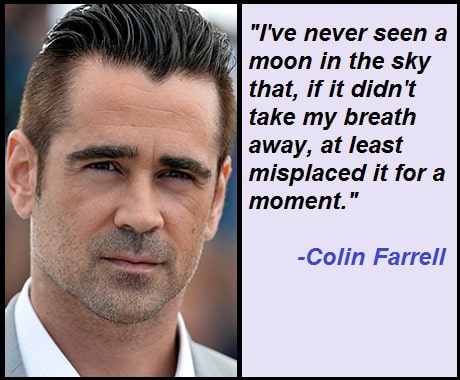 “I love the grandiosity, how sweepingly entertaining films can be. And I think there’s a place for films that pry more into the human condition.”-Colin Farrell

“But I dare not think too far into the future on the risk that I’ll miss the present.”-Colin Farrell

“Being Irish is very much a part of who I am. I take it everywhere with me.”-Colin Farrell

“I couldn’t care less about who sees my bits… My friends asked how I could do scenes like that and not get excited, but it wasn’t like that. My bits looked the size of a cashew nut!”-Colin Farrell

“I think I’m still trying to find my feet as an actor. And I know it ain’t brain surgery, but it confuses me and it comes between me and my sleep a lot.”-Colin Farrell

“I’ll be in Los Angeles for two weeks and I’ll have a laugh, get battered and have a buzz, but at the end of the day, I’ll go home. It’s just me earning a few more stories to tell everyone at home and all.”-Colin Farrell

“My Dublin wasn’t the Dublin of sing-songs, traditional music, sense of history and place and community.”-Colin Farrell

“I’m not painting myself as a down-home, modest guy.”-Colin Farrell

“I mean, we are tribal by nature, and sometimes success and material wealth can divide and separate – it’s not a new philosophy I’m sharing – more than hardship, hardship tends to unify.”-Colin Farrell

“I’m not going to lie, there are more interesting ways to spend your time than answering questions about yourself. But if there were no questions to ask me, I might have a beef with that.”-Colin Farrell

“If after you read something, you connect with it, you want to do it.”-Colin Farrell

“Vampires have always held a very seductive kind of lore and have always been some variety of attractive, whether it’s attractiveness that’s born of just the physical attributes that they have – this kind of ethereal beauty or translucent pallor – or whether it is more to do with the way they carry themselves.”-Colin Farrell

“I do enjoy reading some science fiction.”-Colin Farrell

“The first time you hold your baby in your arms, I mean, a sense of strength and love wash over you. It washed over me and I never thought that possible.”-Colin Farrell

“The sea always offers up incredible stories of survivors’ fortitude. Myths of a lot of countries have variations on that.”-Colin Farrell

“Magic is at the core of myths.”-Colin Farrell

“Anything that’s different from your own realm of experience as a human being, whether it’s driving a car or a boat, or using guns, anything that separates you from yourself and leads you more towards this character’s existence is a big help.”-Colin Farrell

“Life is apogee, apex, decline; life is death – and everything else is open to discussion.”-Colin Farrell

“I was never an A student, but I was really well behaved until I was 13 or so.”-Colin Farrell

“I’m not keen on cars and motorbikes. I tried to be a biker, but it wasn’t me – I bought a Harley-Davidson and dumped it.”-Colin Farrell

“I like to go for a little drive up the California coast.”-Colin Farrell

“What my first son James did was allow me to care for something in this world when I couldn’t care for myself. James saved my life.”-Colin Farrell

“I’ve got plenty of love in my life already in the form of my sons and a few good friends who I value dearly.”-Colin Farrell

“I will say that as I get older and calmer and quieter in my own self, the one quality in a woman that I find more and more attractive is kindness. A sense of adventure and humor is important too, but I truly find kindness and consideration for others to be the most attractive thing in anyone.”-Colin Farrell

“You spend so much time in your head in life. And what yoga does is, it asks you to allow your head to be quiet, to allow it to be still, just for an hour and a half. Just deal with your body and your breath. And it’s a great workout. I love it.”-Colin Farrell