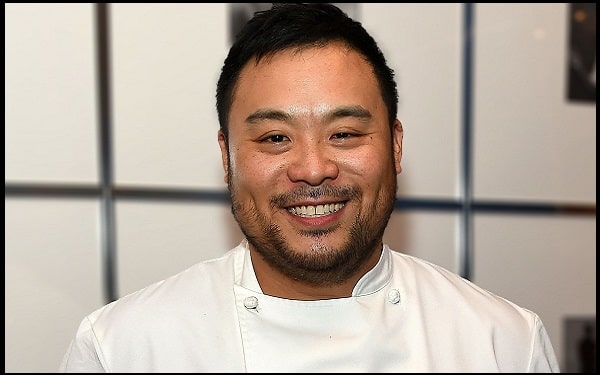 “The one reason why I got into cooking was that I wasn’t good at anything else – not that I was good at it, but it was considered honest work.”-David Chang 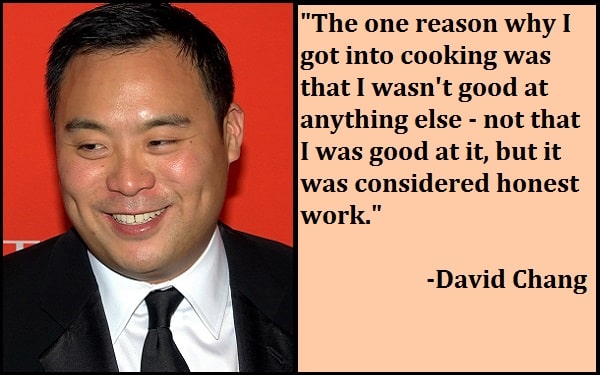 “If you ask what people say what American cuisine is, they cannot really do it. I don’t know what it is.”-David Chang

“Growing up, my dad owned a restaurant in Washington, DC, and food was something I was passionate about. But when I finally got into it, I felt like it was so late in the game; that’s why I worked seven days a week at Craft and Mercer Kitchen. I wanted to see how far I could take it.”-David Chang

“I think being Shaquille O’Neal would be the most amazing thing. There’s nothing I would have done differently in his life. Everything he’s done I think is pretty spot-on, even, like, the bad rap videos, the shoes, the movies, everything.”-David Chang

“Fine dining teaches you how to cook many different things, and it gives you the basic fundamentals, but these specialty restaurants, they’re not teaching you the broad foundation you need to become a well-rounded cook.”-David Chang

“There’s a common misconception that restaurants make a lot of money. It’s not true. If you look at maybe the top chef in the world, or at least monetarily, it’s like Wolfgang Puck, but he makes as much money as an average crappy investment banker.”-David Chang

“I think the basic thing that home cooks can learn how to do is just season properly… If the home cook realized how little salt they use compared to what’s needed, it would make their food taste better.”-David Chang

“Contemporary ramen is totally different than what most Americans think ramen should be. Ramen is not one thing; there are many, many different types.”-David Chang

“To me, there are two types of celebrity: there’s a good celebrity – people that are attracted to the food and working and trying to create something great – and then there’s a bad celebrity – those who are working on being a celebrity.”-David Chang

“People are getting famous now for serving food out of a truck, or for, well, pork buns. I don’t know if I’m really pleased to be a part of that. I’m somewhat terrified of what the future holds, especially in America.”-David Chang

“Chef Thomas Keller was an inspiration to me and many, many young cooks like me. He told us that the role of the new, modern chef is different.”-David Chang

“I’m not cooking every day anymore, and that’s the biggest withdrawal. Cooking is honest work. Now I don’t know how to measure myself.”-David Chang

“I feel like I’m losing my ability to understand reality; like when someone loses their hearing, they can still speak English, but their speech eventually becomes distorted because they can’t hear themselves.”-David Chang

“Fear is a driving force for most of the things that I do. I don’t know if that’s healthy.”-David Chang

“Don’t even get me started. I’m not against all vegetarians. But if you’re a vegetarian for ethical reasons, you may be causing more harm.”-David Chang

“If you’re going to be a vegetarian, limit yourself to food from a place you can go to in two hours and just eat that.”-David Chang

“When you meet the farmers and go to the farms, you see that they treat their animals like their family. It makes a big difference.”-David Chang

“Shouldn’t a three-course meal be 90 minutes? Do you know how hard you have to edit your menu to pull that off? Twenty-seven minutes. That’s the average meal at Jiro’s in Tokyo.”-David Chang

“If I have a really bad cook or a bad manager or bad sous-chef, I previously would have fired them or lost my temper. But now I realize that if I’m so right, then I should be able to communicate it so clearly that they get it.”-David Chang

“I hate to say ‘chain restaurant,’ but we’re sort of a corporation now. How do we defy that concept, where people assume each restaurant can’t be good?”-David Chang

“I’m grasping with how you do something on a large scale with multiple operations and not have quality decrease.”-David Chang

“I like eggs. My favorite way of cooking eggs is old school French.”-David Chang

“The process and organization leading up to cooking the egg can tell you a lot about the cook.”-David Chang

“I find that there are a lot of similarities between French and Japanese food. I think they’re two countries that have really systemized their cuisine and codified it.”-David Chang

“When I was in Japan, everyone wanted to work for Pierre Gagnaire, and they wouldn’t miss a beat.”-David Chang

“I lived across the street from Noodle Bar. I could barely stand it because you’re there all the time; you can’t get away.”-David Chang

“I wanted to disprove the notion that you couldn’t open a great restaurant in a casino.”-David Chang

“Yes, natural is good and healthy, and whole foods are important. However, experimentation is important, too.”-David Chang

“‘Tampopo’s amazing. I think it’s an absolutely fantastic movie, but I don’t think it captures for me the meaning of food.”-David Chang

“I’ve never bribed my way into a restaurant. I’ve never slipped a C-note or greased a palm. In truth, I’ve never even considered it. I’ve assumed, of course, that people do such things.”-David Chang

“For everyday diners in Manhattan, cracking the waiting list at Nobu is said to be harder than getting courtside tickets for the Knicks.”-David Chang

“Open your refrigerator, your freezer, your kitchen cupboards, and look at the labels on your food. You’ll find ‘natural flavor’ or ‘artificial flavor’ in just about every list of ingredients. The similarities between these two broad categories are far more significant than the differences.”-David Chang

“Be careful what you wish for – getting to be a successful business and maintaining it is so hard. Anyone can be good one night; being good over several years is incredibly difficult.”-David Chang

“My dad was in the restaurant business, but I didn’t really think about following him. Had I done better at school, I don’t know if I would have been a chef.”-David Chang

“To eat well, I always disagree with critics who say that all restaurants should be fine dining. You can get a Michelin star if you serve the best hamburger in the world.”-David Chang

“I look forward to the spring vegetables because the season is so short. Mushrooms, edible foraged herbs, wild leeks, early season asparagus.”-David Chang

“America is a country of abundance, but our food culture is sad – based on huge portions and fast food. Let’s stop with the excuses and start creating something better.”-David Chang