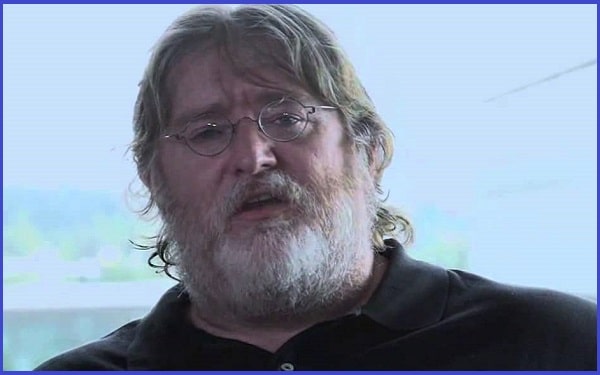 Born in Colorado, he attended Harvard University in the early 1980s, but dropped out and worked for Microsoft, where he worked as a producer for some of the early Windows operating systems.

“The Internet is changing what entertainment and sports are. It’s not just a few people authoring experience for others. It’s really growing out of what everybody does.”-Gabe Newell 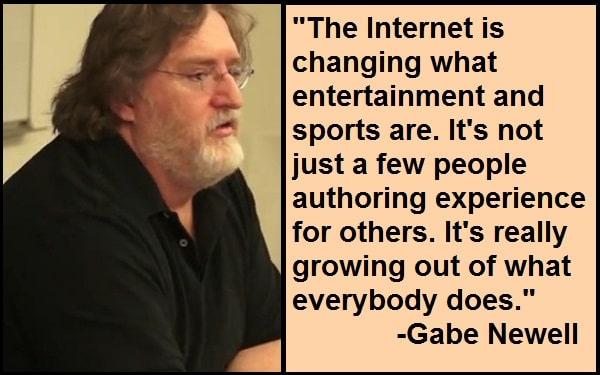 “Everybody understands that you’re supposed to say ‘our employees are our most valuable asset’ to the point where, even if it’s really true, they’re not going to really trust you until you’ve earned that – same with customers.”-Gabe Newell

“Most people who end up being successful have good grades, but it’s orthogonal – there’s no extra information than if they put together a website and have a bunch of fans who love coming and seeing what they’re doing.”-Gabe Newell

“Traditional credentialing really doesn’t have a lot of predictive value to if people will be successful.”-Gabe Newell

“If you look at a multi-player game, it’s the people who are playing the game who are often more valuable than all of the animations and models and game logic that’s associated with it.”-Gabe Newell

“It used to be that you needed a $500-million-a-year company in order to reach a worldwide audience of consumers. Now, all you need is a Steam account. That changes a whole bunch of stuff. It’s kind of a boring ‘gee, information processing changes a stuff’ story, but it’s going to have an impact on every single company.”-Gabe Newell

“Ninety percent of games lose money; 10 percent make a lot of money. And there’s a consistency around the competitive advantages you create, so if you can actually learn how to do the art, the design, and the programming, you would be consistently very profitable.”-Gabe Newell

“The big problem that is holding back Linux is games. People don’t realize how critical games are in driving consumer purchasing behavior. We want to make it as easy as possible for the 2,500 games on Steam to run on Linux as well.”-Gabe Newell

“One of the things that are interesting is that the PC has always had a huge amount of scalability. It was sort of the wild dog that moved into Australia and killed all the local life because it could just adapt. There used to be these dedicated devices, like dedicated word processors.”-Gabe Newell

“As somebody who participates in the overall PC ecosystem, it’s totally great when faster wireless networks and standards come out or when graphics get faster. Windows 8 was like this giant sadness. It just hurts everybody in the PC business.”-Gabe Newell

“A lot of times I make people better by getting stupid, distracting, bureaucratic stuff off their desks. That’s an incredibly easy way to make a senior person more productive.”-Gabe Newell

“When I worked at Microsoft, I got to go and visit a bunch of different companies. Probably a hundred different companies a year. You’d see all the different ways they’d work. The guys who did Ventura Publisher one day, and then United Airlines the next. You’d see the 12 guys in Texas doing Doom, and then you’d go see Aetna life insurance.”-Gabe Newell

“One of the things that’s important about family is the narrative history they create for themselves.”-Gabe Newell

“If I buy a game on Steam and I’m running it on Windows, I can go to one of the Steam machines and already have the game. So you benefit as a developer; you benefit as a consumer in having the PC experience extended in the living room.”-Gabe Newell

“Growing up in the Sacramento Valley in the ’70s, we were all pretty big into cars. Of course, I had to nerd out and be a fan of Bob Tullius’ Group 44 Jaguars instead of Corvettes/Camaros.”-Gabe Newell

“The culture at Valve is pretty much crowdsourced. The handbook is a wiki. One of the first things we say to new hires is, ‘You have to change something in the handbook.'”-Gabe Newell

“I’m a handsome man with a charming personality.”-Gabe Newell

“A store is just a collection of content. The Steam store is this very safe, boring entertainment experience. Nobody says, ‘I’m going to play the Steam store now.'”-Gabe Newell

“Photoshop should be a free-to-play game. There’s not really a difference between very traditional apps and how they enhance productivity and wandering around a forest and killing bears.”-Gabe Newell

“I think it’s highly likely that we’ll continue to have high-performance graphics capability in living rooms. I’m not sure we’re all going to put down our game controllers and pick up touch screens – which is a reasonable view, I’m just not sure I buy into it.”-Gabe Newell

“To people who traditionally charge $10,000 for a 3D animating app, we say you should be free-to-play and generate a revenue stream. Think of a 3D modeling package almost like an RPG.”-Gabe Newell

“The easiest way to stop piracy is not by putting antipiracy technology to work. It’s by giving those people a service that’s better than what they’re receiving from the pirates.”-Gabe Newell

“I consider Apple to be very closed. Let’s say you have a book business, and you are charging 5 to 7 percent gross margins; you can’t exist in an Apple world because they want 30 percent, and they don’t care that you only have 7 percent to play with.”-Gabe Newell

“What’s the right way to think about the distribution part of Steam? You need to worry about viruses and people trying to publish other people’s content, but the underlying thing is to eliminate that barrier between people who create stuff and people who want to have access to it.”-Gabe Newell