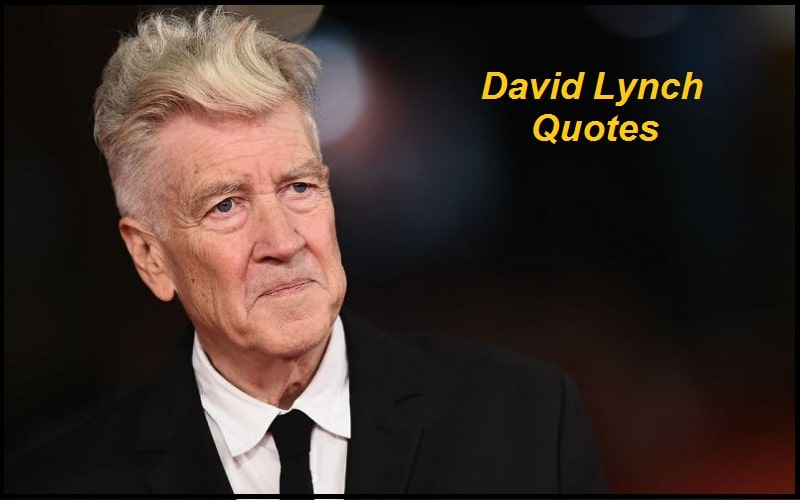 David Lynch Quotes:- David Lynch (born January 20, 1946) is an American filmmaker, painter, musician, actor, and photographer. He is best known for acclaimed films such as Eraserhead, Blue Velvet, and Mulholland Drive, regarded by some critics as among the best films of their respective decades, and for his successful 1990–91 television series Twin Peaks, which led to him being labeled “the first popular Surrealist” by noted film critic Pauline Kael.

“Stories hold conflict and contrast, highs and lows, life and death, and the human struggle and all kinds of things.”–David Lynch 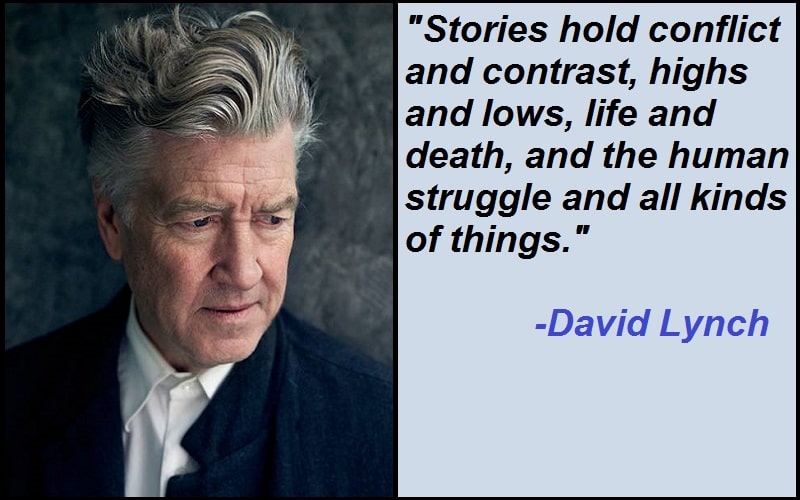 “Meditation is to dive all the way within, beyond thought, to the source of thought and pure consciousness. It enlarges the container, every time you transcend. When you come out, you come out refreshed, filled with energy and enthusiasm for life.”-David Lynch

“My cow is not pretty, but it is pretty to me.”-David Lynch

“I like cappuccino, actually. But even a bad cup of coffee is better than no coffee at all.”-David Lynch

“I discovered that if one looks a little closer at this beautiful world, there are always red ants underneath.”-David Lynch

“Intuition is the key to everything, in painting, filmmaking, business – everything. I think you could have an intellectual ability, but if you can sharpen your intuition, which they say is emotion and intellect joining together, then a knowingness occurs.”-David Lynch

“The mantra that you’re given in Transcendental Meditation you keep to yourself. The reason being, true happiness is not out there, true happiness lies within.”-David Lynch

“I don’t remember my dreams too much. I hardly have ever gotten ideas from nighttime dreams. But I love daydreaming and dream logic and the way dreams go.”-David Lynch

“Transcendental meditation is an ancient mental technique that allows any human being to dive within, transcend and experience the source of everything. It’s such a blessing for the human being because that eternal field is a field of unbounded intelligence, creativity, happiness, love, energy, and peace.”-David Lynch

“I think that ideas exist outside of ourselves. I think somewhere, we’re all connected off in some very abstract land. But somewhere between there and here ideas exist.”-David Lynch

“Cinema is a medium that can translate ideas.”-David Lynch

“If you stay true to your ideas, film-making becomes an inside-out, honest kind of process.”-David Lynch

“I’ve always loved the electric guitar: to hold it and work it and hear what it does is unreal.”-David Lynch

“It makes me uncomfortable to talk about meanings and things. It’s better not to know so much about what things mean. Because of the meaning, it’s a very personal thing, and the meaning for me is different than the meaning for somebody else.”-David Lynch

“More and more people are seeing the films on computers – lousy sound, lousy picture – and they think they’ve seen the film, but they really haven’t.”-David Lynch

“I don’t like Thomas Edison. I’m a fan of Nicolai Tesla.”-David Lynch

“A lot of artists think they want to anger. But a real, strong, bitter anger occupies the mind, leaving no room for creativity.”-David Lynch

“The cinema is really built for the big screen and big sound so that a person can go into another world and have an experience.”-David Lynch

“Some things we forget. But many things we remember on the mental screen, which is the biggest screen of all.”-David Lynch

“I always say Philadelphia, Pennsylvania is my biggest influence. But for painters, I like many, many painters, but I love Francis Bacon the most, and Edward Hopper.”-David Lynch

“You’re right on the money with that. We’re all like detectives in life. There’s something at the end of the trail that we’re all looking for.”-David Lynch

“I’m not a musician, but I play music. So it’s a strange thing.”-David Lynch

“Negativity is the enemy of creativity.”-David Lynch

“The ideas dictate everything, you have to be true to that or you’re dead.”-David Lynch

“I’ve said many, many, many unkind things about Philadelphia, and I meant everyone.”-David Lynch

“You don’t need a special place to meditate. You can transcend anywhere in the world. The unified field is here, and there, and everywhere.”-David Lynch

“An artist makes a painting, and nobody bugs him or her about it. It’s just you and your painting. To me, that’s the way it should be with film as well.”-David Lynch

“The film can’t just be a long line of bliss. There’s something we all like about the human struggle.”-David Lynch

“Sex is a doorway to something so powerful and mystical, but movies usually depict it in a completely flat way.”-David Lynch

“Everyone is on the internet but they’re not all talking with each other. There are groups upon groups out there, but they don’t talk to one another. So while the internet brings everyone into a shared space, it does not necessarily bring them together.”-David Lynch

“What I really like is to be at home, working.”-David Lynch

“Sometimes I get an idea for the cinema. And when you get an idea that you fall in love with, this is a glorious day.”–David Lynch

“Sugar does make people happy, but then you fall off the edge after a few minutes, so I’ve really pretty much cut it out of my diet. Except for cupcakes. I like those.”-David Lynch

“Transcendental meditation is like a car, a vehicle that allows you to go within. It’s a mental technique.”-David Lynch

“I’ve loved music always, and my music fire was lit by Elvis Presley, really, and all that was happening back then.”-David Lynch

“This whole world is wild at heart and weird on top.”-David Lynch

“Life is very, very complicated, and so films should be allowed to be, too.”-David Lynch

“The digital video is so beautiful. It’s lightweight, modern, and it’s only getting better. It’s put a film into the La Brea Tar Pits.”-David Lynch

“I believe in creative control. No matter what anyone makes, they should have control over it.”-David Lynch

“Francis Bacon is one of my giant inspirations. I just love him to pieces.”-David Lynch

“I supported myself by delivering the ‘Wall Street Journal’ and doing odd jobs. I love plumbing and carpentry.”-David Lynch

“A film – especially when it’s a personal film – is going to hit somebody or it’s not. There’s nothing you can do about it.”-David Lynch

“There are only 24 hours in a day, and my top priority is working on my films, but I love short film experiments.”-David Lynch

“People think in Hollywood there’s a family, where everybody gets together talks about stuff and we all know each other, and it’s just not that way at all to me.”-David Lynch

“I didn’t really grow up listening to blues, because I grew up in the Northwest. It wasn’t really the center for blues.”-David Lynch

“Sometimes I get ideas for lyrics in anyplace, but I work a lot in the studio. So I collect little bits of lyrics. I go through the box of lyrics I have and see if something fits.”-David Lynch

“I love the quality, feel and history of film. I love the pictures of the giant cameras and the way it was.”-David Lynch

“I was raised Presbyterian, but I’m not really going to church. I think the experience in meditation is pretty much where it’s at for me.”-David Lynch

“I love music, of course, and many, many, many genres. There are hardly any songs I would say that I hate. There’s a couple, and I don’t even know exactly why I don’t like them.”-David Lynch

“A lot of music doesn’t do one thing or another. It just doesn’t do anything. Then there are those pieces of music that thrill your soul. It’s such a wide range, and it’s really interesting that we all love different things.”-David Lynch

“Most of Hollywood is about making money – and I love money, but I don’t make films thinking about money.”-David Lynch

“Building a set is like building a place, but it’s a temporary place because sets usually get torn down. Kind of unfortunate.”-David Lynch

“Humor is very interesting to me. My films are not comedies, but there’s comedy in them from time to time, absurdities, just like in real life.”-David Lynch

“A filmmaker doesn’t have to suffer to show suffering. You just have to understand it. You don’t have to die to shoot a death scene.”-David Lynch

“The greatest thing my father left me was a love for cutting wood – my love for sawing, especially pine wood.”-David Lynch

“I don’t paint the town red. But when I do go out, people always want to touch my hair. It happens every time.”-David Lynch