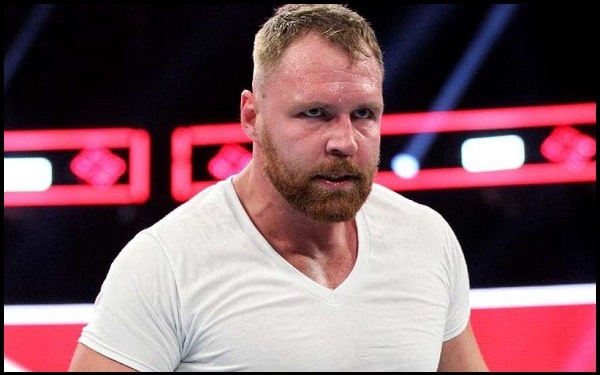 “I have no fear of anybody or anything happening to me in WWE because nothing can be as bad as some of the injuries I went through and some of the grotesque things that have happened to my body.”-Dean Ambrose 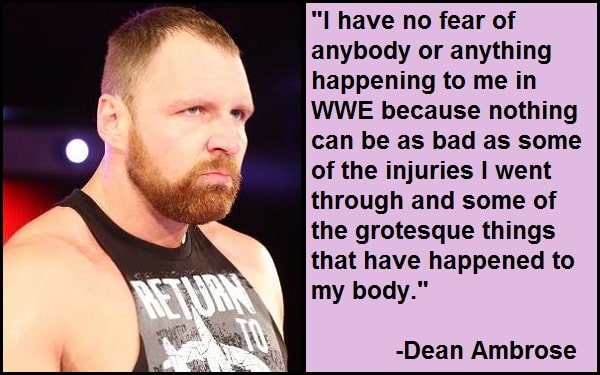 “I’m much more comfortable being hated than being beloved.”-Dean Ambrose

“I think I’m one of the only guys here – I mean, we have so much great talent here, but I can do anything. I can literally do anything. That’s not me being like, ‘Oh I’m so great.’ I’m just like, ‘I know what I’m doing.'”-Dean Ambrose

“I don’t look any further than what’s right in front of me.”-Dean Ambrose

“I wasn’t ‘gifted’ in the way that Brock Lesnar or Roman Reigns or somebody like that is gifted, in that they got the physical attributes and so forth.”-Dean Ambrose

“I always liked the guys who lasted a long time in the match and had endurance. People like Ric Flair going an hour at the 1992 Rumble, or Shawn Michaels and the British Bulldog being one and two in 1995 and both lasting until the end.”-Dean Ambrose

“In North America, there aren’t too many big places to go, so you find that pretty much all of the best talents in the world end up filtering through WWE.”-Dean Ambrose

“Ziggler is one of those guys who don’t get all of the credit he deserves for being so good consistently for so long.”-Dean Ambrose

“There are times when you got to put a little ‘extra’ in, especially on a card at WrestleMania or SummerSlam because it’s no time to hold anything back. You have to pull out all of the stops.”-Dean Ambrose

“A lot of people feel they spend enough time watching me go through the good, the bad, and the ugly, so they feel like they know me and are a part of it. I’m kind of like a part of people’s families. You can’t buy that kind of connection with people.”-Dean Ambrose

“I know a lot of guys say that when they are younger – ‘I’m gonna get it, get my money, and get out’ – and then end up wrestling until they’re 50. But that could end up being me, too. I can tell you I want to get out early and end up eating my own words. All of a sudden, I’m 50, and I’m still walking out there.”-Dean Ambrose

“It is very easy to get hurt in a match like the Royal Rumble. It seems very run of the mill, but it’s always the stupid stuff where you get hurt.”-Dean Ambrose

“In a situation like the Rumble, I’m looking around constantly and keeping my back against a rope as much as possible so I can see what’s going on.”-Dean Ambrose

“The first time that somebody handed me a sheet of paper with a promo on it, it was like a ‘throw up in your mouth’ kind of moment. And it’s not, like, their fault, you know? It’s not the writers’ fault. But if was my world, there would be no written promos; there’d be no scripts.”-Dean Ambrose

“A crowd urging you on to do well can be very encouraging. It’s very fun. It can be a really cool feeling.”-Dean Ambrose

“I’m not some schmuck they just hired and threw down in the Performance Center and gave him an entrance or anything that like. I’ve been around enough and have enough experience; I know what I’m doing pretty much.”-Dean Ambrose

“You have to take a certain pride in your work.”-Dean Ambrose

“You’ll find that all WWE performers when they go on to any television show or set of any kind, we’re more prepared than we get credit for. We don’t get enough credit.”-Dean Ambrose

“If I got hit by a bus tomorrow, I get to say I was in a movie.”-Dean Ambrose

“I’m doing some more dangerous stuff on a weekly basis than professional stuntmen are doing.”-Dean Ambrose

“It’s all so surreal seeing yourself in a video game.”-Dean Ambrose

“I kind of miss that whole NXT thing. When I was there, it was Florida Championship Wrestling with Seth Rollins and the other guys who were there. I wrestled on, like, local-access Florida TV in front of 30 people. It was a tiny little situation.”-Dean Ambrose

Best Quotes by Dean Ambrose About

“It’s not like I’m not constantly dealing with a litany of injuries that I have myself. If it’s not one thing, it’s another thing, but I’ve just been able to keep rolling.”-Dean Ambrose

“I’ve always fed off negativity and wanting people to hate me. That attitude really fueled me for my entire career. So being a guy that people like and want to cheer for is the weird part.”-Dean Ambrose

“You’re always going to get comparisons. Everybody comes out and says, ‘He’s the next so and so,’ or, ‘He reminds me of so and so.’ I have so many influences and stuff in my brain, who knows what’s going to pop in and come out.”-Dean Ambrose

“From day one, The Shield was a vehicle. It wasn’t, ‘This is what we’re doing for the rest of our lives.’ It was, ‘This is the vehicle we’ll use to bust into WWE, to ride to the top of it, and then we fight each other.’ That was always the plan.”-Dean Ambrose

“I’d rather have too many weird fans than no fans at all.”-Dean Ambrose

“The calmest part of my day is right before a match.”-Dean Ambrose

“If you’re a wrestling fan, and you watch it on TV, that’s great, but there’s nothing quite like being there live.”-Dean Ambrose

“I can’t remember a time when wrestling wasn’t the thing that I watched. As far back as my memory goes, I was already obsessed with wrestling.”-Dean Ambrose