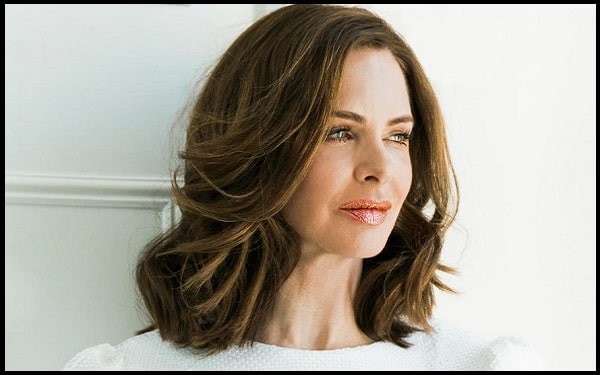 “I love the idea of cooking, but I don’t like using recipe books, so I’ll put a mish-mash together, and it might be amazing by total accident, or it will be a catastrophe.”-Trinny Woodall 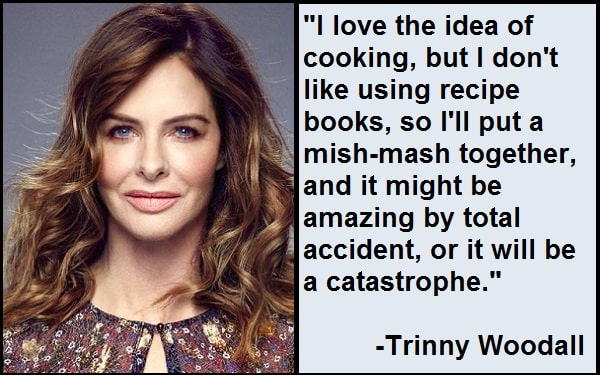 “English women would rather go out and buy a washing machine than shop for clothes.”-Trinny Woodall

“Don’t look at your legs and think: ‘They’re fat.’ Think: ‘These things carry me around all day, and I don’t have arthritis. Oh, and I’ve got great ankles.'”-Trinny Woodall

“I’m having to learn to get the balance right, because if you want a full-time career, and you also want to be a mother who is there for your child, then you have to make sure that when you do spend time together, you’re really there for them.”-Trinny Woodall

“I am very precise about what food I like. I’m very much a nursery-food person, and really hate chichi dishes.”-Trinny Woodall

“When you’re with a big TV channel, there’s a sense of having to behave in a certain way in order to get audience figures.”-Trinny Woodall

“I’m very conscious about putting good food into my body. Years ago, I went to see an amazing healer called Allah, who could read your body. She told me that I can’t absorb vitamins very well, and I have to eat the right things to get my vitamins. I’ve always remembered that.”-Trinny Woodall

“There were times when rehab and the halfway house were very, very tough, but I never felt that I wanted to leave.”-Trinny Woodall

“You don’t find women with great confidence dressed as if they don’t care.”-Trinny Woodall

“My pain threshold is quite high when it comes to vanity.”-Trinny Woodall

“The idea of what a feminist is has changed so much that there needs to be a new word for it.”-Trinny Woodall

“For me as an individual, it’s important that I have a career as a role model for my children, that I earn my own money, and I spend it prudently and imprudently.”-Trinny Woodall

“So many women buy these boxy, shapeless jackets. I always tell them to buy a jacket one size too small to get the right fit.”-Trinny Woodall

“Shorts are practically a uniform in every woman’s closet. Tailored shorts are okay for running around, and if you’re 18, you can get away with cut-offs. But it’s very easy to make a mistake with shorts.”-Trinny Woodall

“Many women are pear-shaped and tend to wear jeans that are too loose. They need to focus on what jeans will re-proportion their body.”-Trinny Woodall

“Even my basic, basic wardrobe is still pathetically color coordinated. It just is. That is just me.”-Trinny Woodall

“I would never go out in track bottoms and a baggy T-shirt.”-Trinny Woodall

“Diets are rubbish. I eat healthily and often have a day when I stuff myself.”-Trinny Woodall

“Every morning, I have a drink of spinach, blueberry, celery, carrot and Gillian McKeith energy food with linseed.”-Trinny Woodall

“To me, it is like a diabetic with insulin. If that diabetic stops taking insulin, they will die, and I believe that if I don’t follow the 12-step program, I will regress, and that could eventually be the death of me.”-Trinny Woodall

“To me, the word ‘workaholic’ is a negative word.”-Trinny Woodall

“I think I’m very focused and am quite a good multitasker, and I’m quite driven in knowing what my responsibilities are to my family and knowing what I’ve got to do to do that.”-Trinny Woodall

“In some ways, I’m slightly like a single parent, so I need to be able to provide for my family.”-Trinny Woodall

“I don’t have a problem with the stories saying I’m skinny at all.”-Trinny Woodall

“The first time I was given money to shop for myself, I was 13 and staying with my godmother in New York. I went to Clinique and bought the three-step acne program and felt so grown-up.”-Trinny Woodall

“Ottolenghi sells lots of delicious sweet things, but my daily addiction is their unbelievable dark chocolate salted caramel biscuits. They’re the best things in the world – I go through half a packet every night. I bring them out after pudding at dinner parties.”-Trinny Woodall

“I want to feel I have the energy I will need as an older mother having a younger baby. It’s really important that when I’m 51, and my daughter is 10, that I feel I can still run around and do things with her, and feel the energy of a slightly younger woman having their kids at school.”-Trinny Woodall

“To me, a yummy mummy is a mum in her twenties, like Donna Air.”-Trinny Woodall

“I enjoy waking up in the morning and thinking, ‘Who do I want to be today?'”-Trinny Woodall

“I find it easy to dress with other women, but when it comes to myself, I find it very difficult. I used to have no particular interest in clothes. Now I enjoy it more and pay much more care and attention. But I do get it wrong lots of times, and I’m like every other woman: learning from experience.”-Trinny Woodall

“I can’t remember a time when I didn’t love fashion. As a child, I was always particular about what I’d wear. I remember feeling most aggrieved that I had to put on a dull uniform to go to boarding school.”-Trinny Woodall

“When I was 18, my mum gave me all the clothes she’d had made at the famous haute couture fashion label, House of Worth, in Paris. Of course, I eventually trashed them all.”-Trinny Woodall

“I’d love to say fashion faux pas differ from country to country, but they don’t.”-Trinny Woodall

“I have a big bum and chunky calves. My husband says I’ve got elephantiasis of the legs.”-Trinny Woodall

“I went on Accutane, which is very strong. Your sebaceous glands dry up, you can’t exercise, and you have very dry lips. But it was a miracle, and it worked.”-Trinny Woodall

“In America, there’s a program called ‘The Swan.’ They take 12 ugly people and call them ‘ugly ducklings.’ They spend six months and have everything done – plastic surgery, teeth, everything. And then they have this moment where their family is brought in, and they are revealed. It’s scary.”-Trinny Woodall