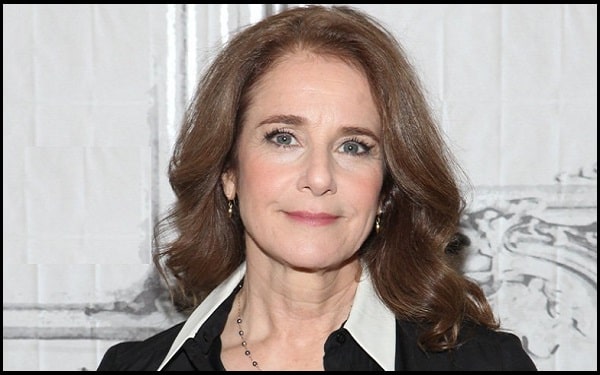 Debra Winger Quotes:- Debra Winger (born May 16, 1955) is an American actress. She starred in the films An Officer and a Gentleman, Terms of Endearment, and Shadowlands, each of which earned her a nomination for the Academy Award for Best Actress.

“I never thought I would start working again, and I did, but it was really hard, and I don’t know that I would advise anyone to step back the way I did.”-Debra Winger 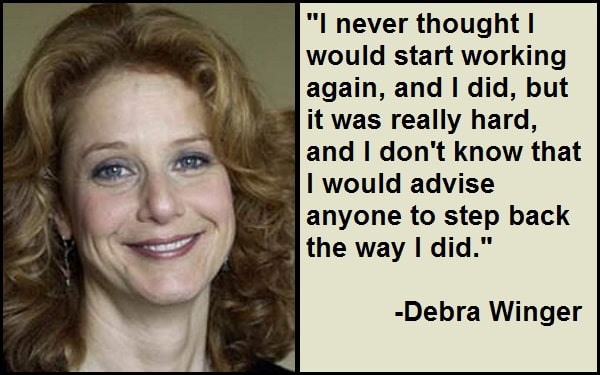 “Just because we’re on schedule is no reason to shoot bad acting. Someone once said to me, ‘You’re inconsiderate.’ And I said, ‘Inconsiderate? Bad acting is the ultimate inconsideration.’ It’s a collective slap to a million faces at the same time.”-Debra Winger

“I was never afraid of failure after that because, I think, coming that close to death you get kissed. With the years, the actual experience of course fades, but the flavor of it doesn’t. I just had a real sense of what choice do I have but to live fully?”-Debra Winger

“I just live in the truth and think that every moment counts.”-Debra Winger

“Show me the story. I just want to tell a story that pulls me forward.”-Debra Winger

“I was the all-American face. You name it, honey – American Dairy Milk, Metropolitan Life insurance, McDonald’s, Burger King. The Face That Didn’t Matter – that’s what I called my face.”-Debra Winger

“My grandmother gave birth to 13 children and I come from a long line of women who gave birth in their 40s.”-Debra Winger

“I am one of the happiest people I know. And that’s a weird place to have arrived at from being a depressed Jewish kid.”-Debra Winger

“I always loved working as an actress, but I didn’t understand why I couldn’t just opt-out of being famous. And then I realized you can, and I think I did. And eventually, I came to understand that you can do that and also keep working.”-Debra Winger

“I think when it comes to Botox and surgery, actresses should do it or not do it, but be honest about their choices.”-Debra Winger

“Never say never, but the thought of electively cutting oneself is beyond my grasp, and I also object to it politically. Denying the lines on our faces makes a comment about age and wisdom I don’t care to make.”-Debra Winger

“I think it’s a little irresponsible for women who choose surgery to then say they can portray the average woman on the street, because if the average woman can’t afford those treatments, then she’s going to say, ‘I’m 53 and I don’t look like that,’ and start thinking she’s ugly or inadequate.”-Debra Winger

“People who make lots of money at what they do should just shut up about it.”-Debra Winger

“If you want to get a facelift, get a facelift. Don’t sit there and talk about why you got it because of the pressure.”-Debra Winger

“You see people on TV flying into places just to pick up a baby or brush some flies away. That’s great if they can bring that issue to public attention. But that’s not what I wanted to do. I was interested in committing to something that I could function in whether I was “-Debra Winger or not. Because nobody might care about that next week.”-Debra Winger

“I used to love going on a junket and promoting a film when it was not a 24-hour news cycle, and when there weren’t so many media outlets. You could actually talk about the film.”-Debra Winger

“When I was younger I probably didn’t understand something basic about tact, but I think it kept faint-hearted people at arm’s distance and that’s not such a bad thing, because life is short and I know the kind of people I want to work with.”-Debra Winger

“People pay to see movies with women looking beautiful, but I think there will be a place for me to play women looking at my own age.”-Debra Winger

“When you connect with a cause, it’s like falling in love.”-Debra Winger

“I do not need a lot of money to be happy.”-Debra Winger

“I have enjoyed a wonderful run in films, so far, and I may, at some point, come back. But it will be in my own time and in my own style.”-Debra Winger

“In the early part of my life, I carried the flame for fiery women: perky women who were not dumb.”-Debra Winger

“It’s no secret that I didn’t love ‘An Officer And A Gentleman’ then, and I certainly don’t love it now, so at least no one could accuse me of being inconsistent.”-Debra Winger

“I had a very insightful friend who warned me back when I stopped reading scripts, ‘It’s easier to change directions while you’re still moving.’ If you stop, it’s harder to get started again. I still don’t think I made the wrong decision, but he was right.”-Debra Winger

“I don’t think it is worth trying to look 10 years younger through surgery.”-Debra Winger

“An actress in a film starts every day with an hour and a half in front of a mirror, with hair and make-up and costumes.”-Debra Winger

“A good marriage is different from a happy marriage.”-Debra Winger

“There’s a small club of women who are willing to age.”-Debra Winger

“Ultimately, however, the script an actor enlivens is someone else’s words.”-Debra Winger

“I want to start a trend of women as we really look. Some good things, some not so good. I am tired of looking at frozen faces.”-Debra Winger

“I just want to sleep and eat, and learn about what’s going on in the world.”-Debra Winger