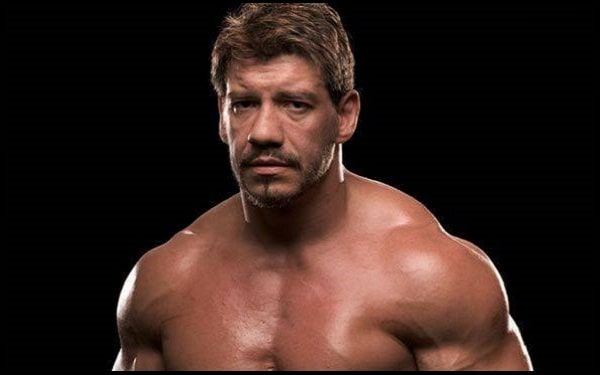 “Being the youngest, I was a bit of a mama’s boy. I was really protected as I grew up, almost like I was in a bubble.”-Eddie Guerrero 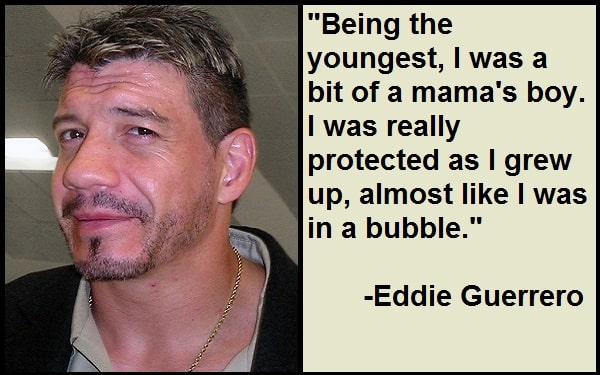 “I’ve got to be happy with myself when this ride is over.”-Eddie Guerrero

“To me, wrestling is therapy. No matter how bad my personal situation is, when I step into the ring, all my troubles disappear. My baggage stays in the back where it belongs.”-Eddie Guerrero

“There is one good thing about reaching the bottom. When you get there, there’s nothing left to do but fight your way back up or die.”-Eddie Guerrero

“It took more strength and hard work than I would’ve believed myself capable of, but with God’s grace and strength, I managed to lift myself up and become a better person than I’d ever imagined – I believe I have become a loving husband, a compassionate father, and a stronger wrestler.”-Eddie Guerrero

“Wrestling just comes naturally to me. It wasn’t like there was this moment where I said, ‘This is what I’m going to do.’ It’s just what I did. It was my life.”-Eddie Guerrero

“In my freshman year of high school, I don’t think I had a single date. I was really shy, really timid and quiet. I had my first real date when I was a sophomore, with a girl from church.”-Eddie Guerrero

“Since the day I was born, wrestling has sustained me and my family. It’s the way my father fed me; it’s the way I feed my kids. More importantly, wrestling is my greatest release. It’s been such a blessing for me. I can step into the ring and let it all go – all my anger, all my frustration, all my pain.”-Eddie Guerrero

“I honestly can’t describe what goes on in my head when I’m out there. People who don’t wrestle can’t possibly understand it. When I’m in the ring, I don’t feel any pain. I’m in another world out there.”-Eddie Guerrero

“The twenty minutes or more we spend inside the ring, that’s the fun part. It’s the rest of our lives that’s the real battle – the ruthless backstage politics, the constant traveling, the endless mental and physical aches and pains.”-Eddie Guerrero

“Dad always enjoyed sports, and he decided to join a Guadalajara gym to learn how to box. What he didn’t realize was that they didn’t teach boxing at that particular gym – they taught ‘Lucha libre.”-Eddie Guerrero

“As I grew up, Dad was more involved in training than promoting. He brought the same style to his training that he did to being a father – strong and strict.”-Eddie Guerrero

“I’ve always had an aptitude for wrestling. I can’t explain it – it’s like a gift. To this day, I don’t always know how or why I do certain things.”-Eddie Guerrero

“When I started wrestling, I hounded my dad to teach me. Eventually, he gave in, but he was careful to instill in me a respect for other wrestlers. He wanted to be sure I wasn’t going to hurt anyone.”-Eddie Guerrero

“I couldn’t change by myself. I needed my faith and belief in Christ to give me the strength to break free and allow people to help me to change.”-Eddie Guerrero